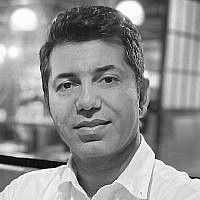 The Blogs
Farhad Rezaei
Apply for a Blog
Advertisement
Please note that the posts on The Blogs are contributed by third parties. The opinions, facts and any media content in them are presented solely by the authors, and neither The Times of Israel nor its partners assume any responsibility for them. Please contact us in case of abuse. In case of abuse,
Report this post.

Western media reported that the Islamic Republic had abolished the brutal Islamic Guidance Patrol (Gasht-e Ershad) program and interpreted it as a concession to the ongoing revolutionary movement, which calls to overthrow the Islamic Republic. Although the program is not abolished but paused, there are indications that the regime is trying to enforce the compulsory hijab through a new method, strikingly similar to the Apartheid in South Africa.

Countering this new but shameful and inhumane treatment of women demands global solidarity and requires significant economic and political pressure from the international community, especially the United States.

To begin with, the brutal treatment of women over the compulsory hijab has not been started with the establishment of the Gasht-e Ershad in 2005. As I wrote elsewhere, the mistreatment of women began in the early years of the Islamic Revolution when Khomeini made the hijab mandatory and the chador as “the best hijab.” When Iranian women protested the new mandate, they were brutally dispersed, and some were arrested. Khomeini followers chanted, “Ya Rusari Ya Tusari,” which means “Either a cover on the head or a beating.” Supervisory “committees” roamed the streets and punished women they deemed poorly covered. In 1983, the Islamic Majlis decided that unveiled women would be punished with 74 lashes; as of 1995, they could be imprisoned for up to 60 days. Yet, women did not comply, indicating the difficulties of mass re-socialization to strict Islamic values. But the regime decided to use force as manifested in the Khomeinists’ slogan, “Ya Rusari Ya Tusari.”

Over time, some pragmatist figures in the regime counseled a softer line. Still, Ayatollah Khamenei and the highly influential archconservatives such as Ayatollah Mohammed Taqi Mesbah Yazdi and their followers urged to enforce the dress code to its fullest. Women who defied modesty ordinances, including veiling, were brutally attacked by Law Enforcement, the Basij militia, and members of the Ministry of Intelligence and Security (MOIS) on the streets.

Women caught violating the dress code were lashed with a whip, sentenced to prison, and fined to pay 9 million rials ($260) in cash. Women drivers could have their cars impounded if caught driving with a poorly fixed veil or have taken their veil off. Young girls were forced by the Islamic Courts to undergo a “virginity exam” and criminal fingerprints.

That the Islamic Republic defies the dismantlement of compulsory hijab is insane but makes sense for the regime. Implementing such a discriminatory law allows the regime to exercise control over Iranian women. Removing it, however, could trigger the fall of the regime. Hossein Jalali, a member of Islamic Majlis, spoke to an audience, saying, “Hijab is our flag. The collapse of the Hijab is the collapse of the flag of the Islamic Republic.”

Masih Alinejad, a prominent women’s activist, compared the importance of compulsory hijab for the Islamic Republic with “the Berlin Wall” to the Soviet communists. To recall, the fall of the Berlin Wall (Mauerfall) marked the falling of the Iron Curtain and one of the series of events that started the fall of communism in Eastern and Central Europe. “If this wall is brought down,” Masih argued, “the Islamic Republic won’t exist.”

For this reason, despite four decades of civil resistance, abolishing the discriminatory law has never been an option for the regime. They promised to increase the cost of not having a Hijab.” Ali Khanmohammadi, the spokesman for Iran’s headquarters for Promoting Virtue and Preventing Vice, which oversees the implementation of religious edicts, said the regime intends to confront violations of hijab via a different method. This new method requires private and state-controlled institutions to take responsibility for implementing the hijab law moving forward.

Based on the new method, governmental institutions should deny social services to women violating the dress codes. Government employees who give service to unveiled women would be dismissed from their position. This practice has already been implemented in some provinces. A manager at a state-owned bank in Qom province who had provided bank services to an unveiled woman was removed from his position by the governor’s order. The bank accounts of women caught three times without wearing the hijab will be blocked, and their assets will be frozen.

Similarly, in the private sector, the government would impose the burden of enforcing the hijab law on ordinary people. Business owners, school managers, and shopkeepers must refuse to provide services to women who defy the mandatory hijab or risk the forced closure of their businesses. Unveiled women would be banned from setting up businesses or participating in government-organized programs.

This parallels the apartheid regime imposed on black people and other people of color by the whites in South Africa. To recall, the apartheid regime prohibited black people from entering urban areas. It called for the separate development of the different racial groups. It severely disadvantaged the majority of the population simply because they did not share the skin color of the rulers. Blacks were forced to carry Passes so their owners and the local authorities could restrict their movement in certain areas. They were prohibited from setting up businesses in white areas.

Undermining this barbaric system in South Africa was only possible through international solidarity. The United Nations played an essential role in ending apartheid by imposing political pressure, which isolated the South African government from the community of nations.

The United States Congress enacted the Comprehensive Anti-Apartheid Act of 1986 and imposed tough sanctions against the white minority rule, which crippled the machinery that upheld apartheid.

As a result of political pressure and economic sanctions, the South African government eventually had no choice but to dismantle the apartheid regime.

The United Nations and the US congress can play a similar role in undermining the Islamic Republic and ending the apartheid regime in Iran. They must impose global sanctions, isolate the Islamic Republic from the international community and condemn the regime’s brutalization and oppression of Iranian women in the harshest tune.

Engagement could not nudge the apartheid regime toward democratization in South Africa; it won’t work with the Islamic Republic either.

Farhad Rezaei is a senior fellow at the Philos Project.

About the Author
Farhad Rezaei is a senior research fellow at The Philos Project, where his work focuses on Iran and violations against religious minorities in the Middle East. He is the author of numerous books and articles on Iran’s foreign and defense policies. His writings have appeared in the prestigious journals, including the Bulletin of the Atomic Scientists, Harvard Iran-Matters, Middle East Policy, the National Interest, Center for International Policy Studies (CIPS), Journal of International Affairs, the Hill, the Providence, and BESA Center among others. His latest project, "The Invisible Jihad: the treatment of Christians by Iran proxies," was published by the Philos Project.
Related Topics
Related Posts
Farhad Rezaei