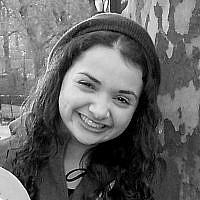 I’m sitting now at Har Herzl. I’ve been here before; as part of a day tiyul, on Yom HaZikaron. I’ve walked beside these kvarim and strived to connect to the magnitude of the sacrifices made on behalf of the land of Israel and its people. Today’s excursion though, feels completely different.

Today the pain of war is so fresh, so real. I just attended the funeral of Yuval Haiman, a 21 year old soldier from Efrat who fell in battle yesterday, the 24th of Tammuz. I’m searching for the words to express the event, and can’t think of anyone to address them to other then Yuval.

Yuval, I never had the privilege of meeting you personally. How strongly do I wish that I could have gotten to know you anywhere but here…at your funeral. This morning, I learned so much about the holy life you led. You were blonde, the beloved bechor. Everyone kept mentioning that you embodied the trait of tzniut, modesty. I listened to your brother cry about how much he’ll miss your erev Shabbat phone calls. You always comforted everyone else, even in the hardest of times, reassuring them that “hakol y’hiyeh b’seder,” everything will be all right. Your mother expressed that there wasn’t one day that went by that she didn’t tell you how much she loved you. She courageously said that she was sending a hug to the 26 other mothers grieving their children today.

I heard your younger sister scream out a true bechi tamrurim, a bitter cry unlike anything I’ve ever heard before. I’m certain that her tears ascended straight to shamayim.

Yuval, your death defies time. You join a legacy of individuals who, throughout Jewish history, were willing to die for the values they stood for. I learned that your beloved great-grandfather was also killed fighting for Israel, he in the War of Independence.

You gave your life during the three weeks leading up to the destruction of the Beit haMikdash. There have been years in which I’ve felt so disconnected from the suffering of this time period. Today though, the emotions of churban have returned.

I’ve realized that the best way we can continue what you’ve started is by living the values which you embodied. The dark exile which we are still experiencing was caused by baseless hatred. We should need no ulterior motive to treat each other with dignity and respect. May we live and love indiscriminately in your honor. Thank you for reminding me of this invaluable lesson.

Yuval, you were deeply loved and you will be deeply missed.

At the funeral, the words Baruch Dayan HaEmet were countlessly repeated- Blessed is the True Judge. I know that there is a grander plan, a Divine reason for Yuval’s passing.  Today though, the ambiguity of the Truth pierces all of our shattered souls.

May we soon see the day where the reason behind all of this suffering is revealed. A day where can live freely in our land without needing to pay such a heavy toll.  A day where this et milchama is replaced by an everlasting et shalom.