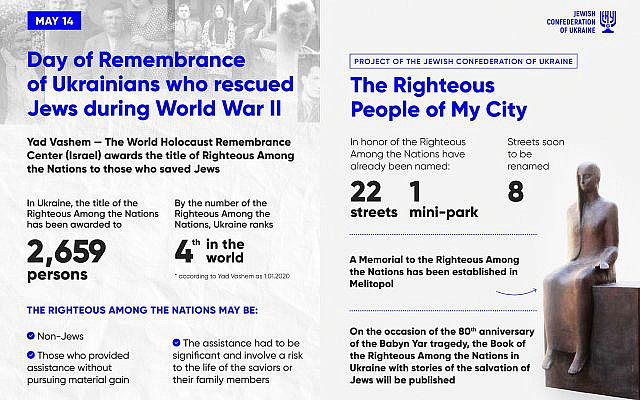 May 14. Picture by Jewish Confederation of Ukraine
Caesar Katz was only four years old in 1941. His mother died in childbirth, his father, after being reported by the caretaker of the apartment block where the Katz family lived, was shot at Babyn Yar, and his nanny Anastasiya Fomina took care of Caesar. She was hiding with a boy in ruined basements until she heard about the orphanage at 19, Predslavinskaya Street, in which, according to rumors, there were already many Jewish children who had escaped the Babyn Yar.
The orphanage was managed by Nina Gudkova, and among 70 of the children she cared for, 12 were indeed Jews. One of them was Caesar, whom Anastasiya Fomina gave over to Nina Gudkova for more reliable protection. All 12 Jewish children survived.
This is just one of the 2,659 stories of the rescue of Jews by Ukrainians.
Today, Ukraine for the first time marks the Day of Remembrance of Ukrainians who rescued Jews during World War II.
Using the generally accepted definition in the world, this day can be considered the Day of the Righteous Among the Nations in Ukraine. This is how the Yad Vashem – The World Holocaust Remembrance Center, since 1953, has called non-Jewish people who, during the Holocaust, despite the real threat to their own lives, could not remain indifferent to the extermination of the entire nation, whose only fault was that its representatives were born Jews. Anastasiya Fomina and Nina Gudkova have also received this honorary title.
The establishment of the Day of the Righteous Among the Nations in Ukraine namely in 2021 is symbolic: in a few months, it will be 80 years since the Babyn Yar tragedy, which claimed the lives of at least 100,000 people, most of whom were Jews. Without a doubt, there could have been many more victims of the Babyn Yar, if not for the people of Kyiv, who provided shelter to Jews fleeing from extermination.