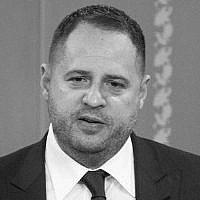 The Blogs
Andriy Yermak
Apply for a Blog
Advertisement
Please note that the posts on The Blogs are contributed by third parties. The opinions, facts and any media content in them are presented solely by the authors, and neither The Times of Israel nor its partners assume any responsibility for them. Please contact us in case of abuse. In case of abuse,
Report this post.

Putin says he’s coming to “de-nazify” Ukraine. Ukraine, with the third-largest Jewish population in Europe and the fifth-largest in the world. Ukraine, with a Jewish President and formerly a Jewish Prime Minister. Ukraine – the only country that was once part of the Soviet Union that can make these claims.

The history of the Jewish people in Ukraine is not new. It goes back to the time of Kyivan Rus’ at the turn of the 10th century. These early Jews gave rise to Hasidic Judaism, which today is practiced across Europe and in Israel and the United States. Uman, a city in Cherkasy Oblast in central Ukraine, is a pilgrimage site for Breslov Hasidic Jews that regularly attracts throngs of tourists.

Despite the vibrancy of the Jewish community in Ukraine, history has not always been peaceful for Ukraine’s Jews. Jews have long been targeted in Ukraine, as elsewhere in Europe, culminating in the mass atrocities of the Holocaust. The site of the Babyn Yar memorial in Kyiv is dedicated to the hallowed ground that claimed more than 30 thousand Jewish souls murdered by the Nazis.

Nearly 80 years after Babyn Yar, Ukrainians overwhelmingly elected Volodymyr Zelenskyy, a Jewish man, to be their President, despite Russian efforts to sow antisemitism in Ukraine during the many election cycles. Last year, Ukraine’s Rada overwhelmingly passed a law criminalizing antisemitism.

Now, as the Russians target the Jewish faith’s most sacred places with bombs exploding over Babyn Yar and Uman, they destroy the tolerant peaceful society that modern Ukrainians built.

The invaders are trying to lay siege to Kyiv, just as the Nazis did to Leningrad. To me, it’s very personal: both of my grandparents survived the blockade.

It is now all in danger of being eradicated – wiped from the face of the earth.

The Jewish people know all too well the threat of being eradicated. Today, Ukraine is Israel. Ukrainians are falling victim to Russia’s evil war just as the Jews fell victim to Nazis who wanted to eradicate all Jews. The Russian invaders are motivated and instructed to commit acts of genocide against Ukrainians.

Putin and his cronies have made it clear that they believe there are no Ukrainians. They reject our existence. They are calling for Ukraine – its citizens, its culture, its history – to vanish. And the terror Russia is raining down on us is aimed at either making us bow before Putin or stop existing. There is no alternative in his designs.

After a week of fighting, however, the Russian invaders are beginning to realize that Putin’s designs are flawed. They cannot erase the Ukrainian identity. Average Ukrainians are fighting back against the Russians with their bare hands and bodies as shields staring down tanks. The Ukrainian army is defending the country – despite much-needed weaponry and armaments still not reaching Ukraine’s soldiers. The Russians can destroy us and our country, but they cannot unmake Ukraine. They do understand it – and try to blackmail Ukraine, Europe and the world with the specter of nuclear disaster as they pound powerplants with shells and bombs.

During the Arab-Israeli war of 1948, the international community rallied to Israel’s side. Jewish American families delivered aid, weapons and planes to their Israeli brethren. This assistance helped the Jewish people and the Israeli state survive. Today, we implore Jewish communities and families across the world to come to our aid.

We need more weapons and we need a no-fly zone over Ukraine – immediately. The Ukrainian forces are smashing one Russian convoy snaking its way through Ukraine after another. But the forces are anything but equal. The invaders have the potential to decimate the heart of Ukraine. We cannot fend off the assault that is surely coming with our bodies alone. We need the international community to impose economic costs on Putin and his regime the likes of which the world has never enacted. We ask for a full embargo of Russian oil and all exports to the US and Europe. While we recognize the requests are not without costs, we know the pain today will be nothing compared with that of tomorrow if these measures aren’t enacted.

Putin will not stop at Ukraine. He has the whole former Soviet Union and all of Central and Eastern Europe in his sights. Today it’s the Ukrainian people. Tomorrow it will be another people he wants to eradicate.

We call on Israel and the international community to remember the words “never again” and act decisively to ensure history does not repeat itself in Ukraine. Ukrainian Jews, Ukrainian Christians, Ukrainians of all religions and ethnicities need your help so we can defend ourselves, our common memory and our future. For Ukraine, and for all of humanity.