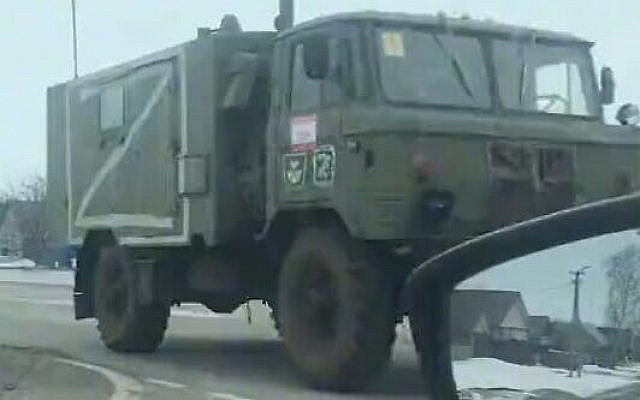 Two weeks ago, the Holocaust memorial at Ponar (in Lithuanian Paneriai) was desecrated twice, once on March 31, and a second time three days later on April 3. Ponar, which is located about 12 kilometers (some 7.5 miles) from the Lithuanian capital of Vilnius (Vilna in Yiddish and Hebrew) is the Holocaust memorial site for approximately 70,000 Jews, mostly from Vilna and its environs, and as such is the largest site of its kind in Lithuania, which explains its iconic status. The manner in which it was desecrated was particularly insidious: there was no graffiti denying the Holocaust and no antisemitic slogans, such as “Juden Raus” [Jews Out], appeared. Instead, the perpetrators smeared the letters “Z” and “V” on the monuments at the site.

Most foreigners would not understand the meaning of these letters, but for local residents and Eastern Europeans, the message is crystal clear. These letters, which are painted on Russian military vehicles, ostensibly indicate support for the Russian military campaign in Ukraine. In Lithuania, a small Baltic country, which borders on Russia, and cannot possibly defend itself against an invasion by its huge neighbor, support for the invasion of Ukraine is tantamount to high treason. Painting the letters on the memorial is tantamount to claiming that the Jewish community, whose memorial it is, favors the Russian invasion.

In other words, it is an extremely dangerous accusation that can only increase the vulnerability of the small, local Jewish community and lead to increased antisemitism and even physical attacks. In fact, one of the strongest motivations of Lithuanian Holocaust perpetrators to participate in the annihilation of their Jewish neighbors was the accusation that Lithuanian Jews had sided with the Communists during the first Soviet occupation of the country (June 1940 to June 1941). Indeed, the same accusation had played an important role in the mass deportations of Lithuanians to Siberia the week before the Nazis invaded.

The offensive graffiti was very quickly cleaned up in each case, but, in the meantime, those responsible have not yet been apprehended. This is hardly surprising in a country which has been one of the worst offenders when it comes to Holocaust distortion, and has not punished a single local Nazi perpetrator since it obtained independence. All one has to do is carefully analyze the response of Prime Minister Ingrida Šimonytė to understand how deep the problem of Holocaust memory is in Lithuania. Without any ostensible proof, she declared that the crimes were a “clear provocation aimed at antagonizing the public in Lithuania,” thereby absolving Lithuanians of any possible responsibility for the outrageous desecration of Holocaust memory there, though it also quite possibly jeopardized the physical security of Lithuanian Jews. Worse, that was only the beginning.

According to Šimonytė, “In one of the most tragic places in Lithuania’s history, where the Nazis and other criminals murdered thousands of innocent people, the provocateurs have splashed yet another symbol of hatred,” she said in a statement issued almost a week after the first desecration took place. Is that an accurate description of the tragedy of Ponar? We know who the Nazis were, and we know what role they played in the Final Solution in general, and in Lithuania in particular. But who are these anonymous “other criminals,” who, according to Šimonytė were responsible for the annihilation of 70,000 Jews? Has she never heard of the infamous “Ypatinga burys,” (the special ones), the Lithuanian mass murder squad, one of the worst in the history of the Shoah, who carried out the murders at Ponar? There is no doubt about their role, or for that matter the role of more than 20,000 Lithuanian collaborators who participated in the mass murder of approximately 90 percent of their Jewish fellow citizens.

Šimonytė’s speech is hardly surprising. With the leaders of Russia and Ukraine hurling insults with Holocaust connotations at each other week after week, and marshaling false comparisons to the Shoah to try and enlist sympathy and support, the accuracy of the historical narrative is being steadily eroded. In the meantime, all we can do is speak out and protest, but when this conflict is over, we will have a difficult task when it comes to rebuilding and fortifying the historical truth of the Nazi campaign to annihilate the Jewish people.