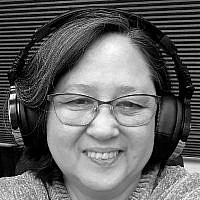 The Blogs
Rachely Rachewsky Scapa
Apply for a Blog
Please note that the posts on The Blogs are contributed by third parties. The opinions, facts and any media content in them are presented solely by the authors, and neither The Times of Israel nor its partners assume any responsibility for them. Please contact us in case of abuse. In case of abuse,
Report this post.

Today and tomorrow, Israel and the Jewish communities around the world will mark Yom HaShoah, the Holocaust Remembrance Day when we remember the 6 million Jews who were murdered by the Nazi regime during World War 2.

Radio stations, TV channels, and newspapers in Israel will broadcast documentaries, portraying the stories of those who survived the horrors of the Holocaust. By 10am IT Tuesday, April 8th, the country will stand still as the siren will sound all over Israel, and we will STOP. Stop driving, talking, working, walking.

STOP! For two minutes, we will stand still, and listen to the silent cry of our forefathers who were killed in a very systematic and methodic way. And then, we shall continue with our daily affairs. But we will remember, and keep up our good work.

There is yet another group, a vast one, which should not be forgotten: the Christians who actively saved many Jews, just because the Bible tells them so. Far too many were the Christians like Corrie Ten Boom who risked their lives in order to hide Jewish families or individuals. They truly lived their love of Zion, as they saw in the Jewish people the fulfillment of G-d’s promises to mankind. And they saw antisemitism for the evil it is.

Nowadays, antisemitism is raising its ugly head again – in fact, it never died.

I come across Israelis who are taken by surprise at the news of acts of hatred towards the Jewish people in the country considered the greatest friend of Israel, the United States of America, in some cases coming from so-called Christian groups. And then, they tend to tag the whole Christian community as “Jew hater”. But NO!

Allow me to tell you about my experience, both as a Jew and an Israeli citizen. Over the years I’ve had the privilege to meet and work on a daily basis with American Christians who are so firmly attached to Israel and my people; who really care and willingly put their personal interests behind those of Israel and the Jewish people. They fight side by side with us in the trenches in the war against the demonization of Israel, as their love is unconditional, and their conviction is firm. Even if their actions go unrecognized. They purchase Israeli products, speak up on behalf of Israel and the Jewish people; they open their homes, their hearts, their LIVES, even at the cost of their own friendships. They suffer rejection and are ostracized by anti-Semitic groups for standing with Israel.

I stand in awe of their faithfulness to my homeland and my people, their resourcefulness in fundraising on behalf of causes connected to Israel. They work without ceasing and tirelessly, the same way they pray. They know our Bible, our biblical and national heroes, and are up to date with the news — nothing escapes their eyes nor their hearts. They breathe and live for the sake of Israel, living out in fullness their dedication to The TORAH and the G-d of the TORAH. I know I can trust them with my life! And I thank G-d for the Christians who actively love Israel.

We do have one common goal: to make sure that the Holocaust will never happen again! AM ISRAEL CHAI! The People of Israel live!

About the Author
Rachely (as in Rachel) Rachewsky Scapa was born in Curitiba, southern Brazil. She made alyiah on her own at the age of 16, living in a boarding school. Studied journalism in the Tel Aviv Open university. For over 20 years, Rachely hosts a Radio show titled Voice from Israel where she broadcasts news from Israel in Portuguese at Good News From Israel Radio. She also hosts a radio show in Hebrew about Brazilian music and culture at Radio Sol. Rachely is married to Alberto who made alyiah from Uruguay, and the mother of Yoel Lucas, who at the age if 9 also has his own radio show for children.
Related Topics
Related Posts
Comments