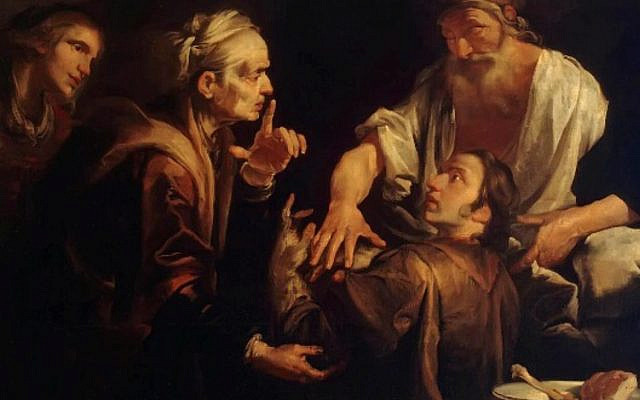 FROM THE POLITICAL TO THE BIBLICAL

Strong Women Can be Dangerous

It has been noted that this government will have far fewer women than the last Knesset and there will be far fewer female ministers. This is no surprise since many of the men demanding positions in the government do not have women in their parties. One wonders why these religious men avoid having women in their parties. Why do they demand separating women from men in public gatherings, as a possible condition of joining the government? Can it be related to their collective upbringings and their knowledge of women from their yeshiva book-learning? Are they threatened by women of initiative such as Rebekah and Bathsheba who are decisive and vocal? Do they remember how these strong women took advantage of the weaknesses of their menfolk? Surely if they studied last week’s haftarah, they know that Bathsheba and Nathan connived to deceive David into passing over the monarchy to Solomon (1 Kings 1). And if they read this week’s parsha they will learn how Rebekah connives to get Isaac to bless Jacob and take away the inheritance from Esau, thus literally, placing “a stumbling block before the blind” (Lev. 19:14).

When Isaac was old and his eyes were too dim to see, he called his older son Esau and said to him, “My son.” He answered, “Here I am.” And he said, “I am old now, and I do not know how soon I may die….Rebekah had been listening as Isaac spoke to his son Esau. When Esau had gone out into the open to hunt game to bring home, Rebekah said to her son Jacob, “I overheard your father speaking to your brother Esau…Now, my son, listen carefully as I instruct you…. Jacob answered his mother Rebekah, “But my brother Esau is a hairy man and I am smooth-skinned. If my father touches me, I shall appear to him as a trickster and bring upon myself a curse, not a blessing.” But his mother said to him, “Your curse, my son, be upon me! Just do as I say and go fetch them for me” (Genesis 27:1-13).

ELDER ABUSE: FROM THE BIBLICAL TO THE PERSONAL

Both these two biblical women (and their menfolk, Nathan and Jacob) were engaged in a form of elder abuse. They took advantage of their husbands’ frailties and old age to promote their own agenda. As an older woman, I am sensitive to this issue since I recently experienced a form of elder abuse. In fact, that is why this week’s blog is devoted to that subject. Elder abuse, which causes harm or distress to an older person, occurs when there is an expectation of trust. It includes harm by people, the older person knows, or has a relationship with, such as a spouse, partner, or family member; a friend or neighbor; or people that the older person relies on for services. It is a form of domestic violence, committed by family members and even paid help who can prey on the elderly.

A few weeks ago, I came home from swimming and saw a ladder leading up to our roof. Inside our kitchen, there was a strange man talking to my elderly husband. I asked what he was doing there and he said they were waiting for me to come home. Apparently, he had seen my husband coming home from the gym and told him that he was working on some of our neighbors’ roofs. My husband, trustingly, gave him a ladder and the man climbed up on the roof and took pictures and videos of the situation on the roof. He said we really had to do something about it urgently or else we would have terrible leaks. Without our permission, he looked around the house and on the back porch and said he could fix other things as well.  He gave me a price. Since I had done shiputzim a few years ago and had felt cheated at the time, I asked him to itemize everything. I told him I needed to think about it and consult my sons-in-law. Both of them felt the price was too much, but the worker stressed the urgency of doing the work before it was too late. He put pressure on me and despite my better judgement, I let him talk me into it and even gave him an advance.

View of our roof, permission by NG

WHAT ISAAC AND I HAD IN COMMON

Now comes the sad part. I sensed I might be overpaying, but did not realize by how much. Unbeknownst to me, while on the roof, he had approached my next-door neighbor (who shares the roof with us) to do similar work and gave her a price. Unlike, me, she called her contractor (who has been working on her house for a long time) and he came to check it out. He went up on our mutual roof, and after doing so, came into my house and casually asked how much I was paying the worker, who was still on the roof. When I told him and showed him the itemization, he was astounded and said it was highway robbery and that the worker was taking advantage of me because I am an old person. I was horrified!

I immediately identified with Isaac: here was Isaac who suspected something when he famously said: “the voice is the voice of Jacob, yet the hands are the hands of Esau” (Gen 27: 22). Against his better judgement he blessed Jacob. He only felt bad, when Esau walked in and he realized what he had done. Isaac’s reaction was:

“Who are you?” And he said, “I am your son, Esau, your first-born!” Isaac was seized with very violent trembling.…When Esau heard his father’s words, he burst into wild and bitter sobbing, and said to his father, “Bless me too, Father!” But he answered, “Your brother came with guile and took away your blessing.” [Esau asked] “Have you not reserved a blessing for me?” Isaac answered, saying to Esau, “But I have made him master over you…What, then, can I still do for you, my son?” And Esau said to his father, “Have you but one blessing, Father? Bless me too, Father!” And Esau wept aloud (Genesis 27: 30-38).

To me, our neighbor’s contractor was the messenger pointing out my mistake. While I did not tremble, I did not feel I could undo it. I accepted the situation as it was. I identified both with Isaac (the old man) and his son Esau (who was cheated). I felt like weeping and wailing.

Yet, I am not the typical old person who “can be taken in.” After all, I read AARP magazine which constantly warns its readers of telemarketing fraud. Just that same week, a WhatsApp circulated in our town, warning us how a man was pretending to be from the electric company, coming to check the meters, and then once in the house would steal items. AARP continuously warns us about being taken advantage of by our children. I’m very aware of the topic of elder abuse.

So why was my radar off? Why was Isaac’s radar off? As a blind person, he should have had an acute sense of smell, touch and sound? I think we elderly people are easily taken in, even victimized. Strangers, workmen off the street, scam artists and even our relatives want to take advantage of our age to “get something from us”—usually our property. This incident sickened me (as well as robbing me of hard-earned money). But, when I told my children what happened, l joked and told them it afforded me an opportunity to connect my personal victimization to the biblical.

Parshat Toledot’s main feature is about Isaac being old and blind, and putting his affairs in order and giving advanced directives for the future.  His infirmity is taken advantage of by his wife Rebekah and his younger son, Jacob, who had experience taking advantage of his brother’s hunger. Getting wind of Isaac’s plan to bless Esau, Jacob plays at identity theft. It is true that Isaac suspects something, for he says that “the voice is the voice of Jacob, yet the hands are the hands of Esau.” Jacob completes the identity theft by declaring unabashedly “I am Esau your first born.” One can argue that Isaac is setting himself up for deception, but that does not excuse Jacob or Rebekah. In my case, the workman, who I suspected was a Bedouin or an Arab, identified himself as Eyal, which is a Hebrew name. I only found out later, that this was not his name, when I wrote him a check with his legal name. Did he deliberately deceive me, so that I would think he was Jewish? Or was it that his name was too hard to pronounce?

With some insight as an elder, as well as a lot of hindsight, I now recognize that there is some timidity and a feeling of helplessness when faced with someone who might be brazenly cheating me. It is very unpleasant to stand up for your rights. Yet, I decided to say something. When I did, the worker verbally attacked the contractor, saying that HE was the cheat. I made it clear that I was unhappy with him and felt that he was taking advantage of me and I defended the contractor, whom I’ve known for years — he was my daughter’s classmate and we know his family well.

So was it just easier for Isaac to let the cheating go by him without saying more than “the hands are the hands of Esau and the voice is the voice of Jacob” because he was tired. Was he afraid of standing up? Was it convenient not to ask questions about Rebekah and possibly God’s choice of Jacob as the heir? We will never know, but what is clear is that both Jacob and Rebekah, like Bathsheba, took advantage of the infirmities of their elderly relatives. As for me, I am just out of pocket! But the voice of Esau’s weeping continues to haunt us.