He recently brought Jerry Seinfeld to Israel for four sold out nights of comedy at the Nokia Arena in Tel Aviv.

Here are Gad Oron’s thoughts on Seinfeld, why he enjoys his profession, and the future of international comedy in Israel.

Liberate Art: Congratulations on bringing Jerry Seinfeld to Israel for four sold out nights at the Nokia. What was he like to work with?

Oron: One word – Pleasure. Jerry Seinfeld surrounds himself with a top-rate professional team. They were cooperative, efficient, and effective. Mr. Seinfeld himself is nice and cooperative. I had a great experience promoting his shows in Israel. 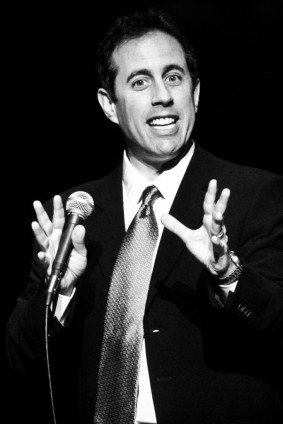 Liberate Art: Hundreds of international musicians perform in Israel every year, but comedy can be culturally specific. What topics did he touch on in his performance that you feel resonated most strongly with the Israeli audience?

Oron: Actually, his entire act resonated with the audience. Seinfeld broke the ice in the beginning by describing the typical audience member at his shows here. The rest of the show was easy after this.

Liberate Art: As one of the most successful concert promoters in Israel, you have been behind bringing so many big name talents to Israel. Is it just as exciting today as it was when you first started?

Oron: Every talent that we bring in is a new start, and it’s exciting. This is why I am still in this business. This was the first comedy show that I dealt with and it was a challenge, I must say. I didn’t know for sure that people would “goggle up” tickets the way they did because it was 100% in English.

Liberate Art: Israel hosts many international film and music festivals every year. What do you think about an international comedy festival?

Oron: We are working on this now. Keep it a secret.

From Artist Perspectives on Art, Israel and Freedom of Expression; a series of interviews by Lana Melman, CEO of Liberate Art Inc.

Gad Oron is the founder and director of Gad Oron Productions Ltd., one of Israel’s leading entertainment and live shows production companies. Oron envisions and produces extraordinary live experiences that remain unforgettable for years to come.