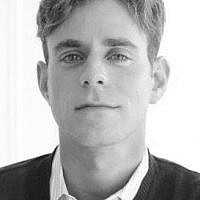 The Blogs
Mordechai Levovitz
Apply for a Blog
Advertisement
Please note that the posts on The Blogs are contributed by third parties. The opinions, facts and any media content in them are presented solely by the authors, and neither The Times of Israel nor its partners assume any responsibility for them. Please contact us in case of abuse. In case of abuse,
Report this post.

“Groundbreaking” Mental Health Conference on the Treatment of LGBT Jews in the Orthodox and Hasidic World to take place on Sunday April 19th at the Kraft Center, Columbia University, NYC.

New York, NY:​ In the wake of the White House’s public position calling for the end of “conversion therapy” for LGBT minors, ​leading Orthodox rabbis and psychoanalysts will, for the first time, come together for a collaborative conference on sexual orientation and gender identity in the Orthodox Jewish world. The goal of the event is to develop a psychoanalytically informed dialogue that is religiously sensitive but clinically responsible to the psychological needs of LGBT Jews in this community. The organizers believe that psychoanalytic theory offers a way to better understand the how LGBT Jews are perceived and treated within the Orthodox community. With a better understanding will come more care and less exclusion. The conference is co-sponsored by The William Alanson White Institute of Psychiatry, Psychoanalysis and Psychology, Lincoln Square Synagogue and JQY (A non profit dedicated to providing crisis and support resources for at-risk LGBT youth in the Orthodox & Hasidic community).

For the first time, mainstream Orthodox leaders from religious establishments like the RCA (Rabbinical Council Of America, the largest Orthodox Rabbinic group in America) will publicly engage with leading psychoanalysts and mental health experts in the field on issues like conversion therapy, coming out of the closet, and gay and transgender identities and rabbinic authority and responsibility. The Keynote speakers will be RCA Honorary President Rabbi Shmuel Goldin and RCA Executive Vice President Rabbi Mark Dratch and Lincoln Square Synagogue Rabbi Shaul Robinson. They will joined by Dr Jack Drescher, a psychiatrist and psychoanalyst and a member of the DSM-5 Subgroup on Sexual and Gender Identity; and psychoanalysts Dr Mark Blechner,Editor in Chief Emeritus of the journal, Contemporary Psychoanalysis. The co-chairs of the conference are Dr Alan Slomowitz, Dr Alison Feit and Mordechai Levovitz LMSW.

Sexuality and gender are complex and dynamic issues that may relate to identity formation, psychological well-being, cultural norms and religious affiliation. While Orthodox Jewish law proscribes a myriad of (hetero and homo) sexual behaviors, the psychological experience of being  gay, lesbian, bi, or transgender is not a matter that is simply or explicitly addressed in the tradition. In the Orthodox Jewish community, mental health professionals, educators, religious leaders, parents and youth counselors are often all on the front lines when it comes to engaging individuals experiencing conflict related to their sexual orientation or gender identity. Cultivating expertise, sharing best practices, promoting dialogue, and increasing communication on these issues are essential if our goal is to help this uniquely vulnerable population. This is the mission of this conference.

Counseling professionals are often the first formal responders to these LGBT youth in the Orthodox world. These counselors are most often Orthodox mental health professionals, rabbis, and educators affiliated with Orthodox schools, yeshivas, or camp programs. The voices of mental health professionals hold significant influence over Orthodox family, communal and organizational responses. The conference aims to be a resource for professionals willing to engage in this issue. The hope is that that this will be the first of ongoing opportunities for dialogue, trainings, case presentations, lectures, debates, and supervision opportunities.

Dr Drescher calls this conference “groundbreaking and an essential step in caring for a particularly vulnerable population.” Gay and Lesbian youth from highly rejecting families are more than 8 times as likely to have attempted suicide according to the Family Acceptance Project. Research has found that family and communal rejection of LGBT youth are significantly higher in the Orthodox Jewish community (Safran, 2012). “Something had to be done,” says Mordechai Levovitz, Conference Co-chair and Director of JQY, “in NYC studies show that 73% of Jewish Children are Orthodox; this means that in a couple of years the vast majority of LGBT Jewish youth in NYC will come from Orthodox homes and be at risk. We need to start educating Orthodox support resources now to respond to this impending need.”

Sean Herzfeld, a 15-year-old JQY member who recently came out in his Orthodox high school, points out that “It’s not enough to simply tell LGBT teens in religious communities that It Gets Better later, we have to work within the community to make it better now…and that’s what JQY and this conference do.”

Desire, Faith & Psychotherapy: ​A Mental Health Conference on Sexuality in the Orthodox Community, will take place on Sunday, April 19th at the Kraft Center, 606 West 115th st NYC A limited number of tickets are still available at: www.Universe.com/OrthodoxMentalHealth 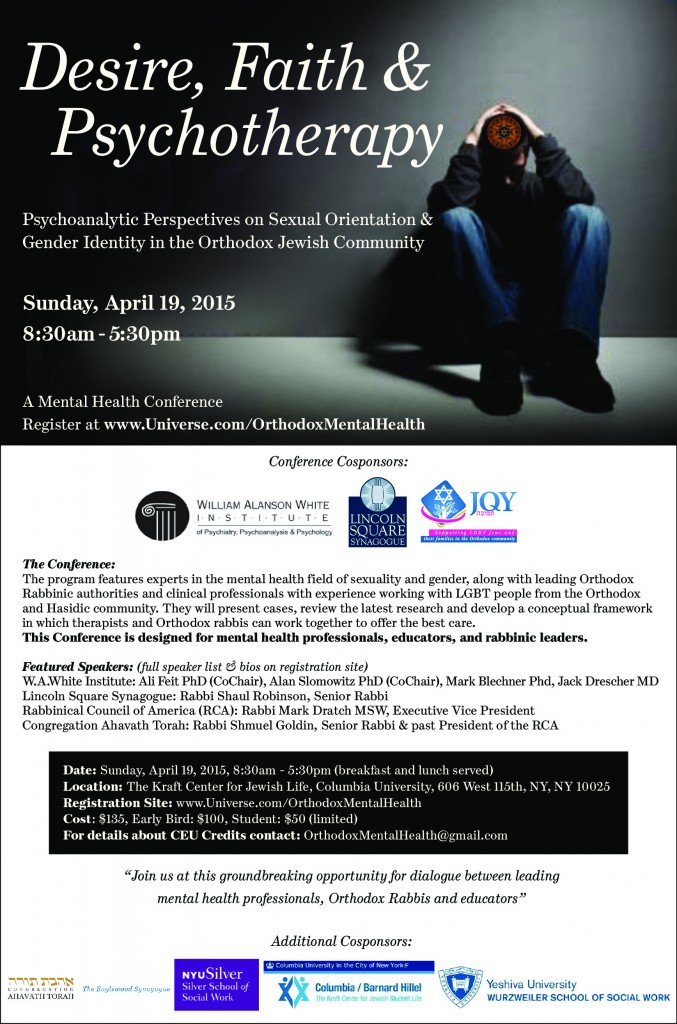 About the Author
Mordechai Levovitz is a social worker and Co-Executive Director of JQY (Jewish Queer Youth) a non-profit organization that creates support and crisis resources for LGBT Jewish Youth and their families in the Orthodox and Hassidic community.
Comments