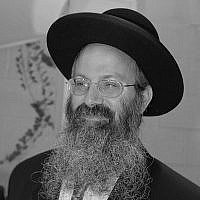 The Blogs
Eliezer Melamed
Apply for a Blog
Advertisement
Please note that the posts on The Blogs are contributed by third parties. The opinions, facts and any media content in them are presented solely by the authors, and neither The Times of Israel nor its partners assume any responsibility for them. Please contact us in case of abuse. In case of abuse,
Report this post.

At the time the government coalition was being formed, I received a number of questions from the haredi public and their supporters, concerning the issue of army recruitment, and the alliance of the ‘Bayit HaYehudi’(Jewish Home) party with ‘Yesh Atid’ (There is a Future) and why the rabbis did not condemn it. At the time, I avoided dealing with these issues seeing as all the rumors that were floated at the time were politically motivated, and it was difficult to know the facts.

Additionally, dealing with these topics, which directly affected the political process at the time, was something I did not want to be drawn into. Even prior to elections, I do not express support for any specific party – even my family is unaware of who I voted for. Political activity is indeed extremely important, and God bless all those involved in public affairs in a faithful manner, but in the framework of my duties, I am not required to engage in this demanding field. Furthermore, since many of the parties possess positive aspects, I prefer not to minimize my connection to one particular party.

Nevertheless, it seems that at the present, an attempt can be made to contend with the fundamental sides of these important issues, without the political context.

A Government without Haredim: At the time, I was asked: Why don’t you condemn the ‘Bayit HaYehudi’ party, which left the haredim out of the government?

Answer: Beyond what I have already written concerning distancing myself from engaging in partisan political issues, I will add another point: People often come to me, asking that I use my authority as a rabbi to influence one of my students to listen to them – and I refuse. Only when both sides are ready to listen, am I willing to get involved. I am not willing, however, to be manipulated in order to influence only one side. The same holds true for political issues – the haredi side sought to use the National Religious rabbis, without being prepared to hear their position on issues important to them, and in such a case, it is correct not to get involved.

What’s more, apparently the members of ‘Bayit HaYehudi’ were correct, claiming they originally sought to make an alliance with the haredim, but the haredim were not willing to commit not entering the government without them. Nor were they willing to coordinate positions on issues that are important to the National-Religious community. Afterwards, it became clear that Prime Minister Netanyahu had apparently asked the haredi representatives not to do so, and they heeded his request.

Why Didn’t You Cooperate to Defend the ‘Torah World’?

Others asked: Why don’t you stand up for the haredi yeshiva students, who are about to be forcibly recruited into the army?

It must be understood that the haredi public’s participation in the burden of security is essential to Israel’s survival. First of all, the State of Israel, surrounded by numerous enemies, cannot rely solely on a professional army – it must possess a ‘people’s army’ founded on recruitment, supplementing our standing soldiers and preparing a large reserve force. Secondly, a situation where almost an entire population of Jews does not enlist in the army creates a catastrophic national rift. It can clearly be seen how parties whose platforms explicitly called for the recruitment of haredim into the army, grew from one election to the next (‘Tzomet’ headed by Rafael ‘Raful’ Eitan, ‘Shinui’ headed by Tommy Lapid, ‘Yisrael Beiteinu’, and ‘Yesh Atid’).

Therefore, with all the admiration and deep connection I feel towards the haredi community, the situation is helpless. Perhaps the decisions can be delayed temporarily, but the national need along with public pressure is mounting, and they must be dealt with earnestly.

The Problem Could Have Been Solved in the Previous Government

In the series of articles, I suggested increasing the numbers of haredi youth enlisting in the army – at the very least, those who do not study Torah diligently. At the same time, I called attention to the secular nature of the army, which is the real obstacle facing the recruitment of haredi and religious into the army.

In all my articles, I emphasized the significant importance of support for Torah students, for it is a top national necessity and ideal, ensuring the future existence of Israel for generations. Therefore, along with increasing the recruitment of haredim who do not intend on becoming rabbis, the budget for those who study Torah diligently should be increased, such that the total budget invested in Torah study is not harmed.

I hoped that the representatives of the haredi community would understand the situation, and offer a program of increasing participation of haredi youth in the I. D.F., thereby correcting the Jewish character of the army, as well. In actuality, the opportunity to lead a gradual, positive process in the previous government was missed, and now, public pressure is mounting.

In any case, I was glad to read that the coalition agreement states that the budget for diligent Torah students will be increased threefold, exactly as I had written. It was also agreed that yeshiva students would not be forcibly recruited. Some haredi functionaries – for reasons only they know – preferred to spread rumors about the decrees of shmad (forced conversion) and coercion, instead of taking action to modify the atmosphere in the army for haredi youth.

And yet, I still hope that the leaders of the haredi community will join in the task of building animproved Jewish society in the State of Israel, and thereby increase Kiddush Hashem (sanctification of God) in the eyes of the nations.

Concerning the ‘Gedolim’ who Disgrace the Torah and Rabbis

Q: I read that a rabbi from the Eda Haredit (haredi community) said that the rabbis of the National-Religious community are “Reform” Jews and “up-rooters of Torah,” and another said they are ‘amei ha’aretz’ (ignorant). How should we relate to the haredi rabbis?

A: Concerning statements such as these, our Sages said: “With his own blemish he stigmatizes others as unfit” (Kiddushin 70a). And in this case, it is exactly right! After all, what is the person who said our rabbis are Reform, claiming? – That they invented new commandments, such as the mitzvah of yishuv ha’aretz (settling the Land), the mitzvah to protect the security of Israel, and the mitzvah to safeguard Israel’s unity. Now, if he doesn’t know that there are entire passages written about this in the Torah, and that there is an entire book concerning this matter – the Book of Joshua – then he himself “uproots” and deletes parts of the Torah, and he himself is Reform! Whoever claims that our rabbis are amei ha’aretz, is himself a complete am ha’aretz, believing he can twist all the verses and words of our Sages, according to his lack of understanding, and cancel the validity of commandments and laws.

And if he claims that involvement in the mitzvah of yishuv ha’aretz is liable to distance the youth from the Torah, this is exactly what the Reform claim, that strict observance of Shabbat distances Jews from keeping the tradition.

Furthermore, these individuals invent new prohibitions, thereby transgressing the prohibition of bal toseef (“You shall not add”). For example, the Torah did not prohibit studying the sciences and professions that people can make a respectful living from; nevertheless, they invented a new prohibition, according to which it is forbidden to learn sciences and professions, or at least not to teach it to the young. True, there are rabbis who believe initially it is better to teach children and teenagers only religious studies, and this is understandable. But anyone who claims that it is prohibited by the Torah, he himself transgresses the prohibition of bal toseef.

Practically speaking, these Torah up-rooters should not be considered talmidei chachamim (Torah scholars), and it is forbidden to honor them as rabbis – despite their misleading appearance. Unfortunately, “little foxes” in the form of mashgichim (supervisors), spokesmen, writers, and functionaries sanction their positions, creating a distorted impression in the haredi media. But as far as I understand, the vast majority of Torah scholars in the haredi community are not mistaken in this issue, and all our disputes with them are over the details, and it is a mitzvah to honor them as talmidei chachamim, to fear and love them.

About the Author
Rabbi Eliezer Melamed; The writer is Head of Yeshivat Har Bracha and a prolific author on Jewish Law, whose works include the series on Jewish law "Pininei Halacha" and a popular weekly column "Revivim" in the Besheva newspaper; His books "The Laws of Prayer" "The Laws of Passover" and "Nation, Land, Army" are presently being translated into English; Other articles by Rabbi Melamed can be viewed at: www.yhb.org.il/1
Comments