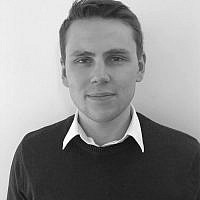 The Blogs
Elliot Keck
Apply for a Blog
Please note that the posts on The Blogs are contributed by third parties. The opinions, facts and any media content in them are presented solely by the authors, and neither The Times of Israel nor its partners assume any responsibility for them. Please contact us in case of abuse. In case of abuse,
Report this post. 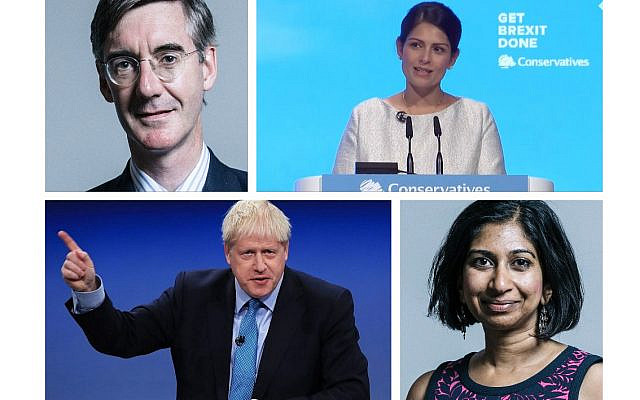 Jacob Rees-Mogg (top left), Priti Patel (top right) and Suella Braverman (bottom right) have all caused controversy with their use of language, but how will Boris Johnson respond to reassure the community? (Credit: Jewish News)

Over the past few years antisemitism has reared its ugly, malignant head once more, as the British Jewish community has been gaslighted, stereotyped, maligned, ignored and dismissed by the political party most British Jews once considered home, the Labour Party. Over the past 12 months, this toxic antisemitism has infused with the pervasive cancer of misogyny to force out two of the party’s most committed MPs – Luciana Berger and Dame Louise Ellman, both Jewish women.

Of course antisemitism never really went away. At most it went into hibernation, metamorphosing until conditions were ripe for its re-emergence. Some of the language has changed – the term “Zionist” now frequently preferred to “Jew” for its obfuscatory benefits.

But the tropes and the underlying hatred are largely the same.

But while the institutionally antisemitic nature of the Labour Party is now a given for all honest observers of British politics, a recent piece in the Jewish News by Nathan Boroda argued that it’s time “to talk about the Tories’ antisemitism problem.”

He raises a number of examples which he considers possible examples of antisemitism. There is Suella Braverman’s speech in March of this year about the threat of “cultural Marxism”, Home Secretary Priti Patel’s conference speech in which she took aim at a “North London, metropolitan, liberal elite” and Jacob Rees Mogg’s criticism of the Jewish philanthropist George Soros as “the remoaner funder in chief.”

One of the most disingenuous lines coming out of the Labour Party is the repeatedly made claim that antisemitic incidents emanate from less than 0.1% of the party’s membership but that, of course, “one antisemite is too many.”

This is not the issue – for as long as there are antisemites, racists, homophobes, sexists and so on present in society, they will be present in political parties.

It is in the procedures for dealing with these incidents that the Labour Party can be seen to be institutionally antisemitic – the way in which the leadership not only give succour to antisemites, but at times openly bolsters and amplifies their claims. It is this dismissiveness that has led to Labour being one of only two political parties in British history to be investigated for racism by the Equality and Human Rights Commission.

The Conservatives, I genuinely believe, do not have this problem.

Historically the party is by no means immune to the scourge of antisemitism – former Conservative Prime Minister Harold Macmillan once criticised Thatcher’s cabinet for including “more Old Estonians than it does Old Etonians.”

But the governments of both Cameron and May were proud supporters of the Jewish community, implementing a number of important policies, such as the ban on Hezbollah, the swift acceptance of the IHRA definition on antisemitism, and the development of a new Holocaust memorial.

The Conservative government has also fostered closer relations with Israel, an issue important to many in the community.

The Labour Party, meanwhile, drew inches closer to an explicit policy of boycotting Israel at its annual conference in September.

The Campaign Against Antisemitism researches incidents of antisemitism by elected officials. The Conservative Party has had four cases against it, two of which had “good outcomes.” Labour has also had two good outcomes, but out of a shocking 39 cases.

Suella Braverman was not intentionally engaging in an antisemitic trope – instead she was criticising the growth of identity politics, in which all issues are seen through the prism of oppressor and oppressed.

Priti Patel was referring not to British Jews, but to the Islington set of Corbyn, Thornberry and co. And George Soros is a major donor to the Remain cause.

But it is still shockingly lazy.

In the current atmosphere of political rhetoric towards the Jewish community, it is incumbent on all Conservatives – indeed politicians writ large – to be extra careful in their use of language. It is not enough to say “that’s not what I meant”. That’s the Corbyn line. Criticise identity politics, fine. But the term “cultural Marxism” is not necessary. Why say “North London metropolitan elite” when it is well known that North London is the home for most of Britain’s Jews? It should be easy to think of an epithet which mocks the insincerity of posh, highly-educated lefties talking about abolishing the very private schools which they or their children attended – the “Islington set” works fine. And Rees Mogg, a man famous for his careful use of the English language, did not need to place George Soros in his crosshairs.

The Conservative Party is rightly proud to be on the right side of this debate – on its attitudes towards Jews, and towards the State of Israel. But as Nathan Boroda uncomfortably points out, it is all too easy to become careless. At a time when the British Jewish community is in need of allies, this cannot continue.