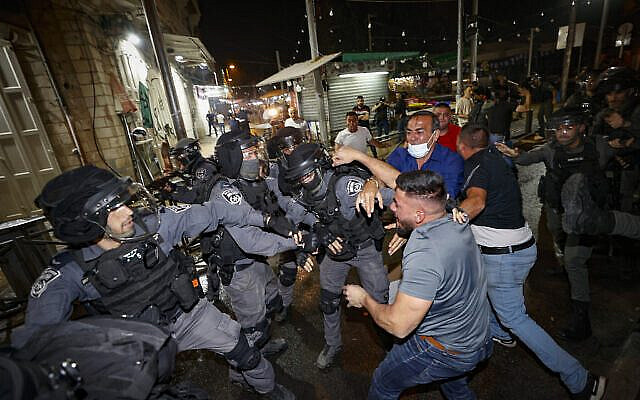 Today is a great day in Jewish history. 54 years ago today Israeli forces reconquered Jerusalem and after 19 years of Jerusalem being divided and Judenrein, the Jewish people’s capitol city was reunited under Jewish control. Designated “Yom Yerushalayim,” or Jerusalem Day ever since, the day has been one of celebration for Jews throughout the world.

The day has also been one fraught with controversy. Each year Jewish celebrants march through the old city of Jerusalem’s Muslim Quarter in the early hours of the morning, waving flags, yelling, chanting, singing and banging on the metal shutters of the Arab residents’ homes and stores. Much more than a celebration, the march is meant to demonstrate Jewish control of the city and to send a message that Arabs are mere temporary residents of the Jewish capital.

This year Yom Yerushalayim’s demonstration of Jewish control of the city is being made in more concrete terms than in past years. In a neighborhood of the city populated by Palestinian Arabs, Sheikh Jarrah, a legal dispute over ownership of several homes has stretched into violent protests and skirmishes between Arabs and Jews. Israeli police are caught in the middle trying to quell the violence. The violence has extended out of Sheikh Jarrah and moved to the Old City of Jerusalem where Arabs have been throwing boulders at police and Jews and police have cracked down on protesters. As with many outbreaks of violence in the old city, the end seems far away, and the city is bracing for the violence to get worse over the next week.

Stoking the flames of chaos are statements by the international community calling for Israel to demonstrate restraint, not evict Arab residents of Sheikh Jarrah, and believing the Arab narrative that they’re victims of Zionist colonialism. Facts seem to matter little when one sided pictures showing Israeli Defense Forces arresting Palestinians are blasted all over social media. It has long been easier to side with the weaker side in a conflict than delve into the details and context of any dispute.

The history of Jerusalem is anything but simple. It requires nuance and analysis to understand the complex layers of the history of this sacred city. Painting today’s violence without context of centuries of history that has led to today is superficial at best, and purposefully omits the complicated issues to further an agenda at worst. No one essay, post or tweet can explain today’s violence. To attempt to capture Jerusalem’s unrest in a screenshot is cheating one’s audience.

I’ve always found it ironic that the phrase Yom Yerushalayim in Tanach is found is Psalm 137 in a chapter that describes the exile of the Jewish people from the land of Israel. The Psalmist wrote, “If I forget you, Jerusalem, let my right hand wither; let my tongue stick to my palate if I cease to think of you, if I do not keep Jerusalem in memory even at my happiest hour. Remember, God, against the Edomites the day of Jerusalem; how they cried, ‘Strip her, strip her to her very foundations!’” The Tanach version of Jerusalem Day is a sad day, the 9th of Av.

Jerusalem is designed to be a city of peace. It is not only the Jewish people’s capitol, but the city where all nations of the world can gather together and pray to God. Yet today, we find ourselves far away from the mission of Jerusalem. The streets are chaotic, full of violence. Two of the world’s major religions are fighting on its streets. It is depressing that two peoples who love this city so much have decided to fight and kill over it instead of enjoying it together. It is difficult for me to celebrate Yom Yerushalayim this year. This Yom Yerushalyim seems more like the Yom Yerushalayim of Psalm 137 than of 1967. I pray that this violence will end quickly, and peace will be brought to our sacred city.