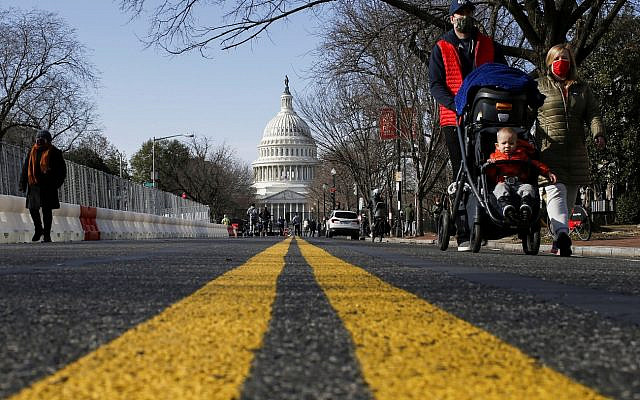 People try to see the Capitol as streets are blocked for security reasons ahead of U.S. President-elect Joe Biden's inauguration, in Washington, U.S., January 16, 2021. REUTERS/Eduardo Munoz

2021 will not be an easy year for America. It will not be an easy year anywhere or for anyone, but Americans are likely to feel the heat more than others. The conditions for a perfect storm have ripened; the combination of a plague that claims thousands of lives daily, a failing economy and uncertainty about the future of personal finance, searing hatred between Left and Right and Blacks and Whites, and loss of confidence in both the media and the authorities will force Americans to either stop everything and contemplate their future as a nation, or let the country accelerate its downward spiral to destruction.

Everyone already recognizes the severity of the situation; everyone is already talking about it, and I am really happy that they are. I hope that these scrutinies, however tough they may be, will help the country get a grip on itself and put some order in the chaos.

The two forces struggling in America, between Left and Right, are two approaches to life that exist all over the world. America possesses all the contradictions; it is a kind of modern Babylon. For this reason, if Americans can overcome their divisions and form some form of solidarity above their differences, which will certainly remain, then America will set an example that everyone will gladly follow.

Precisely because America, more than any other country, has enshrined self-centeredness, their reversal of this ideology will indicate to the rest of the world that it is indeed possible to restrain the ego. If they discover that they have no choice but to “dethrone” the ego since the egoistic system no longer works, and the economic and social systems they have built around it are falling apart, they will have the required motivation to unite above the spite and rancor that have surfaced mainly over the past year. It will not be pleasant, but a reckoning, a recognition of the illnesses within society is mandatory if they are to set off a healing process.

Empires, too, rise and fall. But when an empire such as the United States of America falls, it will pull down with it many other countries and people. Everyone will suffer from the death of such a massive system as the US, not just Americans, though they will suffer most of all.

So far, I have yet to see the forces or people who are bold enough, impartial enough, and publicly accepted enough to lead the process of America’s healing. However, as long as it is possible to reverse the trend, we must not lose hope. The times ahead will tell if we have merited the title “humans,” and rose above our egos to form a new union of society, or have succumbed to our egos and gave up the helm to the beast within us.