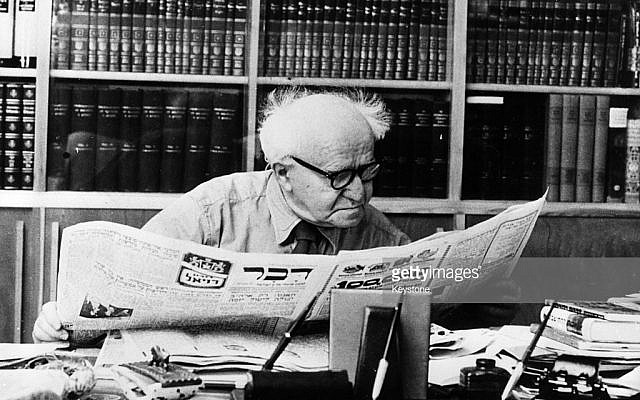 circa 1970: Israeli statesman and former prime minister of Israel David Ben-Gurion (1886 - 1973), who was committed to establishing a Jewish homeland in Palestine. (Photo by Keystone/Getty Images)

I woke up this morning and asked, “What have we become?” I secretly complain to myself.  Everyday there is something I witness or even worse become part of.  People are acting out, even nasty to each other. So I ask myself, are there instances where something worked? For instance, traffic circles.  Before they became the norm, people would get to intersections and either argue or run a light. Now everyone knows, whoever’s on the inside of the circle has the right of way. It works like a charm; tolerance and patience. So why can’t we re-engineer our society so that it is easier to live in, so that we are kinder and more giving to each other?  Being mean is not a sign of strength (duh) — its just the opposite.

So I get into a cab, and tell the driver Uri what I’m writing about.  He says, “Do you know Ma’ale Adumim“?  I say, “A little”.  He says, “Do you know there are hardly any accidents there?  “No, I didn’t know that!”…Do you know why?  …No….”There are NO traffic lights, only ‘kikarim’” (i.e., traffic circles).  I say to myself, “The system works.” We talk on, the morning traffic is ripe for it.  He continues: “I think we’ve lost kavod to one another. We’ve lost “nitinah” (giving). Do you really know any of the neighbors in your building?” “Not really, I reply.”  He reminisces: “I remember when I was little, that we did things all together! My saba (grandfather) would get people together every week.  We knew everyone.”  “Yeh,” I say, “today everyone’s in their own corner”.

So that same morning, I navigate Machon Rokach for another med test. There is a line, and people seem calm. However, the receptionist is a cross between Genghis Khan and a five-star general. She’s raising her voice to some sweet mother who barely speaks Hebrew; the mother clings to her baby and desperately tries to understand. People around, including me, are silent (I am ashamed to say!). The receptionist gets angrier, no smile, just frowns, and continues to bark like she is in army basic training.  Finally the woman scurries away, devastated on the inside, almost in tears. “Is this what we have become?”  I ask myself. Of course I don’t have the strength to say anything, like all the others. And the receptionist does not change her tune.

I get my appointment queue number. I can remember a time (not long ago) that there were no numbers and outside offices there would be violent arguments as to who was first! At least we have made progress. So I say to myself, “If we have made baby steps of progress, why not do it for real?” How could we make a sort of “blueprint” for a kinder gentler nation, one that would be flexible and grow, one that could be embraced by all, and one that would have “teeth,” that is the unwritten (or written) LAW.

Not too long ago the Avi Chai Foundation generously funded the movement for “piyus” (tolerance) in the press, public events, via posters, radio, television..a real blitz. And you know what? It worked, for a while. As long as the blitz was on, things were “cooking.” But then memories faded, and we were back to our public “shenanigans.”

So with your permission, I would like to take a stab at this. Given the simple examples of the traffic circles and blitz campaign for tolerance (cited above), what else could we possibly do? Here’s what I came up with:

1) Talk softly whenever possible. A public hush campaign. A collective singing of lullabies.

2) While driving, let people in. Give a little!

3) Respect our elderly; they are our collective wisdom; our homes for the aged are grossly understaffed; try to volunteer; most of all show kindness and respect to our elderly.

4) Every citizen should be required to do at least ONE year of sherut leumi (national service) — helping others.

5) Volunteering for high school students should be mandatory. No excuses.

6) Staggered morning work hours should be employed in cities, hence relieving the crazy-making morning traffic (which can ruin EVERYONE’s day).

7) Build more beautified public meeting places, like the “mesila” promenade in Jerusalem build out of a semi-slum area (thanks to the Gottesman Family Foundation); there people actually meet each other, strangers to strangers; there is a free book sharing library that was built (thanks to various public souls). Sound like “utopia”?

8) Establish initiatives to promote politeness and tolerance toward new Olim (immigrants) and foreign visitors. (NO they DON’T speak Hebrew!)

9) Institute a Public Clerks Course for learning common decent courtesy. This should include monitoring of all workers; if they cannot maintain a certain level of courtesy and “empathia,” then let them go to find other “pastures.”

10) Establish parenting courses, either highly recommended or required by all new parents.  (Now to some ears, this must sound absurd! But think of the damage parents can inflict on their their young and not-so-young children). What if every community center offered such courses? What if parents were PAID to take the course? What if they were required, and if they didn’t? (well I don’t want to go there right now).

11) As a possible outgrowth of #10, grant parent licenses for those who graduated the course. Maybe even license recipients could get discounts from participating baby goods stores.

12) Cut out our MEANNESS!  Let your brothers and sisters know this! (No, you are NOT in the army!)

13) Every Kupat Cholim should strive for more sympathetic secretaries, especially as people coming are hurting and/or are ill.

15) Limit the number of simultaneous Tama 38 renovation building projects in each neighborhood; monitor their frequency and intensity! In many cases, they are severely effecting the quality of our lives!

16) Avoid cutting down trees. They are our national treasure. If winter months necessitate trimming, do that at a minimum.

17) A BIG ONE.  Start to plan feasibility for a Guaranteed National Income. It can be done!

18) Give generous food stamps to the poor and needy. No one should go hungry!

19) Lower decibels for restaurant music; it should allow for intimate conversation; it is NOT meant to stimulate restaurant workers into a trance like mode of work, reminiscent of robots. On countless occasions, I have requested the waiter/waitress to please lower the volume, with one of the following replies: a) I don’t know how to do it; b) we can’t do it; c) our boss won’t allow us, it is company policy; d) OK, will do… but it is never done.

20) Give tickets for extra long horn beeps on the road…anger is dangerous! anger is contagious! (see recent blog by Rabbi Bill Berk).

22) Grant free poster installations in every city for advertising that encourages more tolerant human actions towards each other.

24) No false claims by the government re: safety of new public transportation and/or building projects. Case in point: One risks their lives to ride on the new Jerusalem-TA train, for MANY reasons (see recent TOI exposé by Raoul Wootliff).

25) Curb your dog! Poop everywhere is not romantic, especially in parks where I want to sit!

27) Institute a “smile tester,” as people enter a public place; at first this can be a humorous joke, but as it catches on, it could impart wisdom.

28) Find ways to have children spread their smiles (which come naturally!) to adults. This has actually been tried in a few nursing homes in the United States (and now in Israel), where kids in regular proximity to the elderly contribute to the quality of life (both of the kids and especially the elderly!).

29) Constantly monitor air quality on a neighborhood basis (not only city-wide).

Hopefully there is someone out there who is reading this.  And if not, I promise you, I will come back to “haunt” you with more ideas! Meanwhile please get to know your neighbors! And visit Ma’ale Adumim to see the traffic circles! And remember, we can be tough on the inside, but courteous and giving on the outside!

(P.S. New ideas most cordially accepted! Together, we can do it!)

About the Author
Stephen Horenstein is a composer, researcher and educator. His repertoire of musical works has been performed and recorded worldwide. He has been a recipient of the Israel Prime Minister's Prize for Composers and the National Endowment of the Arts (USA). His teaching has included Bennington College, Brandeis University, Tel Aviv University, Jerusalem Academy of Music and Dance; residencies at Stanford University, York University, California Institute of the Arts, and others. He is Founder and Director of the Jerusalem Institute of Contemporary Music, established in 1988 to bring the music of our time to a wider audience.
Related Topics
Related Posts
Stephen Horenstein
Comments