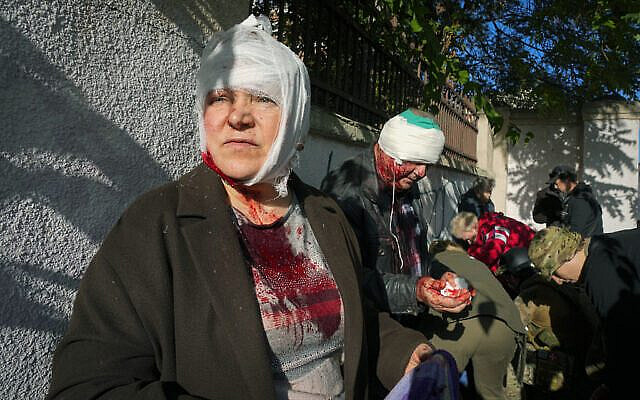 The killing machine of the Islamic Republic is active in several parts of the world these days. From Tehran, Sanandaj, Zahedan and other cities of Iran to Kyiv in Ukraine; Baghdad, Erbil; Sulaymaniyah, Sanaa and etc. 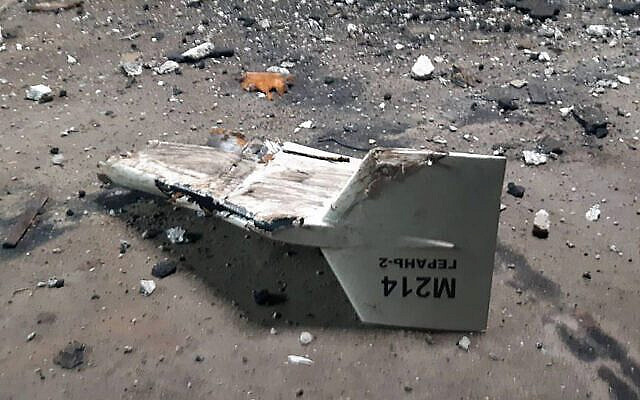 This undated photograph released by the Ukrainian military’s Strategic Communications Directorate shows the wreckage of what Kyiv has described as an Iranian Shahed drone downed near Kupiansk, Ukraine. Ukraine’s military claimed Tuesday, Sept. 13, 2022, for the first time that it encountered an Iranian-supplied suicide drone used by Russia on the battlefield, showing the deepening ties between Moscow and Tehran as the Islamic Republic’s tattered nuclear deal with world powers hangs in the balance. (Ukrainian military’s Strategic Communications Directorate via AP)

The strange thing is that despite the uprising of the Iranian people against the government of the mullahs and the involvement of the government with the people in this national crisis, the Iranian drones made by the Islamic Revolutionary Guard Corps are still active outside the borders of Iran, especially in the war between Ukraine and Russia. These drones have played a role in the killing of Ukrainian civilians in several stages.

Iranian Shahed drones that kyiv says Russia used as part of its massive and unprecedented attacks on urban infrastructure in Ukraine on Monday (October 10). It should be noted that more than twenty cities of Ukraine including: Kyiv, the capital, Lviv, Zhytomyr, Ternopil, Dnipro, Kremenchuk, Zaporizhzhya and Kharkiv were targeted, leaving at least 19 dead and more than 100 injured behind. In addition to cruise missiles, these attacks also used Shahed suicide drones. “As it seems, this is just the beginning and the Russian military is going to use more of these suicide drones in the coming days,” Persian Euronews reported. 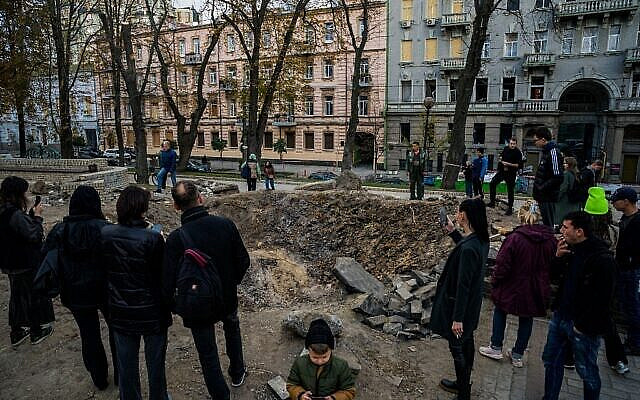 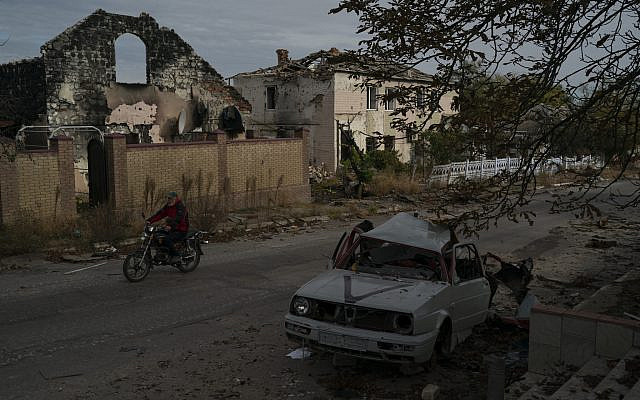 A man drives his motorcycle past a destroyed car in the retaken village of Velyka Oleksandrivka, Ukraine, Wednesday, Oct. 12, 2022. (AP Photo/Leo Correa)

Now the world has become aware of the fact that Islamic Republic has no limit in his madness in killing. The mullahs used to kill by equipping and arming their proxy groups in Iraq, Palestine and Yemen, but now they show a clearer face. They shoot Iranian citizens in the streets and massacre foreigners outside the borders with suicide drones.

Although verified technical reports acknowledge that the Shahed drones currently being used by Russia in Ukraine, do not have sophisticated and high-quality engineering, their use by the Russians in the Ukraine conflict has resulted in the massacre of civilians on several occasions. In general, it can be said that these drones somehow appeared as a weapon of mass destruction and played a major role in the killing of Ukrainian people.  This is an issue that the UN Security Council is still indifferent to.  As in the issue of their missile and drone attacks on Saudi Arabia, UAE, Kurdistan Region of Iraq and the equipping of Hezbollah and Islamic Jihad militants, it was silent and indifferent.

Satanic Islamic Republic at the peak of weakness?

The evil force of the Islamic Republic, despite all the noises and appearances, does not seem to be a very significant force. Military repressive forces, who are now busy killing and arresting ordinary citizens inside Iran, have become extremely tired during the 4 weeks of the crisis and have lost the ability to fight back. The same situation can be seen in the international arena regarding their inefficient military forces and equipment. The headquarters of the Ukrainian army announced earlier that 60% of the 86 Iranian-made “Shahed 136” drones were intercepted and destroyed in the recent attacks. Because these drones do not have a high speed and fly at a low altitude, and the only success of the Russians was their mass launching, which has led to massive killings.

This model of military strategy has also been seen in Hezbollah and Islamic Jihad rocket attacks on Israel. It means mass shooting, neutralization of nearly 80% of them in the sky, 10% hitting in the deserts and uninhabited areas and finally 10% hitting civilian areas and killing ordinary people, including women and children. 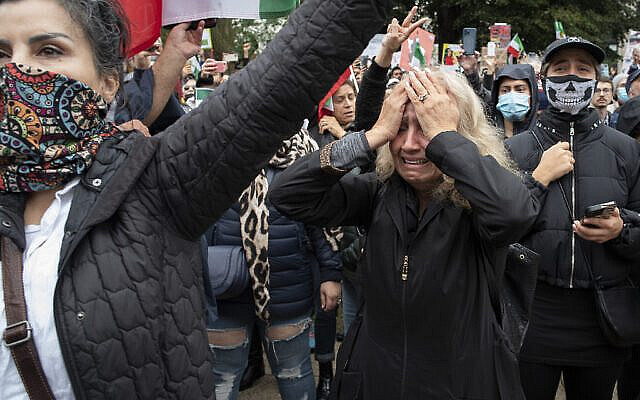 Nasi cries during a rally calling for regime change in Iran following the death of Mahsa Amini, a young woman who died after being arrested in Tehran by Iran’s notorious “morality police,” in Washington, Saturday, Oct. 1, 2022. Nasi’s daughter was killed Jan. 8, 2020, when the Islamic Revolutionary Guard Corps shot down a Ukraine International Airlines Flight 752 passenger airliner killing all 176 aboard. (AP Photo/Cliff Owen) 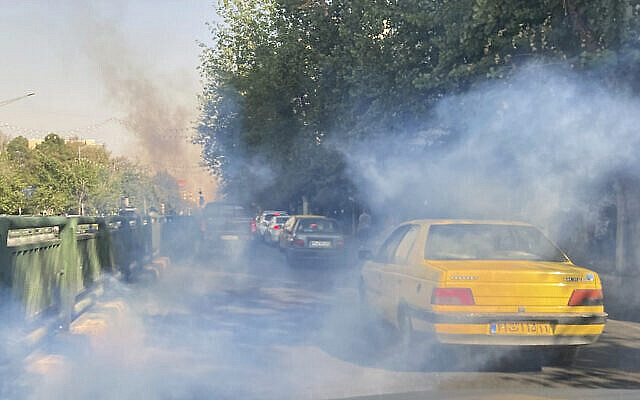 In this Saturday, Oct. 1, 2022, photo taken by an individual not employed by the Associated Press and obtained by the AP outside Iran, tear gas is fired by security to disperse protestors in front of the Tehran University, Iran. Thousands of Iranians have taken to the streets over the last two weeks to protest the death of Mahsa Amini, a 22-year-old woman who had been detained by the morality police in the capital of Tehran for allegedly wearing her mandatory Islamic veil too loosely. (AP Photo) 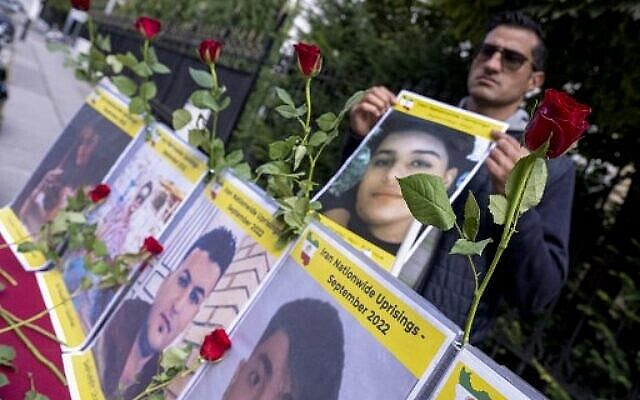 Sympathizers of the National Council of Resistance of Iran (NCRI) and of the People’s Mujahedin of Iran (MEK) take part in a demonstration in support of Iranian protesters near the Iranian Embassy in Vienna,Austria on September 26, 2022.

It seems that with the expansion of the scope of the crimes of the Islamic Republic regime inside and outside Iran, the need for action by the international community, not is more important than ever. The intervention of this regime in the killing of the defenseless people of Ukraine through the provision of lethal weapons is a kind of participation in war crimes and killing of protestors and ordinary citizens in the streets of Iran is a crime against humanity. These are apart from the interventions that this regime has had in Iraq, Yemen, Syria which led to the killing of women and children in these countries.