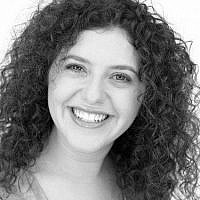 The Blogs
Ariela Rossberg
Apply for a Blog
Advertisement
Please note that the posts on The Blogs are contributed by third parties. The opinions, facts and any media content in them are presented solely by the authors, and neither The Times of Israel nor its partners assume any responsibility for them. Please contact us in case of abuse. In case of abuse,
Report this post.

Tradition. (Yes, I sang it as I typed it. I hope you read it that way, too.) Traditions are gifts, passed down like heirlooms through generations. They link us to our past, and shape our future.

When I arrived in Israel ten months ago, I brought two large suitcases and one backpack. I had decided to uproot my comfortable, yet unsatisfying life in New York and relocate to Israel. It didn’t take me long to figure out that among the whirlwind of new experiences, I needed some sense of familiarity. I decided to host my first Shabbat dinner.

I hopped on the light rail, and took my first trip to Mahane Yehuda. Note: shopping in the shuk on a Friday morning is not for the weak-hearted. I squeezed into the narrow alleyway, wormed my way through swarms of shouting Israelis, and began my quest. It was a sensory overload. The smell of freshly baked bread wafted through the alleys, mixed with an assortment of exotic spices, herbs, fresh fruit, and vegetables that still smelled of the earth. The colors were rich, and beautiful. Shop-keepers whistled and yelled, beckoning shoppers to their stalls, creating a beautiful cacophony of sounds and languages. I wandered, amazed at the scene before me, until I finally decided to give my Hebrew a try. “Kamah?” I asked, pointing to a bundle of mint leaves. “Shtayim.” I handed him two shekels, and with a grin, fell back into the crowd victoriously clutching my purchase.

A few hours later, I began the preparations for my first roast chicken. The smell of dinner floated into the hallway, lingered outside apartments, and slipped under doors. Music spilled into the halls, while laughter echoed through the building. The sun was setting over Jerusalem, and the entire city seemed to glow with the unique warmth that only comes on a Friday evening. I watched, as friends filled the small apartment. Shabbat had arrived. I looked around at the people who I’d come to know over those first three weeks, and as they lingered in the kitchen, I felt my heart fill with love. I lit the candles, we said the blessings, and cut the challah. As Rossberg Etiquette dictates, I tossed everyone a piece of the end slice. After my pitiful, yet admirable attempt to carve the chicken, we all sat down to eat.

I sat in awe, surrounded by love, as the sweet mountain air drifted through the open window. We were under Jerusalem’s spell. Her golden lights twinkled, as Ofra Haza’s voice soared from the speakers of someones laptop, reminding us how lucky we were to be celebrating Shabbat in Jerusalem of Gold. A dinner that was meant to be for six, turned into a feast for thirteen. I couldn’t help but feel a sense of pride as I watched my friends. Everyone looked so happy. The real world had been left at the door, and all that mattered was that we were together. We were laughing, singing, over-eating, and not leaving room for dessert. Which we ate anyway. As I took it in, I began to think about what brought me to that moment, and why I had decided to cook Shabbat dinner for my friends. Besides setting my inner Jewish Mama free, (eat, bubbeleh, you’re so skinny!) I realized that I had wanted to share a bit of home with my Jerusalem family. I wanted to make roast chicken, and toss end pieces of challah across the table. Shabbat dinner has always been a constant in my life, and as I sat around the table watching my friends, I knew it always would be. My mind began to wander, and suddenly I was racing my brother up the driveway of my Grandparent’s house.

You can smell the roast chicken from the street. Laughter spills through open windows, and my brother is standing at the door ringing the bell incessantly. Grandpa stands in the entrance, his blue eyes twinkling, even as he hollers at us to “quit that racket!” With a hearty laugh, a big grin, and a bear hug; he says “Hiya Maya!” Through my giggles, I manage to reply “Hiya Grandpaya!”

Once I got that hug, Shabbat had officially begun.

I run through the door, and up the stairs where everyone is gathered in the kitchen. The soup is simmering, the potatoes are browning, the vegetables are steaming, and the chicken is roasting. The sun is setting over Long Island, and the entire house seems to glow with the unique warmth that only comes on a Friday evening. The men mosey over to the bar, talking in whispers over glasses of scotch. I join the women, and together we light the candles, watching as the flame jumps from match to wick, dancing under the gentle breath of our prayers. I turn and catch a glimpse of the the men. My brothers stand beside them drinking soda out of plastic cups. I turn back, cover my eyes, say the blessing over the candles, and peek through my fingers. Before me, four generations of women stand side by side, deep in prayer. Their faces glow in the candlelight as they sway to the rhythm of their thoughts. One by one, their eyes are revealed to a choir of Shabbat wishes. Big hugs, smooshy kisses, and the unmistakable clinking of dishes tells us that it’s time to sit down. We gather around the table, shouting and teasing until Grandpa takes his place. He bellows “Quiet!”, in an attempt to silence the room, provoking us to make more noise, causing him to holler more, causing EVERYONE to make more noise. But once we’ve all settled, Grandpa, always at the head of the table, delivers the blessings with an enthusiasm that could never be matched.

Over dinner we eat, laugh, sing, tease, and tell stories. Someone eventually knocks over a glass of wine. As we eat, I catch a shared moment between my Grandparents. They exchange smiles from across the table, savoring the insanity of their loud, and loving family. I can sense their pride as they watch us. In that moment, I do not understand the gift they have given me. But I can see it. I can smell it. I can taste it, and I can feel it.

There are fifty-two Fridays in a year. At age 18, I had been a part of roughly 936 Friday night dinners, mostly held at my Grandparents house, which they bought as newlyweds. Their dining room table had witnessed the ups and downs of Rossberg-Family history. But through all of the joys, and all of the tragedies, Friday night dinners remained a tradition. We continued to gather, no matter the circumstances, always with my Grandpa leading the pack. Always with my Grandpa in the chair at the head of the table, reminding us that “it is what it is”, and although G-d works in mysterious ways, everything happens for a reason.

On June 2, 2006 the chair at the head of the table was empty for the first time. There was no bear hug. No “Hiya Maya!” No hollering, and no teasing. I prayed that night over the Shabbat candles with my Grandma, Mother, Aunt, and cousins. We held on to each other, swaying in unison to our private prayers. “It is what it is”, my Grandpa’s final message to us, echoed in our heads. When we finally sat down to dinner, we tried to avert our eyes from the emptiness before us, but we couldn’t avoid it. It cut through us, and there was a numbing silence as we prepared to say the traditional Friday night blessings. Who would say them tonight? I glanced at the empty chair. Growing up, that chair was a throne. No one but Grandpa could sit in it. That night it remained empty, a screaming reminder of who we just lost.

My brother stands, and raises his wine glass to begin the blessings. Struggling to get the words out, he puts it down. We all feel the weight of the past few days, and the eleven of us…eleven, no longer twelve, grasp each others hands. Together, we can get through this. I see my mother give my brothers hand an encouraging squeeze and he lifts his glass once more. “Baruch-atah-adonoi…” I squeeze my Grandma’s hand. “…elohainu melach ha’olam…” She squeezes back. “…borai…” I stare at the empty chair. “P’rei hagafan.” It stares back, it’s gaze burns as it brands itself into my heart. We all take a sip of wine. Nothing can be heard except the sounds of a family in mourning, until the silence is broken by a clap of thunder. It shouts so loud that it reaches our souls and twists our insides. It’s been raining since the night we buried him. Comforted by the hollering thunder, we begin our meal. It’s as if he’s there, telling us to quit moping and eat before the food gets cold. So, we do. And someone still manages to spill a glass of wine. We smile, and laugh. He is with us.

Every week, we continued to come together. My mother, determined to maintain our traditions began preparing, and hosting the weekly dinners. The empty chair was too much to bear. We pushed through the sadness, and soon found laughter. Shabbat held us together, and kept us strong. At some point, I stopped counting how many dinners had passed without him. Soon, I began to understand the gift my Grandparent’s had given us. I began to understand the moment that they shared, as they watched us in all of our insane glory. And I knew that when I eventually made my first Shabbat, I would carry the traditions I learned at my Grandparent’s table, and share them with my loved ones.

Eight years later, I reach across the table in an apartment in Jerusalem, and grab the end piece of challah. “Pardon my awkwardness, but it’s not Shabbat unless you all get an end piece.” I smile. Yes, it’s bizzare. But I wouldn’t want it any other way. The traditions have passed from my Grandparents table, to my mothers, to mine. I think my Grandpa would be proud.

About the Author
At eight years old, Ariela insisted on carrying a notebook wherever she went. Not much has changed. Before coming to Israel in August 2013, she spent a year touring elementary schools with her best-selling children's book, "The Gray Days". She runs workshops on accessing the creative spark for children and adults, and helps in the planning, promotion and execution of events for Jerusalism: A Social Literary Group. She is also a foreign correspondent writer for the travel site "Pink Pangea".
Comments