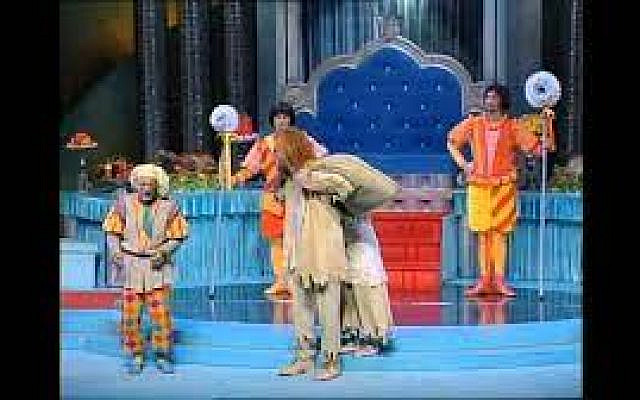 As Passover approaches the word ‘tradition’ assumes increasing prominence in the lives of Jews – and Israelis. Each ethnic group, and each family, has its own traditions regarding the way the festival is celebrated (cue musical interlude ‘Tradition’ from ‘Fiddler on the Roof’).

This was brought home to me with added intensity when the Israeli millionaire in space (he is not an astronaut), Eitan Steva, was interviewed on TV. When asked how he was going to celebrate the Seder in space he replied that gefillte fish is being provided for him. Gefillte fish? Where in the Bible is gefillte fish mentioned? Not at all, of course. In fact, in the orthodox German-Jewish (‘Yekke’) family of my birth no such dish was ever served at the Seder table. When I married into a family originating from eastern Europe it transpired that that particular dish was considered an essential, if not vital, part of the Seder meal. The centrality of that item was presumably connected with the nature of the food available to the residents of that region, but how and why it came to constitute a universal and basic necessity of the meal is beyond me.

Other traditions have become embedded in the life of Jews from different parts of the world, and this is particularly evident when it comes to rituals associated with religious observance and ritual. And so the (orthodox) Jewish world is divided into two groups: those (of Sephardic origin) who eat pulses on Passover and those (of Ashkenazi origin) who abjure all pulses on Passover. This rift goes back to rabbinic rulings in ancient times, and one might have thought it would be possible to find a solution for overcoming it. But so far no rabbi has dared to venture into this legalistic minefield. Thus, observant relatives of offspring who have married someone whose Passover meal tradition allows pulses will eschew those homes during the festival. I don’t know whether to laugh or cry when I hear about these traditions, but it strikes me as unnecessarily divisive in these modern times.

Another tradition – and thankfully one not associated with religious practice – struck me last week when I took my adult son and his six-year-old daughter to a performance of the Israeli musical ‘Utzli-Gutzli.’ The text of the play, which is based on the Grimm Brothers’ fable, ‘Rumpelstiltskin,’ was written some sixty years ago by Avraham Shlonsky, one of Israel’s leading literary figures, with music by Dubi Zeltser. Shlonsky’s grandiloquent rhyming couplets in not-always-accessible Hebrew might be considered too difficult for Israeli children, but the colourful set and costumes together with spirited acting and singing by the cast of the Cameri Theatre enabled the audience to grasp what was happening and to enjoy the pranks and jokes, as well as to participate in the singing when encouraged to do so by the actors,

There wasn’t an empty seat in the auditorium, which consisted of children of all ages, accompanied by parents and grandparents who doubtless themselves had seen the play in the past – when they, too, were children. I remember taking my daughter to it over forty years ago, when she was at the age my granddaughter is now. And although I was familiar with the general idea of the play, I wasn’t bored for a minute on seeing it again. The originality of the text, the virtuosity of the acting and the general joie-de-vivre of the production made the whole experience an enjoyable one (though my granddaughter was afraid when things didn’t seem to be going well for the poor baker’s daughter, who was required to spin straw into gold).

Another tradition, and one which, I hope, will not serve to create division among Jews in Israel.