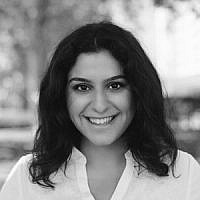 The Blogs
Miriam Eshaghian
Apply for a Blog
Advertisement
Please note that the posts on The Blogs are contributed by third parties. The opinions, facts and any media content in them are presented solely by the authors, and neither The Times of Israel nor its partners assume any responsibility for them. Please contact us in case of abuse. In case of abuse,
Report this post.

There have been numerous comparisons drawn between the tragedies of the Holocaust and the current conflict between Israel and Gaza. Whereas in Operation Protective Edge the lives of Israeli and Gazan civilians are at risk as a result of war, the Holocaust was a one-sided heinous effort to completely eliminate a people. No army in the world has taken more steps to prevent civilian casualties than the Israeli Defense Forces (IDF). Even with protective measures, innocents are unjustifiably killed and we are reminded of the tragedy of war. However, the Holocaust was not a war, it was a systematic persecution of innocent individuals. It was genocide.

Let’s go back 81 years to January 30, 1933–the date that Hitler was elected Chancellor of Germany. Less than two months later, the SS opened the first concentration camp, Dachau, in Munich. In September of 1935, the Nuremberg Laws brought about immediate and institutional segregation between Germany’s Jews and other Germans. On November 9, 1938, Kristallnacht marked the onset of a violent wave of anti-Semitic pogroms including murders and the destruction of Jewish-owned businesses; it represented a turning point in which many German citizens were no longer viewed as passive bystanders, but active perpetrators. For the next seven years, the Nazis carried out a mass genocide of Jews, homosexuals, Gypsies, Jehova’s Witnesses, the disabled, and resistors, subjecting them to inhumane labor, gas vans, firing squads, and extermination camps. In the extermination camps, faultless prisoners were used as human subjects in unethical “medical experiments,” and millions were murdered in gas chambers. Innocent lives were lost and individuals were dehumanized, overworked and starved until the point of death–all as a part of Hitler’s “Final Solution,” a plan to exterminate the Jewish people.

I ask the question, why? Why would anyone kill 11 million humans? The answer? Some because they were homosexual, disabled, or had the moral values to stand up against hate. The majority because they were born Jewish. And all because of their identities. 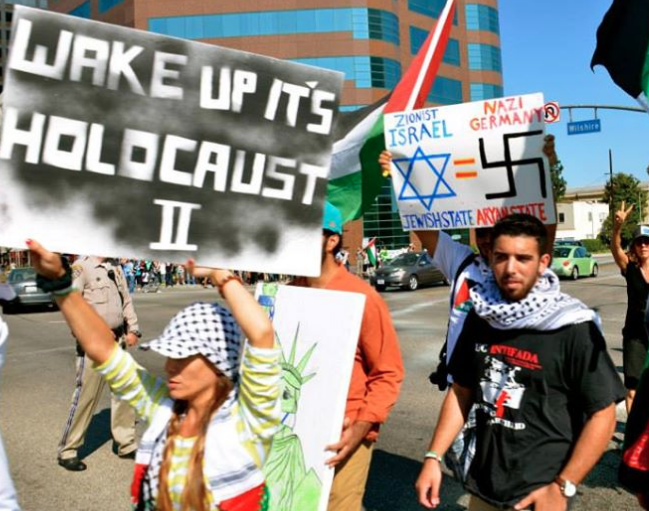 Pro-Palestinian Protestors at Gaza Protest in Los Angeles on July 20, 2014

Let’s now focus on Operation Protective Edge. Following the abduction and murder of three innocent Israeli teenagers by Hamas terrorists and the murder of an innocent Palestinian boy by an extremist Israeli, Hamas indiscriminately launched a series of thousands of rockets targeting Israeli civilians. To protect its civilians, the IDF uses intelligence and precision to target the terrorists launching rockets. Unfortunately, as is the case of all wars, innocent civilians have been killed–both Israeli and Palestinian. The loss of any life is heart wrenching.

I ask the question, why? Why are innocent civilians dying? The answer? Both people are suffering due to Hamas and its disregard of human life. Hamas is a terrorist organization calling for another genocide, the annihilation of the Jewish people. This mission is a frightful, recurrent theme throughout Jewish History. While Israelis have invested in protecting their civilians by creating bomb shelters and the Iron Dome technology, Hamas leadership focuses their efforts on encouraging violent martyrdom. Moreover, Hamas knowingly risks the lives of their constituents by launching rockets from densely populated areas including schools and hospitals.

The ongoing effort to trivialize the Holocaust in order to inappropriately incite the emotions of the other is disgraceful. Slanderous claims that the IDF is “worse than the Nazis” or “one Holocaust doesn’t justify another” are ignominious. War is tragic, but disaster and grief is no excuse for ignorance and disrespect. Making a comparison between the Holocaust and Operation Protective Edge is categorically abominable. It contributes to the despicable escalation of Holocaust distortion currently perpetuated by Holocaust deniers including President of the Palestinian Authority Mahmoud Abbas, whose PhD thesis was titled, “The Other Side: The Secret Relationship between Nazism and Zionism.” You don’t have to be Jewish to respect the lives tyrannized and lost during the Holocaust, you just have to be human. Denying and distorting other peoples’ history of oppression will not bring peace. Although many using these analogies may recognize the atrocities of the Holocaust, they neither respect the lives lost nor exhibit the care to understand the everlasting scar on the Jewish community. Rather than using our right to freedom of speech as a medium to harass a people or disparage a historical catastrophe, we should seek avenues through which we can institute change. Our civil liberties provide us with the opportunity to become educated and informed. Don’t use emotionally charged words and phrases to gain a following. Be accurate, use facts, and create your own analysis of the conflict. Most importantly, be respectful and sensitive to all people’s histories. It is solely through mutual respect and understanding of different backgrounds that our generation will evolve and take a step closer to resolving any issues.

About the Author
Miriam Eshaghian is a graduate student at USC School of Pharmacy and has a BS degree from UCLA.
Related Topics
Related Posts
Comments