Walking the streets of Jerusalem the week before Passover, I pass dumpsters with unopened bags of flour, crackers, bread, cakes, and other leavened products. This is edible food that is being destroyed to observe Passover, but which could be given to non-Jews or eaten before Passover with greater foresight. What is a reasonable amount of chametz (leavened bread) to destroy before Passover? How can we plan for getting rid of chametz in order to minimize the amount of edible food that we throw away or burn? What is the most enlightened way that both destroys chametz and doesn’t excessively waste good food?

Judaism places a strong value on not wasting anything of value to people, especially edible food. This derives from the commandment in Deuteronomy 20:19 not to cut down fruit trees in war. The rabbis understand from this a commandment not to destroy edible food. Therefore it is surprising to see so much food waste in Jerusalem– especially before Passover.

The Talmudic sage Rabbi Yishmael understood that if the Torah warns us not to destroy fruit trees, then we should be even more careful about not destroying the fruit itself. Based on this, the consensus view of rabbinic authorities agree is that the Torah forbids destroying edible food. This applies to all food that is fit to be eaten, and not only the fruit of trees. So how could it be that hundreds of thousands of pounds of edible food are thrown out or burned, because they are leavened products (chametz)? 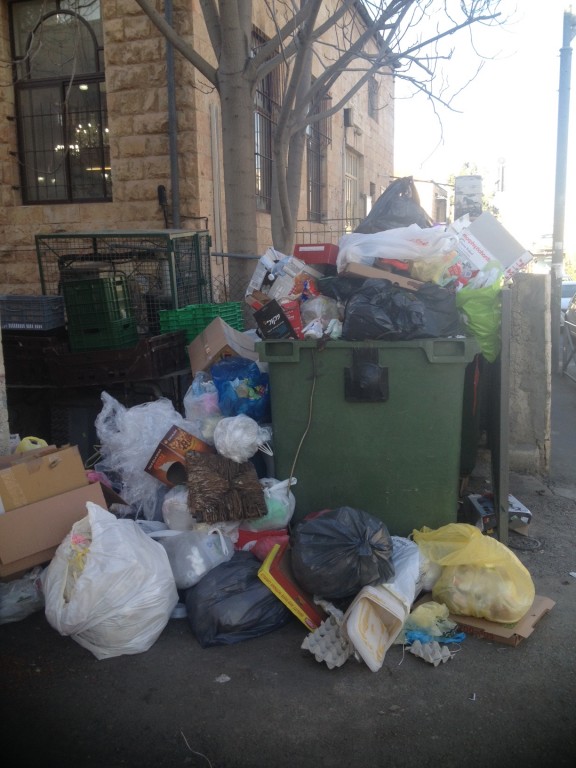 (The Interfaith Center for Sustainable Development)

On the one hand, the Torah calls for getting rid of chametz. This is clear. But how we do it is another question. We live in a society that wastes about one-third of its edible food. One third. This is not how our grandparents or great-grandparents grew up. In previous generations, especially when Jews were living more simply and with less abundant food, they would get rid of their chametz, but it is highly unlikely that families would throw tens of pounds of good food in the garbage, or the fire. This is something unique to our highly abundant and highly wasteful society. Tremendous amounts of fossil fuels are burned, and water is used, to produce, transport, and dispose of this food. Chemical fertilizers and pesticides are produced and applied to crops, with significant ecological impacts. And all for this food to never be eaten, but to go into the garbage. It seems clear to me that a person that destroys a large amount of chametz, instead of engaging in planning on how to consume it a month ago or how to give it to a non-Jew, transgresses the commandment of ‘do not destroy’ while fulfilling the commandment of destroying their chametz.

The Jewish Sages reveal a high degree of concern and sensitivity when it comes to being wasteful. According to the Sefer Ha-Hinukh (R’ Aharon of Barcelona, 13th century), righteous Jews “do not allow the loss of even a grain of mustard, being distressed at the sight of any loss or destruction. If they can help it, they prevent any destruction with all the means at their disposal.” This is quite a level to which to aspire. And it indicates that part of Jewish spirituality involves being attuned to not wasting.

Let me conclude with the words of Rabbi Sampson Rafael Hirsch (1808-1888, Germany), whose insights about the spiritual roots of wasting are more relevant than ever. He explains in very strong language that “lo tashchit,” the commandment not to destroy, is “the most comprehensive warning to human beings not to misuse the position which God has given them as masters of the world and its matter through capricious, passionate, or merely thoughtless wasteful destruction of anything on earth… If you should regard the beings beneath you as objects without rights, not perceiving God Who created them, and therefore desire that they feel the might of your presumptuous mood, instead of using them only as the means of wise human activity — then God’s call proclaims to you, ‘Do not destroy anything!’ Be a mensch [a righteous person]! Only if you use the things around you for wise human purposes, sanctified by the word of My teaching, only then are you a mensch and have the right over them which I have given you as a human…However, if you destroy, if you ruin, at that moment you are not a human…and have no right to the things around you. I lent them to you for wise use only; never forget that I lent them to you. As soon as you use them unwisely, be it the greatest or the smallest, you commit treachery against my world, you commit murder and robbery against my property, you sin against Me!… In truth, there is no one nearer to idolatry than one who can disregard the fact that all things are the creatures and property of God, and who then presumes to have the right, because he has the might, to destroy them according to a presumptuous act of will. Yes, that one is already serving the most powerful idols — anger, pride, and above all ego, which in its passion regards itself as the master of things.”

My hope and prayer this Passover is that we can raise up the spiritual sparks in Creation through our holy use of everything that comes into our possession.