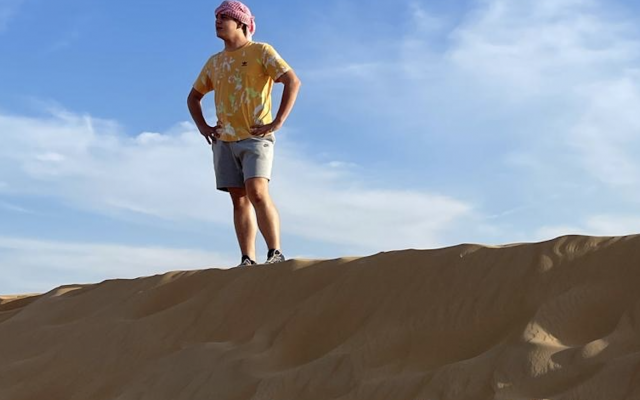 In the Dubai Desert in December 2021. (Luiz Gandelman)

For winter break of 2021, I got the chance to visit Dubai, in the United Arab Emirates. I am an Israeli citizen, meaning that until 2020, I was not allowed to even enter the UAE, making a vacation to Dubai virtually impossible. This changed thanks to the Abraham Accords, when Bahrain, Israel, and The United Arab Emirates signed a peace treaty and established normalization. 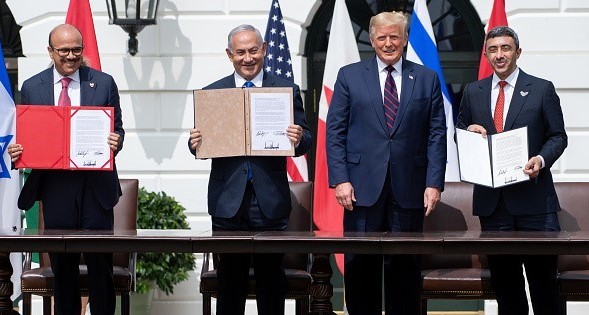 (L-R)Bahrain Foreign Minister Abdullatif al-Zayani, Israeli Prime Minister Benjamin Netanyahu, Former US President Donald Trump, and UAE Foreign Minister Abdullah bin Zayed Al-Nahyan hold up documents after participating in the signing of the Abraham Accords where the countries of Bahrain and the United Arab Emirates recognize Israel, at the White House in Washington, DC, September 15, 2020. – Israeli Prime Minister Benjamin Netanyahu and the foreign ministers of Bahrain and the United Arab Emirates arrived September 15, 2020 at the White House to sign historic accords normalizing ties between the Jewish and Arab states. (Photo by SAUL LOEB/AFP via Getty Images)

My family decided to take a trip to Dubai. We embarked on a Lufthansa airlines flight to Dubai, connecting in Frankfurt. Upon landing in Dubai, I was amazed. Save for Arab neighborhoods in Israel, I had never been to a place where Arabic was the primary language. As I walked through the airport, I stared in awe at the grandiose beauty of DBX (Dubai International’s Airport). Border control was rather smooth, and to our delightful surprise, we encountered absolutely no issues at the airport.

Driving through the city was surreal. The city is incredibly beautiful, and I was delighted to find countless restaurants and stores from all around the world. The entirety of the city was tremendously beautiful. From the towering Burj Khalifa (The world’s tallest building), to the beautiful sand dunes of the Emirati desert. The beauty of Dubai is near unparalleled. 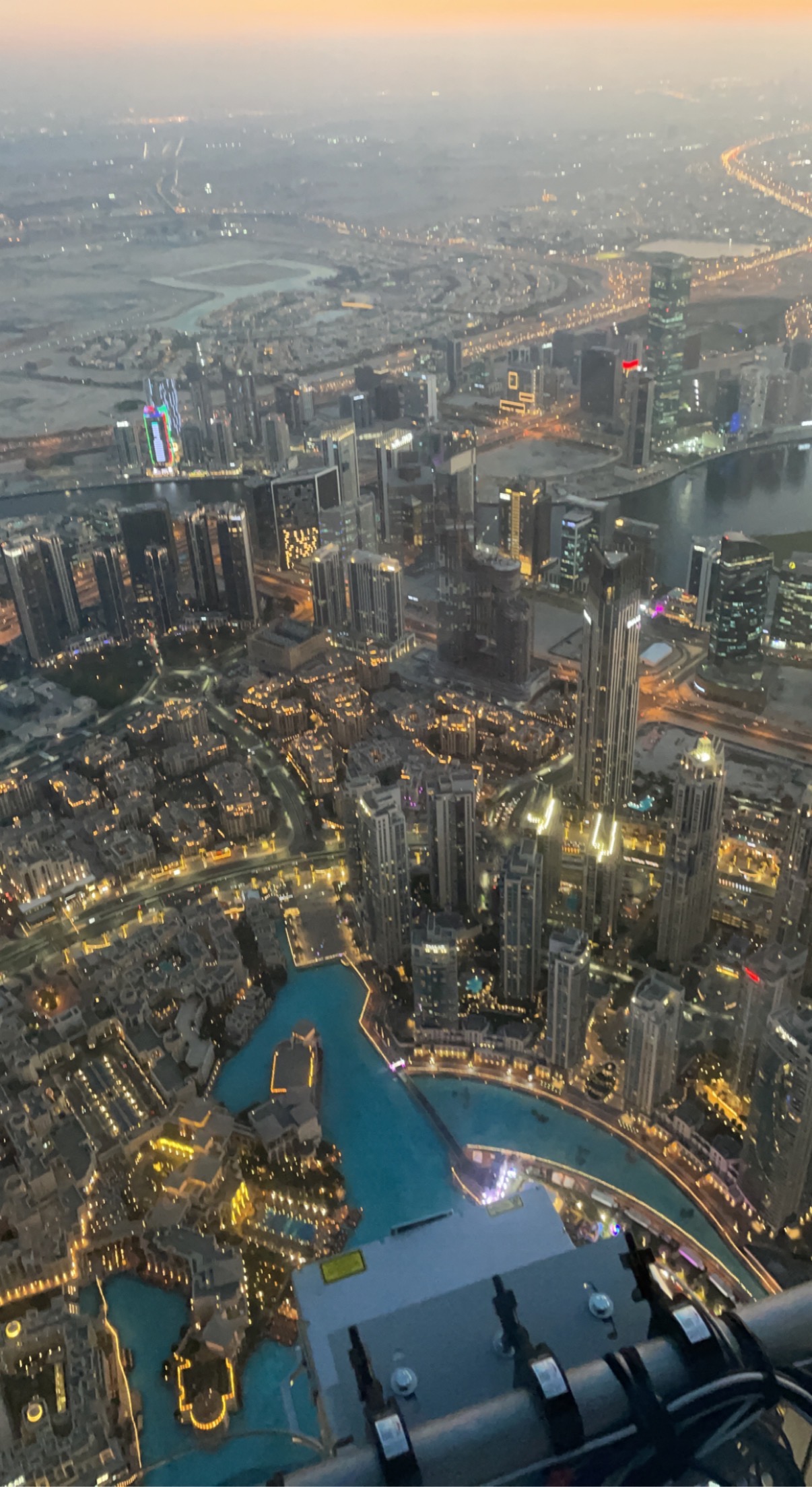 The view of the center of Dubai from the viewing area near the top of the Burj Khalifa in December 2021. (Luiz Gandelman)

I also got the chance to visit the Expo 2020 Dubai, where I was able to visit 133 different countries’ pavilions out of 191 that there were. From sustainability in Norway to Innovation in America, it was truly an incredible experience to be able to visit pavilions of different countries and learn about them. Perhaps the most interesting experience, however, was visiting the Palestine Pavilion. While several pavilions were simple showcases of their countries, some had propaganda-like aspects to them. Palestine was a mix of both. The pavilion was one of the bigger ones and quite frankly had a beautiful building. I went inside, an Israeli with an open mind and a willingness to learn. To one extent, it was awesome to learn about Palestinian culture, and the pavilion itself was not disappointing, as it was very interactive and interesting. The only issue was the propaganda-esque elements of the pavilion, like claims that Masada and Haifa, as well as other parts of Israel (Not the Occupied territories, plain out Israel) are part of Palestine. Even worse was an interactive display which showed the entire map of Israel and Palestine and called it all Palestine. Despite this provocative propaganda, the pavilion itself was actually enjoyable. I enjoyed eating at a Palestinian restaurant at the expo called Mama’Esh, where I got to experience Palestinian flavors and learn more about the culture. 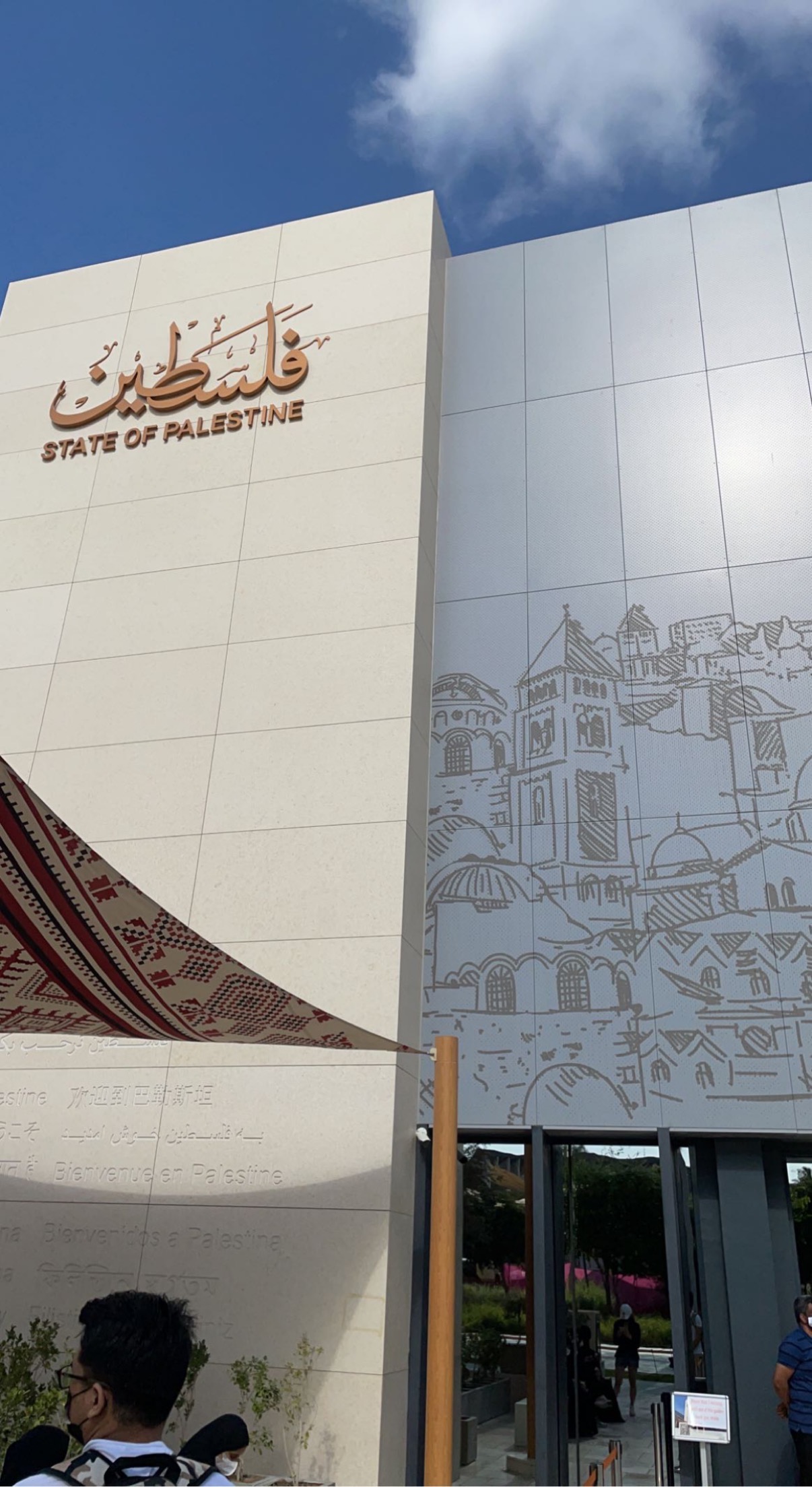 Many of the pavilions, from Pakistan to Thailand, to America and the UAE were incredible, but I could not help but go to the Israeli pavilion, considering I am Israeli myself. I was amazed. The pavilion was nothing short of beautiful, and was in my opinion, a fantastic representation of Israel. The pavilion emphasized Israeli developments in technology and culture, and showcased Israeli people and the Israeli feeling of community. The best part, however, was seeing countless people waiting in line, both Emiratis and Tourists alike, and countless people watching and admiring the pavilion. I loved seeing people from all different cultures, especially Emiratis, learning about Israel. 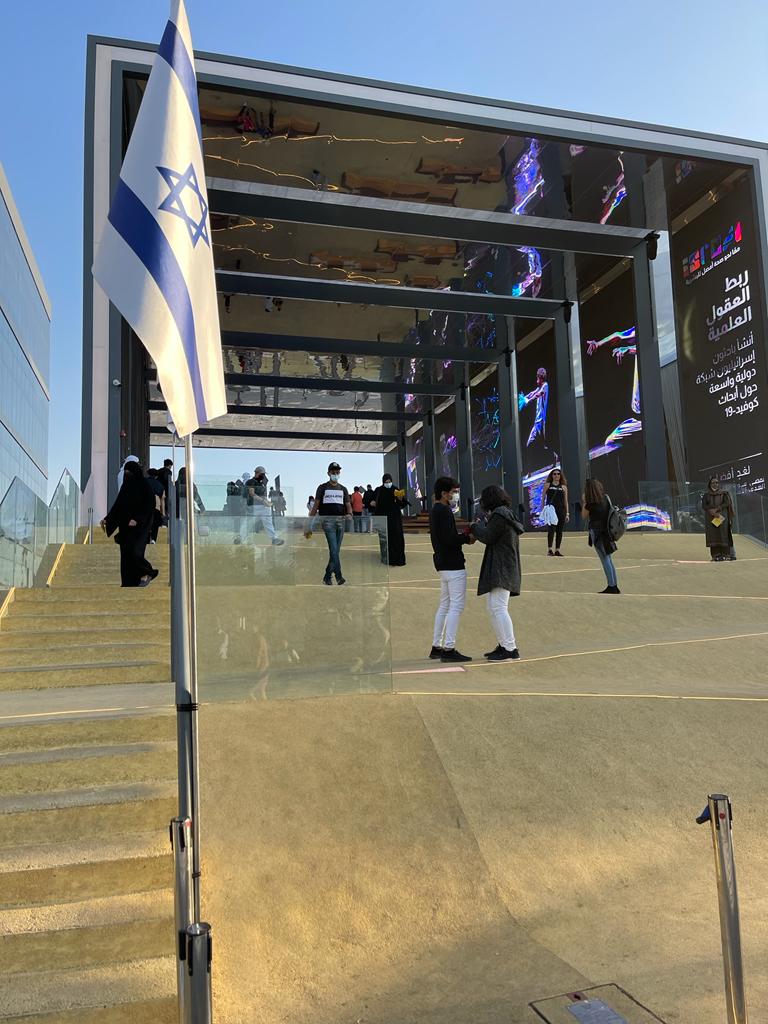 the Israeli pavilion at Expo 2020 Dubai as seen from outside in December 2021. (Luiz Gandelman)

Emirati hospitality is really close to unparalleled, and it was incredible to think that just a few years ago Dubai was a place I wasn’t allowed to go to. I saw Israelis everywhere we went. We saw several tour groups of Israelis at the Sheikh Zayed Grand Mosque in Abu Dhabi. Me and my mom would point out every time we heard Hebrew to each other. We heard Hebrew nothing short of everywhere. In restaurants, our hotel, on the street, tourist attractions, and everything in between. Dubai is a popular tourist destination for Israelis, and we were welcomed by Emiratis. Merchants in the Souk would say “Shalom” and “Chaverim” to passerby Israelis, which I found rather funny. Several Israelis we spoke to told us they were having a great time and seemed to enjoy Dubai. There was one common theme, however. Food.

Food is something I firmly believe everyone can unite over. Dubai is where I’ve had some of the best food I have ever eaten. When one thinks of Dubai food, the first thing that comes to mind is usually High-end restaurants. While high-end restaurants and international cuisine is a prominent part of the Emirati food scene, what stood out to me was Emirati cuisine itself. Growing up in an Israeli household, the flavors of the Middle East were always familiar to me. From Labneh to Hummus, and Shakshouka and Kibbeh, Middle Eastern cuisine is among my favorite. I was delighted to find a lot of these flavors in Dubai, along with local Emirati delicacies, like camel meat and Lugaimat. While these flavors were new to me, I throughly enjoyed eating them and learning about their ties to Emirati culture and history. Israeli cuisine is so similar to Emirati, and I’ve found that most Middle Eastern nations share many things, from a geographical location, to scorching heat. Food is also shared. While every ethnic group and nation in the Middle East has a wildly different culture, food is usually similar, and that is something I believe we can all bond over. 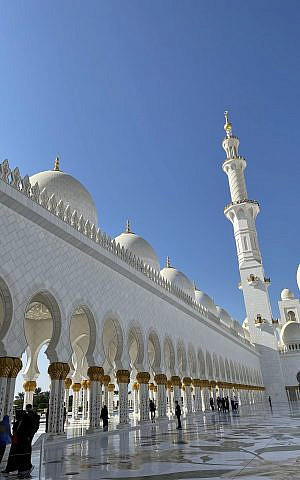 Sheikh Zayed Grand Mosque in Abu Dhabi, United Arab Emirates in December 2021. The Mosque is a popular destination for millions of visitors to Abu Dhabi due to its sheer grandiose and beauty. (Luiz Gandelman)

Another unique experience from my time in Dubai is the fact that I am an observant Jew. I pray 3 times a day, once when I wake up, once after lunch, and once before I go to sleep (Shacharit, Mincha, Maariv). I usually prayed Shacharit and Maariv in my hotel room, but I normally had to pray Mincha in public places. Places I’ve prayed include the Dubai Mall, The World Expo, and The Dubai Souk, among others. I was usually the Jew present in most of those situations to my knowledge, and for a fact the only Jew wearing a Kippah and praying Mincha. I usually never even got any sort of reaction, but there was the usual stare or glance. Overall, Emiratis were incredibly welcoming to me not just as a Jew, but as an Israeli. I felt very safe and welcomed throughout my entire experience there.

One experience stood out, however. It was December 31,2021 (New Year’s Eve). It also happened to have coincided with Shabbat. Our flight to Frankfurt left late at night, but road closures forced us to have to leave the hotel early, leading to us spending hours sitting down in an airport terminal. Right before the sun set I decided to pray Kabbalat Shabbat. I went to a smaller and secluded spot in the airport, my dad watching from the distance, and began praying. A man began to approach me and yell in Arabic. Before anything major happened, one Dubai Airport police officer and one airport staff member held the man back and restrained him. He continued yelling and motioning towards me as I kept praying. When I finally finished, we made eye contact and he stared me down as I walked away. Shocked, I walked away with my dad, who told me what he saw from where he was standing. As we did a rushed Kiddush over a grape soda, I began thinking. As disappointing that it was that I faced such antisemitism, my experiences otherwise in Dubai proved Dubai to be a safe and enjoyable place, and all this experience did was strengthen my identity as a Jew and make me even prouder to be Jewish.

Overall my experience as an Israeli Jew in Dubai was overwhelmingly positive, and just Dubai in itself was incredible. The situation with the UAE and Israel shows that peace between the Arab World and Israel is not only possible, but real. I look forward to more countries normalizing ties with Israel and allowing for this beautiful sharing of cultures that the UAE and Israel are currently partaking in.

About the Author
Luiz Gandelman is a 16 year old student originally from São Paulo, Brazil, who lives in Miami, Florida. He is currently taking part in Tichon Ramah Yerushalayim. He is involved with multiple Jewish and secular youth groups and political organizations. Luiz is a big basketball and Star Wars fan and an avid scuba diver. He is also a fan of geography, politics, history, and anything of the sort. Most importantly, he is a proud Jew.
Comments