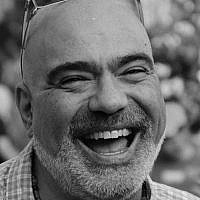 The Blogs
Avi Rose
Apply for a Blog
Please note that the posts on The Blogs are contributed by third parties. The opinions, facts and any media content in them are presented solely by the authors, and neither The Times of Israel nor its partners assume any responsibility for them. Please contact us in case of abuse. In case of abuse,
Report this post.

Lockdown has locked out many of us out of culture. Whether you live in Israel or elsewhere, the sights, sounds and scents of life in the Holy Land may seem very far away. Summer in Israel is meant to be a time when tourists and locals are out sampling the best of the visual arts, music, performances and film, all done with a handful of fresh deliciousness to snack on. Instead, we are glued to the news or struggling with the work/life (im)balance, doing our best to stay one step ahead of this pandemic and its knock-off effects.

As a remedy for all this distance and distress, I present TREYSAR, a series of blog posts that offer up a healthy dose of Israeli arts and culture. TREYSAR means a dozen and that seems like a good number of items in each segment to help guide us on this artsy journey into all things Israeli. Each post will focus on one topic, artform or artist and will represent a variety of disciplines. Whenever possible, I’ll include illustrations and links to things I feel will enhance the experience. The menu is eclectic, there is no rhyme nor reason to the order or choice of posts. I’m relying on my intuition and general fascination with the abundance that surrounds me.

My name is Dr. Avi Rose and I’m a bit of an Israeli arts and culture specialist/fanatic. Over the past 17 years or so, I’ve taught hundreds of students the story of how Israeli society evolved and the many forms of culture it produced. My teaching began in the classroom, but  often ventured onto the streets and into galleries, concert halls, museums and studios. I’ve shared the stories of Israeli’s cultural pioneers, along with the artistic legacies they bequeathed us. Together with my students, I’ve met with many passionate and talented artists, designers, producers and curators, celebrating the fruits of their labors. With them  I’ve painted, danced, sung and read; watched films and live performances, listened to lectures and concerts. I’ve cooked and tasted all kinds of delicacies, learning the stories they convey. All in all, I’ve experienced Israel in a myriad of fascinating and unique ways.

With the TREYSAR blog, I want to share some of this goodness with you. We may not be able to see a show in person, hear live music, visit a gallery or nibble on street food, but we can explore and appreciate what is out there. My hope is that the blog will give you a taste of Israeli arts and culture and offer new ways to connect with Israel and Israelis. In response to a world that often demonizes Israel and vilifies its society, I’ll do my best to present a more balanced, nuanced portrait of a culture that I have come to love–even with its many flaws. Most of all, I want to showcase the beauty and power of art, to celebrate the ways in which people create meaning and make sense of the world around them. This seems especially important in these dark, confusing times.

To get us started on this adventure, I offer you the first dozen delicacies. In this case, it’s twelve examples of what I love about Israeli arts and culture, of what this blog will delve into. Have a look, sample the goods and choose your favorite. I’m pretty sure that you’ll find a few hot, tasty treats to whet your artistic appetite from this eclectic TREYSAR dozen:

12 good reasons to get interested Israeli arts and culture:

It’s new… As a very recent addition to the family of nations, Israeli society is pretty fresh. The great advantage of this is that it is relatively untethered, free to consider what and how it wants to be. The arts that come from this process are likewise liberated in terms of style and substance. Thus, for example, painters, print-makers and sculptors have developed novel visual languages, as have choreographers and dancers. Music flows freely through all sorts of traditions, creating new rhythms and sounds in the process. Playwrights and directors are unafraid to experiment, offering audiences daring new takes on the ancient art of the stage. 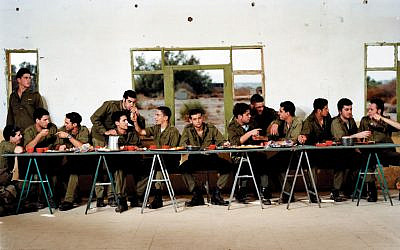 A great example of this innovation can be seen in the powerful photography of Adi Nes and Ori Gersht. Riffing on classic paintings, both men use film and photography in new and often shocking ways as powerful statements about the realities of Israeli life. With little reverence (but with deep respect) for the originals, their art perfectly captures the freedom and sheer chutzpah of Israeliness.

…but proudly based on the old.  Like the Hebrew language itself, Israeli culture is firmly rooted in the past as it moves rapidly toward the future. Even at its most modern, innovative  and rebellious, Israeli culture never fully abandons its history. Instead, it re-purposes and utilizes elements that feel pertinent, giving them new meaning or emphasis. Whether it’s the weighty prose of S.Y. Agnon or the kitschy-pop songs of Zvika Pik, biblical language and reference abound. Israeli dance and music modernize classic Jewish themes utilizing steps and tunes from the Diasporaic past to create new, exciting works. 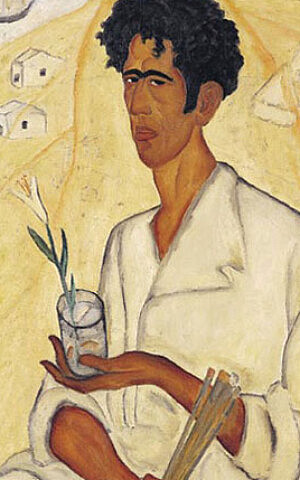 Non-Jewish traditions wind their way into the arts too. Reuven Rubin, one of the founding fathers of Israeli art, cheekily appropriated Christian visual symbolism in the service of his Zionist message. Anisa Ashkar uses her native Arabic text and tradition in contemporary performance art that is wild, critical and raw. 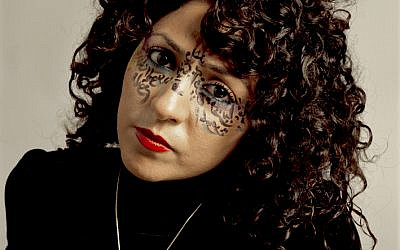 For a taste of what I mean, have a look at the film Nina’s Tragedies (2003) , which is a modern take on the biblical book of Job. Or, have a listen to the legendary Ofra Haza belt out her career defining club version of Im Nin’alu, a poem written by 17th Century Yemenite poet Shalom Shabazi.

It’s popular at home… There is a rumor that more Israelis attend the theater than football matches (the country’s most popular sport). While I found no hard evidence to back that up, I do think it says a great deal about the importance of the arts in this country. Israelis love and value Hebrew culture in all its forms. On any given night there are concerts, plays, art exhibits, poetry readings and dance–both folk and performance. Of course, the current pandemic has thrown a monkey wrench into the works. Undaunted (even when on the edge of a financial precipice), most of the arts institutions have shared on-line content. They did this–mostly for free–acknowledging the essential role that the arts play in the national psyche. For most Israelis (and for many Hebraophiles the world over), identity is wrapped up in the Hebrew arts.

Perhaps the strongest example of the centrality and popularity of Israeli culture can be seen in the annual Memorial and Independence day tradition of Shira B’tzibur or communal singing. The texts, music and togetherness (called Tzavta in Hebrew) of these events brings deep meaning. Have a look at these:

…and around the world. For a country with a population equal to that of a large western city, Israeli art features prominently on the world stage. Landscape architect Dani Karavan’s thoughtful, evocative constructions  can be seen all over the globe . The groundbreaking works of video and installation artist Michal Rovner have found their way into the high culture of the Louvre as well as more commercial spaces such as Chanel in Tokyo. Millions have binge-watched original TV series such as “Fauda” and tuned into Anglicized versions of shows such as “In treatment”. Let’s not forget that Israeli feature films have been nominated a respectable 10 times for a Foreign Language Academy Award. 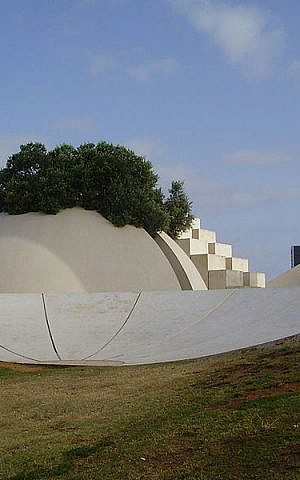 What is sort of amazing about Israeli arts and culture is that while it is very particular in its  language and context, it somehow makes sense to those outside its borders. Japanese audiences resonated with the story of loss and survival in Nir Bergman’s film Broken Wings (2002), naming it film of the year. Europe went mad for Israeli Divas such as Dana International and Neta Barzilai. Dancers and Normals from all corners of the globe are aficionados of Ohad Naharin’s “Gaga” body movement technique, especially during the recent lockdown when classes were offered on Zoom.

It’s political… The connection between art and politics goes back a long way, so it is no surprise that it appears so prominently in Israeli culture. Much of the early graphic work produced locally has been dubbed “art in service of an idea”, as it promoted the Zionist cause. However, there quickly emerged art that protested as much (if not more) than it advocated. One of the earliest projects that I’ve encountered is a powerful set of drawings created by artist Nachum Guttman entitled The Palestine Disturbances – News and Telegrams in Illustrations. Published as a pamphlet in the wake of the 1929 riots and massacres, it is highly critical of the Arab community who carried out the attacks and of the British who were seen to have stood idly by. The work was banned, confiscated and Guttman faced the real threat of incarceration. Check out selections of the piece here .

After the creation of the State, artists of all types produced a variety of work meant to shine a critical eye on the emerging socio-political structures. Strong, disturbing images of hunger and homlessness were produced in the so-called school of “Social Realism” by artists such as Ruth Schloss. These were soon followed by works that dealt with issues of class, race, religion, gender and sexuality. 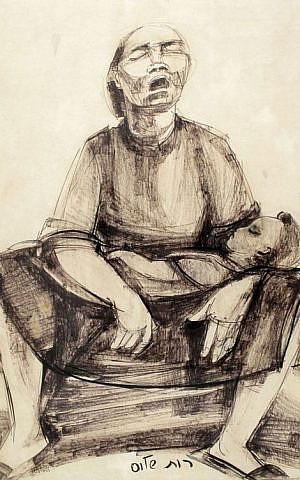 In the aftermath of the 1967 and 1973 wars, artists turned their attention to the ongoing conflict between Jews and Palestinians and to the question of territorial boundaries and occupation. Extremists such as David Reeb mercilessly championed one perspective, while others, such as David Tartakover, attempted to explore the effects of the conflict from both sides. Playwrights have long explored the political ideals, myths and realities of Israeli society. The strongest of these is the internationally acclaimed work of Hanoch Levin with his biting satirical cabarets such as You and Me and the Next War. 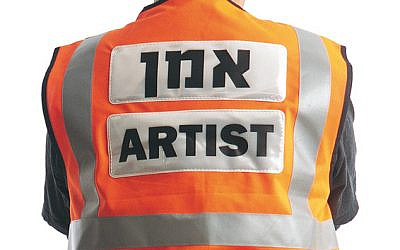 …and personal. The collectivist nature of Israeli society may have dampened individual voices in the early years, but never prevented artists from sharing their personal narratives. Films such as The Summer of Avia by acclaimed actress Gila Almagor, books by writers such as Eli Amir and Sayed Kashua and dance by choreographers like Amir Kolben all use personal narratives as the basis for their artistic vehicles. 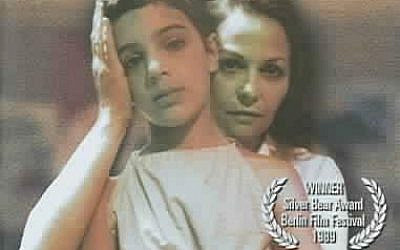 The emergence of identity politics in the later part of the 20th century gave Israelis a taste for greater liberation and individuality. This can be seen in the feminist visual art of Hila Lulu Lin and Nechama Golan.Music produced by Yehuda Poliker, Korin Allal and Ivri Leider helped open the conversation about same-sex love. The film, television and photography work of Esti Almo Wexler offer an honest, personal perspective on issues related to Ethiopian Israelis. 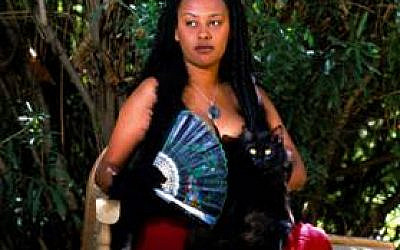 Hungry For More? Stop by the Basta (market stall) next week for another half dozen reasons to love Israeli arts & Culture.

About the Author
Dr. Avi Rose is an arts-based educator and psychologist. He lectures extensively on topics related to Jewish and Israel studies through the lens of culture. Dr. Rose trains fellow educators in the use of the arts as a learning tool. He is currently writing a book on the origins and development of the arts in Israeli society.
Related Topics
Related Posts
Comments