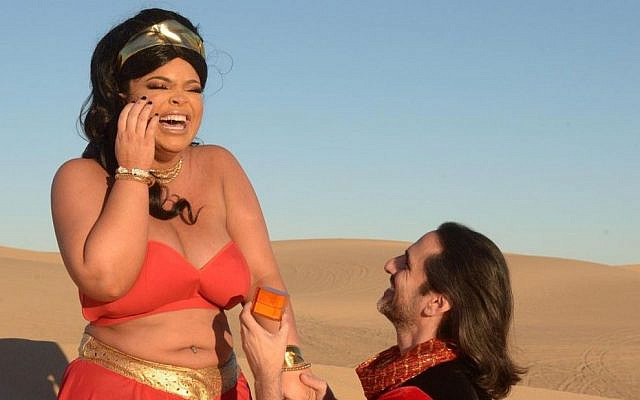 Trisha Paytas in the music video for her song 'I Love You, Moses' (screenshot)

The ascendance of Tiktok as a dominant social media platform has seen with it the rise of several new celebrities. Addison Rae, Charli D’Amelio, Spencer X, etc. Among this new breed has emerged a woman who has gained the reputation as the unabashed villain of the internet, specifically drawing the ire of Jews, Trisha Paytas.

Paytas, a sort of mixture between Howard Stern’s shock-jock manners and Paris Hilton’s lip gloss-laden brain-deadness, has risen to prominence on Tiktok mainly off of a massive wave of Jewish antipathy. Not since the Freedom Sunday March united Jews across America against the gross abuses of Mikhail Gorbachev against Refuseniks has the American Jewish community been so united against a single person.

The trouble with Paytas, the former escort and stripper, began on April 3, 2020, when she Tweeted, “I, too, am Jewish by insemination,” a reference to Paytas’ Israeli-Jewish finance Moshe Hacmon. From that point on, Paytas, the singer behind “I Love You, Moses,” a parody of her previous song, “I Love You, Jesus,” began making videos ostensibly trying to appear in accordance to her newfound Jewish identity, incorrectly reciting Jewish prayers and Hebrew phrases, wearing traditionally Jewish attire, and giving her thoughts on theology and Jewish history, which are quite unorthodox, to say the least. I urge you to seek out her Tiktok and YouTube videos as no amount of explanation on my part would do them justice.

As any somewhat well-read scholar of Jewish law knows, there are but two ways to become Jews; to be born to a Jewish mother or to convert to Judaism through an authentic, Orthodox rabbi under the auspices of a traditional legal process. Both of these things, however, have long been challenged by zealous, subversive revolutionaries. For a couple hundred years, self-appointed, unrecognized “rabbis,” who often do not keep halacha themselves much less serve as an authority on the subject, have been conducting their own non-halachic conversions, crying foul and unfairness when nobody wants to recognize them. Since the 1980s, some bodies of these self-appointed “rabbis” have sought to recognize non-Jews as Jews through the pushing of the heterodoxical doctrine of patrilineal descent, likely to salvage dwindling community participant due to their own advocacy of assimilation to the point of intermarriage and national suicide.

If our laws and standards, which we have kept for 3,000 years, are somehow deemed wrong or subjective, merely a matter of opinion, what exactly makes Trisha Paytas’ case for Jewish recognition wrong? If you can be Judaism cannot be conferred merely through motherhood, why can it not be conferred through insemination? If people can pronounce themselves and others as Jewish outside of the specific halachic process of conversion, why can’t Paytas do the same?

Furthermore, due to the recent ruling (read: bench legislation) from the Israeli Supreme Court, Israel must recognize “conversions” done in Israel outside of the halachic conversion process. Down this slippery slope, what is stopping Trisha Paytas from claiming Israeli citizenship under the Law of Return under the auspices of some half-cocked, non-halachic conversion?

If this kind of scenario makes you uncomfortable, it should. The idea that people who have no respect, no affinity for our people, our laws, our standards, our land, our tradition, our faith, etc. have some inherent right to fancy themselves a Jew and with it all of our privileges with none of our responsibilities is sickening.

There is a specific group of idealistic Jews so committed to modernist political doctrines, specifically doctrines of idealized equality and egalitarianism, that they feel deeply uncomfortable as part of a distinct nation, especially a nation that professes in all of its literature to be a “chosen people.” They recognize correctly, as British Prime Minister Benjamin Disraeli pointed out in a letter to Lord George Bentinck, that the very existence of their people is “a living and the most striking evidence of the falsity of that pernicious doctrine of modern times, the natural equality of man.” Jews have maintained a distinct sense of nationhood for three millennia, grounded in a sense of purpose, mitzvot. This subversive cabal, idealistic to the point of suicide, wishes to see their own people debased into a meaningless cultural flavor in the tasteless melting-pot of a globalized, egalitarian world, to be liberated from the bounds of our tradition and holiness so we can freely enjoy the fruits of mundane materialistic slavery.

There is an old expression in Judaism; more so than the Jews have kept Shabbat, Shabbat has kept the Jews. It is our standards that have kept our people alive when all of our advisories and contemporaries throughout history have been left in the past. If we fail to conserve them, if we let the goalposts continue to move, if we fail to push back on this internal subversion, we will lose our state, we will lose our people, and we will join the ranks of the Babylonians and Assyrians as study-terms for high school history class. First, we will be degraded into a nation promulgated by Trisha Paytas-style, irresponsible, irreverent, entitled imposters, then we will be no nation at all. Your descendants will not know your name, they will not speak your language, they will not serve your G-d, they will not be one of your people, their connection to you and their heritage will be nonexistent. It is necessary to have faith that this will not occur, but equally necessary steps to take proactive measures to ensure this will not happen. I urge you, stand up for yourself, your people, and your G-d, and against this subversive revolution before it is too late.

About the Author
Jesse Edberg is a spokesman for Yamina where he is specifically charged with running English-language youth engagement. While graduating from the Charles E. Smith Jewish Day School in 2020 and studying at the Tulane University of Louisiana, Edberg has also served on several American campaigns, most notably Larry Hogan's successful 2018 gubernatorial reelection bid, and has written for several online publications.
Related Topics
Related Posts
Comments