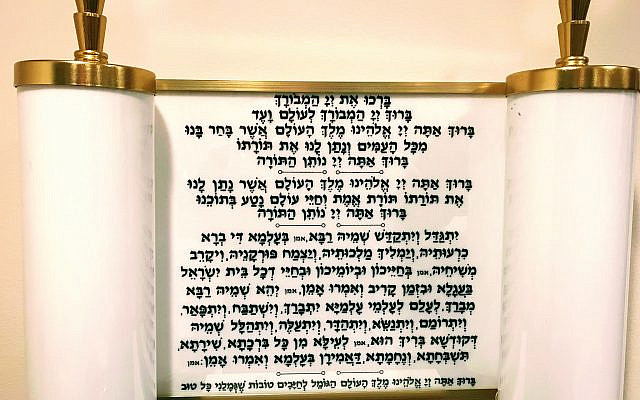 On Simchat Torah, we were at a synagogue in Florida, and at the kiddish, the Rabbi was saying how the holiday is to celebrate the Torah—finishing one cycle of reading and learning it and immediately starting another.

At which point, I was surprised to hear one lady in a big fancy hat and outfit ask the Rabbi:

Is the Torah part of the Bible?

To this the Rabbi, a little aghast, responded:

The Torah is the Bible!

Then “coincidentally” today in another synagogue in Maryland, the speaker asked:

What is the Torah?

I raised my hand, and responded:

My father, Fred Blumenthal, always taught me that the Torah was our guide for living (as a Jew).

The speaker liked that answer and then asked:

Why does the Torah start with Genesis [today we started reading Genesis] and all the stories in it and not just with the laws for living?

There was a brief silence, and then I raised my hand again and responded:

If the Torah just started with the laws, without any context for who we are, our relationship to G-d, and why we were created, we would question why we should follow the laws of the Torah. Genesis gives us the context for all this and provides the background for us to follow and live according to G-d’s word to us.

The speaker then said:

The Torah is not just the laws for the Jews but really for all Mankind; the Torah is really [the Bible] for the whole world, especially those of the Abrahamic descent (the Christians and the Muslims).

I thought about this for a moment and said:

But the Torah calls the Jews out as a “Chosen People” [reference Deuteronomy 7:6], so if the Torah was meant for everyone (Gentiles too), wouldn’t this be off-putting to them and also sort of like lighting a fire under the anti-Semitism already out there to ‘dislike the unlike’? It’s like if you have children and you give them something that says you “choose” one of the children from all the others as special, isn’t that going to kindle the sibling rivalry already naturally there?

If I were the Christians or Muslims, and saw the Torah that calls out the Jews as the “chosen,” even if it really means as a people with a special mission to be a “light unto the nations” [Isaiah 42:6] rather than as preferential, I would also have a “New Testament” or Koran to try and replace the “Old Testament” [Torah], so it was more favorable to me!

This obviously sparked a whole lot of dialogue with others saying that G-d didn’t really choose us, but we chose him, since according to the Midrash, G-d asked all the nations who would accept the Torah, and they all rejected it, except for the Jews who said:

We will do and we will listen!

To me, regardless of whether we say that G-d chose us, we chose G-d, or it was mutual, I still think from the Gentile’s perspective, it must be a hard thing to hear. Then as my wife, Dossy, pointed it, it is even more difficult when some Jews don’t follow the Torah, do bad things, and are essentially hypocrites. This makes the Gentiles even more angry at us. The point here is not to give a reason for anti-Semitism and the horrible persecution of the Jewish people for millennia, but to try and understand the different perspectives for what the Torah is and maybe also what it isn’t.

To me, as my father said, the Torah is our guidebook for life! What the Torah isn’t is a rejection of the Gentile. As it says, before the time of Abraham (Genesis 5:24):

Noah was a righteous, wholehearted man in his generation; Noah walked with G-d.

Both Hanoch and Noah were Gentiles, yet they walked with G-d! To me this means, that like the Gentiles that saved Jews in the Holocaust, they are “Righteous Gentiles.” Both Jews and Gentiles can walk with G-d, follow his ways and be good or they can stray from G-d and be bad.

The key is that everyone (Jew and Gentile) has an opportunity to do good or the opposite. We are all G-d’s children, and He loves all of us, and wants us all to learn and grow as human beings with the spirit of G-d breathed into us (Genesis 2:7). The Jews have a special mission to try and live by following the commandments in the Torah, as a good example to others. This is similar to the Kohanim and Leviim who had a special role within the Jewish people as the Temple priests and as the musicians and singers that accompanied them. No one is inherently better than anyone else.  We all just have our roles, and we a need to do them the best we can or learn to be better as we go along. Like we start the cycle of reading the Torah again with every Simchat Torah, so too the New Year is an opportunity to “up our game” and another chance to raise the “standard of living” according to G-d’s will.