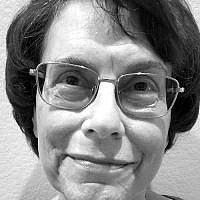 The Blogs
Esther Toporek Finder
Apply for a Blog
Please note that the posts on The Blogs are contributed by third parties. The opinions, facts and any media content in them are presented solely by the authors, and neither The Times of Israel nor its partners assume any responsibility for them. Please contact us in case of abuse. In case of abuse,
Report this post. 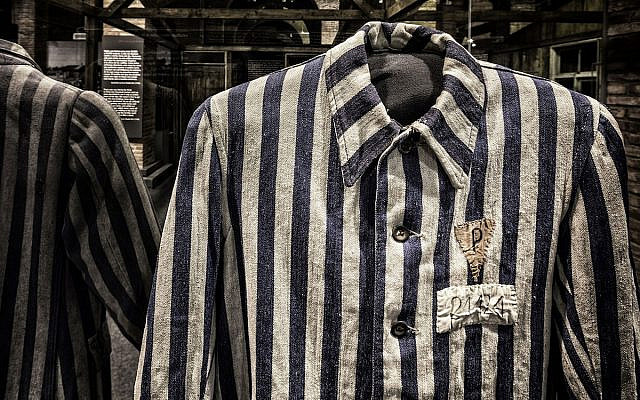 Shirt in Foreground Worn by a Political Prisoner in Auschwitz. Collection of the Auschwitz-Birkenau State Museum, Oświęcim, Poland. ©Musealia (Courtesy)

When a parent tells a child stories about their lives, the stories live in the child’s imagination until reality intervenes. One of the most powerful stories in my dad’s Holocaust experience involved an incredible escape from death that I thought I comprehended until I met concrete, physical evidence at the Museum of Jewish Heritage – A Living Memorial to the Holocaust last November in New York. There was a family wedding on the East Coast so it was an opportunity for me to see the award winning exhibit, “Auschwitz. Not long ago. Not far away.”

My father, of blessed memory, was in a total of 12 concentration camps, most notoriously Auschwitz-Birkenau. Some of the camps were railroad construction facilities that closed and relocated. He was then sent to Auschwitz-Birkenau and to the coalmine sub-camp, Jaworzno. Others were camps he passed through during evacuation from the Auschwitz network of camps and the Death March. It was during the retreat away from the advancing Soviet troops that this particular brush with death occurred.

Prisoners from Jaworzno were marched to Blechhammer where they were deposited. The prisoners previously held in that camp were evacuated and my dad’s group suddenly found themselves without guards. The starving men went in search of food, with my dad going into the camp kitchen. He found “beautiful potatoes” that were cooked but not distributed. In an effort to bring some food back to his brother in the barracks, he took a piece of wire and tightened the bottom of his pant legs and began storing potatoes around his legs.

He heard shooting and saw a prisoner shot dead in the doorway of the kitchen. The Nazis had returned and he knew he would be shot on sight, but where could he hide?

As he told the story, he climbed into a large pot, the kind used to make “coffee” for thousands of prisoners, and “closed the door.” Closed the door? Did he mean he closed the lid? That always puzzled me and I didn’t know if maybe he didn’t know the right word in English? No, he was right and I was confused and it took the exhibit to set me straight. 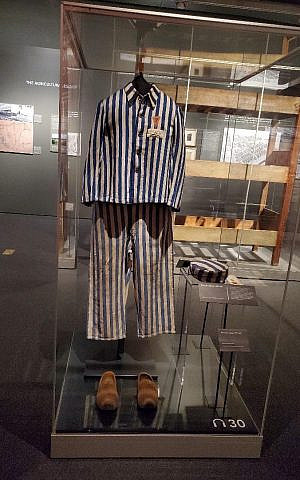 While walking through the exhibit, listening to the museum-provided headphones, I heard the commentary explaining a prisoner’s uniform in a display case. There was the familiar striped uniform and a pair of wooden shoes. It was explained that the shoes were often problematic because prisoners got blisters and infections from wearing them. I paused and said to my companion that those wooden shoes saved my dad’s life. I was going to explain in detail later.

As I turned into the next section of the exhibit, I stopped in my tracks. There was a large cauldron. This was a “large pot, the kind used to make ‘coffee’ for thousands of prisoners.” This was the kind of pot my father hid in. Now I understood why he said he closed the “door.” The lid was hinged, not separate from the pot.

For years I had looked for photos of “the pot” my dad might have hidden in but never found it. This was a surprise and, sadly, it was after he passed away so I could not share this with him. 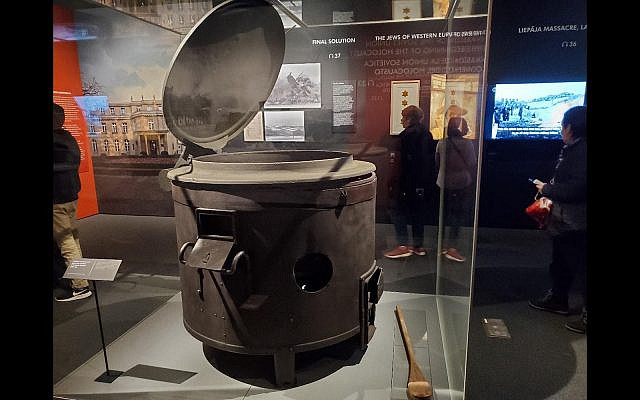 Cauldron on display as part of the Auschwitz exhibit. (author’s photo)

But wait, I have not finished the story of his brush with death. There were other prisoners in the kitchen when the shooting started. My dad and another man were resourceful enough to make use of the available pots but the other man had regular shoes and the bottom of the cauldron was still hot, so he had to get out. Nazi guards came in and shot everyone they saw in the kitchen but they didn’t see my dad because he was in the pot and had “closed the door.” If he hadn’t had wooden shoes, which provided insulation from the heat, he would not have been able to remain hidden and would not have survived. When the shooting stopped, he was the only prisoner to walk out of that kitchen alive.

He reunited with his brother and told him what happened. Shortly thereafter the Nazi guards collected the prisoners in Blechhammer and resumed their Death March. My dad and his brother got separated but both survived. After months of harrowing experiences, my dad escaped the Nazis in May, 1945.

And after years of knowing this story in the abstract, I saw concrete proof.