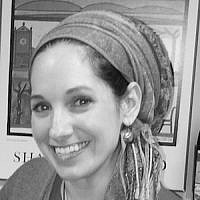 “My heart is in the East, and I am at the ends of the West”. This opening line of the poem by the 12th century Jewish physician, poet, and philosopher, Judah HaLevi, describes my relationship with Israel as a Jewish American. Although I live miles away from Israel, I think of and pray for her each day. Israel is also important to me because I feel the impact of the Holocaust from the stories of my grandparents, whose families and communities were totally destroyed. It was my grandparents who emphasized the importance of Israel for Jewish survival.

I have always made it a priority to advocate for Israel throughout high school and in college. Even now as a married mother of four, I still consider it imperative to be proactive and not remain silent in the face of those who seek to delegitimize Israel. At times I feel inadequate to defend Israel since I am not an Israeli, therefore I feel a deep responsibility to learn as much as I can in order to advocate effectively.

One thing that is very important to me is supporting the Israeli Defense Forces. I am especially proud of my friends who have served in the IDF and am thankful to them for sharing their testimonies with me about their experiences, validating the integrity, morality, and conscientiousness of the IDF. I hope that you will gain as much inspiration from reading their accounts as I have, and that if you are passionate about Israel like I am, you can use their words in your advocacy efforts, too.

C.W., a Corporal in the Israeli Air Force who works as part of a first response security unit, shared the following regarding the respect the IDF holds for human life:

There is a script that everyone in the IDF must memorize. It is the procedure of having an intruder identify himself, giving him the chance to surrender so that we can avoid using force if possible.. We are sure to call out the commands of this procedure in both Hebrew and Arabic and even during the arrest we are trained to stay calm and be as gentle as we can with the intruder. It is army law that we must wait to even draw our weapons until we can see that the intruder is still advancing towards us, has a weapon in hand, and has the intention of causing harm to human life. I truly believe that the IDF puts human life above all else. Whether it is equipment the intruder is trying to steal, or secret information, their life as a human comes before all the army has to offer except for their own soldiers. We are protected as soldiers under the army but we are also taught that respect for human life must come before all else.”

Y.S., who was stationed near Jericho during the Second Intifada, shared this story that contains a similar message:

There was a dirt road near our base, and we were responsible for ensuring that no traffic would pass through, since the area was a closed military zone. One evening during training, an Arab car began making its way down the road. I was there with my commander and two other soldiers. My commander waved to the driver to stop the car and prepared to inform the passengers that they were not permitted to continue down the road, and would have to turn around. The car pulled over, and as my commander approached it, with the three of us standing behind, he told us to place our rifles behind us, and not in front of us as they had been, so as not to intimidate the people that he was pulling over. Had the car been full not of innocent passengers but terrorists who were trying to make their way into Jerusalem or its surrounding towns, the few seconds of delay in re-positioning our rifles could have made a significant difference. Nevertheless, my commander wanted to make sure that we were not intimidating these Arab travelers unnecessarily. That measure of sensitivity always stayed with me.”

According to B.S., a sergeant who served in the Navy and in reserve duty patrolling borders:

The IDF is well disciplined and is forward thinking in that if a mistake is made, it goes out of its way to investigate and then take corrective action – changing protocols, etc. if need be… Hand over heart, I have not seen abuse, largely because of the quality and discipline of the soldiers and officers with whom I served.”

Avner Even-Zohar who served as a captain in the Israeli army and currently serves on the speakers bureau of the Jewish National fund reminded me of the following relating to the most recent conflict this past summer:

During Operation Protective Edge in Gaza in July 2104, Palestinian envoy to the United Nations Human Rights Council in Geneva said in an interview that the missiles fired by Hamas against Israel represent a ‘crime against humanity.’”

Since Hamas fired over 4,400 rockets towards Israel since July 2014 alone, this equates to thousands of Hamas crimes against humanity as defined by Palestinians themselves.

At the same time, Col. Richard Kemp, the former commander of all British forces in Afghanistan, declared that the IDF is the most moral army that the world has ever known, stating that “no other army in the world has ever done more than Israel is doing now to save the lives of innocent civilians in a combat zone.” He concluded by saying that “the Jewish people should be extremely proud of the State of Israel.

Captain Even-Zohar concluded with this statement:

While I have always felt proud to be Jewish and to have served the State of Israel as an IDF officer, it is reaffirming to hear it from a non-Jewish military hero who was awarded for his service to the UK by Queen Elizabeth.”

My message to anyone, Jewish or not, living outside of Israel is this: even though we may be physically removed from the scene, advocating for Israel is one of the most important causes that we could be involved in. We should listen to what is really happening in Israel, and be proud and cherish Israeli democracy, human rights and morality. Supporting the IDF is especially important at a time when anti-Israel activists seek to baselessly tarnish its reputation. I hope that I was able to help spread awareness of the great work that IDF soldiers do; Israel’s brave service members surely deserve our respect and admiration. May they stay protected and safe along with all of the incredible people of Israel, and may we see a lasting peace in our lifetime!