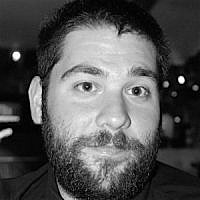 The Blogs
Jason Roth
Apply for a Blog
Advertisement
Please note that the posts on The Blogs are contributed by third parties. The opinions, facts and any media content in them are presented solely by the authors, and neither The Times of Israel nor its partners assume any responsibility for them. Please contact us in case of abuse. In case of abuse,
Report this post.

‘The Donald’ has upped the ante of business in the political realm and most recently the current election. Donald J. Trump, the Republican hopeful has amassed his fortune in business and is currently (as of April 11, 2016) leading the GOP in delegates. Though he has less time in the political realm than others running for presidency he has his views on the business of geopolitics and is making them known to all. Trump is an advocate for ‘America First’ and his current rally cry of ‘Make America Great Again’. Listening to him speak or reading a transcript from his interviews and debates brings forth a serious question for voters and citizens of the world. It is apt to ponder what Trump’s thoughts are on the geopolitical scale (beyond building a wall)? Or in short, what to Trump is the business of geopolitics?

It can be construed that Trump’s ‘America First’ stratagem will be employed as a business tactic to increase America’s international authority. When considering some of the statements that he has made and his plans for ousting China as a powerhouse on the global scale of economics it becomes apparent this is what the former reality star is planning. In an interview with the New York Times, Trump stated that America ‘will not be ripped off anymore. We’re going to be friendly with everybody, but we’re not going to be taken advantage of by anybody.’ In business it is generally considered a smart move to be courteous while watching out for your own/company’s interest.

One of the areas in the world that America has held a military presence is South Korea. Trump was asked in an interview with the New York Times on whether or not he would withdraw troops from the region if South Korea and Japan did not increase payments to cover the cost of holding forces there. Trump said that he would remove the troops because America ‘cannot afford to be losing vast amounts of billions of dollars on all of this… And I have a feel that they’d up the ante very much.’ This contributes much to his ‘America First’ and ‘making America great again’ by utilizing a business tactic.

This is not the only time Trump has stated that he would want more compensation for troop use overseas. On his campaign website his intentions are clear that he wants to strengthen the military and deploy appropriately in the East and South China Sea. His reasoning is that it would ‘discourage Chinese adventurism that imperils American interest in Asia and shows our strength as we begin renegotiating our trading relationship with China.’ He wants to show the world that America is back in the ‘global leadership business.’

Through the years Donald Trump has not shied away from stating his viewpoints. An article from Newsweek remembers that a handful of decades ago Trump called on America to ‘stop paying to defend countries that can afford to defend themselves’ indicating both Japan and Saudi Arabia. While only a few years ago he asked ‘how long we (United States) will go on defending South Korea from North Korea without payment?’

Trump went on to explain more recently that in order to preserve money and save the deficit from dropping even lower, ‘pulling back from Europe would save this country (America) millions of dollars annually. The cost of stationing NATO troops in Europe is enormous.’

Beyond military might, another factor in geopolitics that Trump could potentially excel in is trade. Trump’s years of experience in business may allow him a stronger position than other candidates. He has laid out an extensive plan on how to deal with China. Trump wants to bring America back to being strong economically. He plans on being strong handed with China in order to bring fair trade and jobs to Americans.

International trade is key to the continuation of global politics. Stephen A. Schwarzman, the CEO of Blackstone Group (global private equity and financial advisory firm) is quoted as saying, ‘For future geopolitical stability and global prosperity, we need to build a culture of greater trust and understanding between China, America and the rest of the world.’ Granted, Trump’s proposal of calling China a currency manipulator does not help towards a greater trust, it does expose Trump’s problem to the world. Once the issue is known to all it can be helped. Trump wants to negotiate with China and feels that the way to do so is to call them on currency manipulation, end their intellectual theft, and illegal export subsidies. By negotiating with China it can create a culture of greater trust and understanding.

Trump is a firm believer in negotiating from strength. He plans on becoming stronger domestically first in order to be stronger globally. He feels that lowering corporate tax, attacking debt and deficit and again strengthening the U.S. military and strategically deploying them will allow this.

His second point (attacking debt and deficit) is key towards China. He wants to close the deficit and reduce debt so that ‘China cannot blackmail us with our own Treasury bonds’.  While strengthening the military will ‘discourage Chinese adventurism that imperils American interests in Asia and shows our strength as we begin negotiating our trading relationship with China.’

His views on the business of geopolitics are criticized. Some believe that he does not have a real strategy because of the way he has been responding to questions, leaving much to the imagination. They criticize his lack of understanding that placing United States Armed Forces in South Korea and Japan are pieces to a bigger puzzle that deal with a global hegemony and a regional balance of power.

However, looking at his views and plans from solely a business perspective the simplicity of them could potentially work. There is a famous quote that emphasizes this point that is attributed to Leonardo da Vinci, ‘Simplicity is the ultimate sophistication.’ Trump has ever been a tenacious businessman that craved growth and profit. His intention to ‘make America great again’ by theoretically turning the United States into a business and treating it as such will allow him to view everything from his own comfort zone. By utilizing his skills and sticking to simplicity he could force America to turn a profit. Either way, this will undoubtedly be an interesting election.