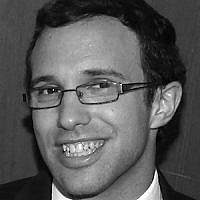 The Blogs
Shai Landesman
Apply for a Blog
Advertisement
Please note that the posts on The Blogs are contributed by third parties. The opinions, facts and any media content in them are presented solely by the authors, and neither The Times of Israel nor its partners assume any responsibility for them. Please contact us in case of abuse. In case of abuse,
Report this post.

Truth is tricky, isn’t it?

Oceans of ink have been spilled by the greatest minds of humanity in the attempt to ascertain its existence, define it, map out paths for those who would seek it, and forge weapons for its defense from those who would assault it.

And assaulted it is. Often, and skilfully. Every thinking person is tempted at more than one point in his/her life to deny its reality, to cast off the yoke of the imperative to conform one’s beliefs and ideas to it.

Yet we all know it’s there. We can’t help but listen for it in everything we hear. We listen for that elusive, ethereal ring of truth. That signal. Subtle, escaping description, which tells us to take something to heart. We know it when we hear it.

At least, we usually do…

For, of course, there are a myriad ways we can, and do, go wrong. Our higher faculties of reason and rationality are often lazy, and easily corruptible. We can hardly ever know everything that is relevant to a particular issue or case, and so we must make do with an imperfect judgement, with getting merely closer to the truth. One of the ways in which we do this is to discern patterns from our experience. We deduce from our experience the kinds of things which tend to be true, and we confer the status of “true” to things of the same kind in the future. It is altogether fitting and proper that we should do this, but the thing about patterns is that — much like with pointing a laser at the moon — a slight imprecision in the outset can produce grave errors in the result. If our understanding of the pattern is sketchy or tainted, we will see things that follow this faulty pattern as true, even if they are distinctly not so.

In my time in yeshiva, I sat through a lot of preaching. I don’t mean to say that it was all bad, but one of the frequently employed techniques was to basically shame the audience into agreeing with whatever idea the speaker was preaching by pointing out the fact that it is in one’s self interest to reject it. For example, if the rabbi wanted to convince us that we must defer in all things to the views of the Gedolim (great rabbis of the generation), he would point out that our natural arrogance and self-importance would incline us to believe that we’re entitled to our own opinion, and so because we are biased toward this position, it must be false, and the opposite true.

This kind of thing plays upon a specific kind of ‘faulty truth pattern’ (from here on out FTP) namely the “Bias=False” pattern. We have all had the experience of realizing that we had taken a false position because of our biases. This is a powerful emotional encounter with truth, and if we’re not careful we learn to automatically associate going against bias with truth. The mistake is a simple one. We certainly should learn to strive to prevent our biases from figuring in our reasoning, as they are logically irrelevant. We should not learn that our bias is in itself a good indicator that the opposite position is true.

I more than suspect that this particular FTP is exploited in religious institutions around the world, not just the type that I was a part of. Indeed, this kind of reasoning is employed in political discourse all the time, usually in the form of the claim that someone who is privileged in some way cannot possibly be right about issues related to his/her privilege. When accused of bias in this manner, it is very tempting to capitulate, as it would give us that warm fuzzy feeling associated with overcoming our biases, and the argument is of the kind that we’ve come to identify with truth.

Another example is to be found in this article from just over a year ago. I encourage you to read it, but the main thrust of this peace by former AP reporter Matti Friedman is that the journalistic corps in Israel has developed a kind of internal political activist ethos, thus becoming an actor in the very story it’s supposed to be dispassionately observing and reporting on. He claims that the members of the press have become corrupted by their personal ties with partisan NGOs operating in the area, and other institutions. In one point in the article he mentions how a journalist slanting things in a very anti-Israel direction can “claim to be speaking truth to power, having selected the only ‘power’ in the area that poses no threat to [his] safety.”

Here we have another FTP. The idea of “speaking truth to power” is basically the raison d’etre of journalism, enshrined in the apparently inauthentic George Orwell quote: “Journalism is printing what someone else does not want printed; everything else is public relations.”  I happen to love this quote, whatever it’s origin. Journalists are supposed to report the real story even when the publicity will go against someone’s interests. This becomes especially important when reporting on powerful entities, such as large corporations and governments. Often a government that is doing something wrong will seek to intimidate those looking to expose it. In these instances, when the journalist reports it anyway it is indeed a great triumph for truth, because the journalist’s instincts for self-preservation did not stop him from reporting the facts.

This is all lovely, but the mistake that can then be made is to automatically equate opposition to power with truth. We should learn not to be intimidated by power when seeking the truth. We should not learn that whatever those who happen to be powerful would want us to think is necessarily wrong. This is the mistake the middle east press corps makes when it sees whatever is subversive to the most powerful actor, Israel, as necessarily being the more authentic narrative.

There’s another layer here. The bravery of speaking truth to power does not come directly from the power of those about whom a journalist is reporting, but from the degree of the threat that they pose to him. In this case, while Israel is more powerful, Hamas are certainly more of an actual threat to someone who damages their interests, so even the sense of bravery is misplaced. (This is what Friedman is actually referring to in the above quote)

What these FTPs have in common is the mistaking of that which generates positive emotions in instances of truth realization with that which actually makes the true things true in those instances. When we overcome our biases to see the truth of an unattractive position, or when we speak truth to power, we experience a positive emotion which stems from our very best selves, from our deep and abiding love for truth and integrity. Once again, it is altogether fitting and proper that we should feel this, as this emotion supplies us with motivation to seek truth in the future. However, it is not the actual overcoming of the bias or speaking truth to power which makes things true. It is facts and logic. If reality and logic dictate that that which we are biased toward is true, then the fact of our bias does not make it any less true. Not one iota. When we forget this we are as Pavlov’s dogs, conditioned to give our agreement in response to the irrelevant stimulus of the chance to feel that warm and fuzzy feeling that comes with overcoming bias.

The reason Trump is leading by a mile in an actual real life presidential race, is because he represents the backlash against Political Correctness.

Many people in the US are simply fed up with the excesses of PC. Specifically, they’re fed up with not being able to point out the blindingly obvious because it is “offensive”. Their world is slowly becoming a place where reality is trumped (yeah yeah) by feelings in a process which has been endorsed by the current administration, and they wan’t to do something about it. This reaction is good. Political Correctness is a grave threat to western civilization (and especially to Israel).

Brash. Bold. Confident. Unapologetic. Never shying away from confrontation. Is willing to call things by their names. These are some of the qualities we would expect from an Anti-PC candidate, a defender of truth. Trump is all of these things. The thing is, that he is missing the one quality which gives the aforementioned ones their worth: Integrity.

Trump’s supporters are falling prey to another FTP. They know that a candidate who would stand up for the truth in the face of PC would be willing to say things to people’s faces, even if it offended them. Seeing this would create a feeling of great satisfaction in hearing the truth overcoming petty personal and political considerations. So when they see Trump saying all the things you can’t say, they surmise that he is the man to stem the tide of PC relativistic nonsense. But sometimes arrogance is just arrogance. Not everything you cannot say is true. Too many voters are mistaking sheer arrogance and opportunism for principled integrity.

How else to explain how a man who has flip-flopped on basically every major issue, who is so self-absorbed he makes Narcissus look like Mother Theresa (at least Narcissus’s hair was real). Seriously, read this official press release from his campaign regarding his decision to skip the last Republican debate. He always talks like that. The man can’t seem to go three sentences without mentioning how amazing he is, how amazing are his works, and how amazing everyone thinks he is.

Americans are following Trump because his manner of speaking seems to them to have the ring of truth. But this is not the ring of harmonious resonance with the principles held by our elevated selves, but a cacophonous clang amplifying the anger in our thumping hearts. I just hope to G-d that when it comes to it, the primary voters will remember the difference.

About the Author
Born in the US, made Aliyah at 3 years old. Going to Hebrew U to study law in October. Was in Yeshiva for 7 years. interested in basically everything. Aspiring writer, somewhat-more-than-amateur musician, armchair philosopher, and connoisseur of human folly (including, hopefully, my own).
Related Topics
Related Posts
Comments