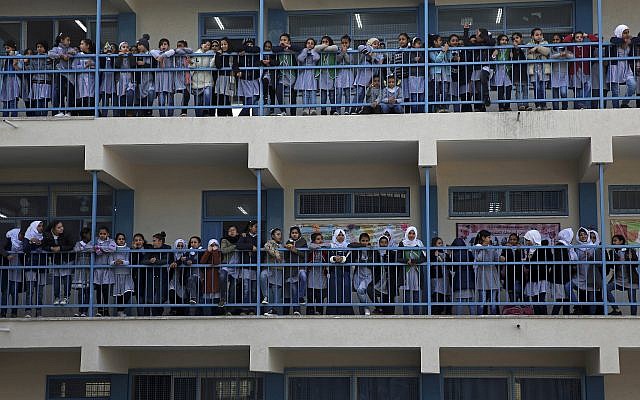 It looks like we have simply gotten used to the status quo with the Palestinians. We do not want to better or worsen our situation, nor are we interested in bettering or worsening their situation. This can be the only way to explain Israel’s alarmist reaction to Trump’s new and correct policy. It seems that the more Trump becomes embroiled in disgrace and personal scandals, the more his decisions on Israel and the Middle East improve. The US administration announced this past week that it was dramatically slashing its funding to UNRWA and making a fundamental change in its policy toward this organization. Let us not forget that the US is the largest supporter of UNRWA. Instead of praising and encouraging this decision, sources in Israel’s defense establishment were quick to warn of a vacuum, chaos and escalation of violence, which would benefit Hamas.

Now let us get a few points clear. Any tourist participating in a tour of UN headquarters will be told by the guide that the UN has a refugee agency, and in addition, a special agency for Palestinian refugees. We took the tour two years ago and our son asked why there were two agencies. The guide was unable to give an answer. UNRWA is the only UN agency dedicated to dealing with a specific group of refugees. It openly declares that it does not aim to settle the Palestinian refugees in other countries and thus relieve their plight and misery. In addition, UNRWA’s definition of a refugee is unique. Only in UNRWA are the descendants of Palestinian refugees also defined as refugees. This explains why their numbers are continually increasing and currently stand at 5 million fake-refugees. And that is before we have even mentioned the financial corruption in the organization or the strong links many UNRWA workers have to terror and Hamas.

Maybe we are comfortable with the situation as it stands. As far as we are concerned, let the Western world continue to send funding, the money will continue to flow and educate an additional generation to hate, and the number of refugees will continue to grow. However, those who do not only take a short-term view of the situation ought to be aiming to crush the entire industry of lies once and for all. This should also be in the interest of those who advocate dividing the country: to expose the true number of Palestinians and then to begin transferring funds for education and infrastructure through different channels. This is precisely what Trump proposes. Perhaps this is the norm with the businessman who became president. We have to look where the money is. He does not want to be a freier, a sucker and he is not willing to allow American taxpayers’ money to fund this fiction.

Yet, instead of Israel supporting Trump as he begins to deal with the lie called “The Refugees’ Right of Return,” Trump sits in the White House and reads that Israel is warning that his policy could “set the region on fire.”

How have we lost the ability to state the most obvious things in a loud and clear voice, to speak out against the perpetuation of the Palestinian refugee problem and the idea of the Right of Return to Israel? How come that Washington understands what we sometimes forget?