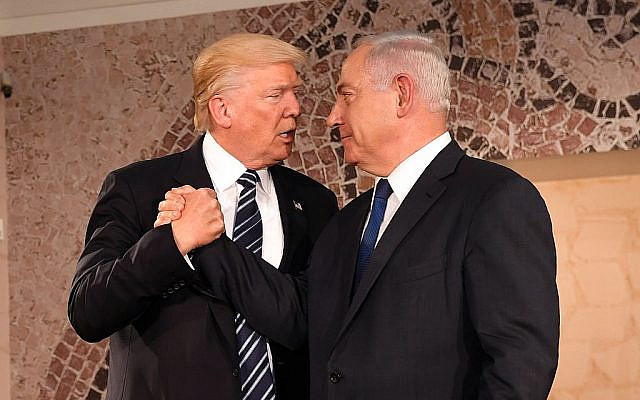 President Trump at the Israel Museum in Jerusalem on May 23, 2017 (credit: U.S. Embassy in Israel / Wikimedia Commons).

U.S. president Donald Trump is doing to Israel what Arab states have done to the Palestinians for over 72 years: giving them enough rope to hang themselves while ultimately being unwilling or unable to help them in the longer term.

Arab states got the Palestinians into the mess that they are currently in by refusing to accept the 1947 partition plan, and by choosing to dangle in front of them the promise of having all of Palestine. Even though the Arab world has now given up on that promise, by all accounts, most Palestinians still live under the delusion that they will return to their homes in what is now Israel, leaving them incapable of facing reality and of working towards real solutions.

Trump has not done much, but what he has done, or more precisely not done, will doom Israel if it proceeds to its natural consequences. Thanks to Trump, Israel is planning to annex parts of the West Bank, leading inevitably to many more Palestinians becoming Israeli citizens, which in turn will lead to political gridlock and eventually to civil war and to Islamist control of the state. Israelis should look north of the border at what is happening to the Christians of Lebanon. This is their future if they continue on their current path.

This will not happen immediately, but the annexations, once started, will be difficult to stop. Annexation activists are already demanding more than what Israeli Prime Minister Benjamin Netanyahu has promised for July of this year.

The Jordan Valley is of great strategic importance to Israel, but the presence of Israeli troops is already sufficient to meet that requirement. Annexation provides no additional advantage, and it opens new cans of worms, including tension and possibly conflict with Jordan.

If Trump was a friend of Israel, he would pressure it not to make fatal mistakes. That is what friends do, which is why that has been the policy of every Republican and Democratic administration before Trump, and it would be the policy of Joe Biden if he is elected President.

Trump, however, does not support Israel as a Jewish state. He supports Israel as a political tool to gain or retain U.S. evangelical support. Not many American Jews are fooled by Trump’s support for Israel. In fact, a study shows that Jews constitute the religious group that is the least likely to support Trump (although Muslims do not seem to have been included in that study).

By going down the rabbit hole of annexation, Israel is doing what the Palestinians have been doing for 72 years: choosing ideology over pragmatism. This approach has failed the Palestinians, and thanks to Trump, it will also fail Israel.