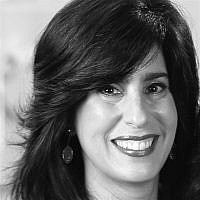 The Blogs
Sara Lehmann
Apply for a Blog
Advertisement
Please note that the posts on The Blogs are contributed by third parties. The opinions, facts and any media content in them are presented solely by the authors, and neither The Times of Israel nor its partners assume any responsibility for them. Please contact us in case of abuse. In case of abuse,
Report this post.

Seventeen candidates and twelve months later, Trump emerges first. As befitting for a man with an “America First” agenda. And equally astounding for a man whose detractors spanned the political spectrum from far right to far left.

Weary of the constraints of politically correct liberals and disappointed by conservatives who fail to fulfill their promises, Middle America, that forgotten child, rose up. And it gave us a political unknown with a brash mouthpiece who promises to restore the greatness of this country and who inspires hope among those who had abandoned it.

“America First”, so natural and enmeshed in early American thought, has suddenly become a novel idea. Patriotism has awoken from a long slumber, induced by an enigmatic mixture of backlash against liberal internationalism and neo-conservative interventionism.  Both sides of this coin colluded to produce an almost unrecognizable America over the past several decades. But with Trump as the presumptive nominee at the Republican helm, nationalism is once again becoming as American as apple pie.

In his foreign policy speech last month, Trump began by stating that his “foreign policy will always put the interests of the American people, and American security, above all else. It has to be first.” Sounds commonsensical?  Not to Americans who came of age with administrations whose overseas activities shifted with shifting philosophies.

America’s current generation was reared with fluctuating interventionist policies, from the Gulf War to Clinton’s launching of the NATO War on Yugoslavia to the Iraq War and the Bush Doctrine and finally to Obama’s sporadic forays and evasions in the Middle East. What we have ended up with is a more chaotic world and an American economy descending in tandem.

Trump is correct in stating that “no country has ever prospered that failed to put its own interests first.” If it is the job of the world’s superpower to be its policeman, it can only successfully police others from a position of strength. Or as Trump put it, “America will continually play the role of peacemaker….But to play that role, we must make America strong again.”

This challenge is made especially more acute after two terms of a reckless Obama administration whose dual pursuit of policies and lack of policies have created madness in the Middle East. Obama’s actions in Iraq, Libya, Egypt, Syria, and especially his deal with Iran, have shifted allegiances between allies, creating safe spaces for terrorists, while degrading America. In the process of blurring distinctions between friend and foe, he has stripped America of its prestige and its standing on the world stage.

Perhaps no other country than Israel is so endangered as a consequence of Obama’s behavior. And no other country than Israel seeks to gain more from a strengthened America. As the only other democracy in the Middle East, Israel is equally threatened by Obama’s demeaning of America’s exceptionalism and his pandering to Middle Eastern despots. And as America’s closest ally in the Middle East, Obama essentially apologized for Israel too when he embarked on his international apology tour.

Contrary to some of Trump’s critics, American exceptionalism should not be taken as a threat to other nations but as a boon to their struggles. America’s belief in its own self-worth is the impetus for its belief in preserving the worth of others. “America First” should be the rallying cry of America’s friends and the battle cry against its enemies.

An April Pew Research Center poll found that 57 percent of Americans agree. They believe that America should deal with its own problems first. The new survey “finds the public wary of global involvement”, which is not difficult to understand. It’s hard to be sympathetic to the notion of “nation building” on a different continent when your own nation is in need of building.

Some Jewish groups, most notably the ADL, have taken exception to this view and complained that the slogan “America First” has overtones of anti-Semitism. An ADL press release urged Trump “to reconsider his use of  the phrase ‘America First’ as a slogan describing his approach to foreign affairs, citing its anti-Semitic use in the months before Pearl Harbor by a group of prominent Americans seeking to keep the nation out of WWII.”

Jonathan Greenblatt, the CEO of the ADL who served as Special Assistant in the White House to Obama, criticized Trump’s use of a phrase that was “historically associated with incivility and intolerance.” However, he was forced to admit that “the undercurrents of anti-Semitism and bigotry that characterized the America First movement – including the assumption that Jews who opposed the movement had their own agenda and were not acting in America’s bests interest – is fortunately not a major concern today.”

Greenblatt would be well advised to remember that, in addition to his admission of a poorly used parallel, America was only able to win WWII because of its military strength. Any humanitarian aid America extends to other nations, a hallmark of liberal interventionist policy, is contingent on its ability to do so.

“America First” does not mean “America Only”. It means that a country owes it to itself to have the stability and strength necessary to compete in global affairs and to maintain the wherewithal to sustain its citizens and future generations. Only then can it have the ability to help others. For lovers of both America and Israel, it means that guaranteeing America’s strength also guarantees strength for its Middle East ally.

While Israel gives back as much or more than it receives from America in financial and military aid, Israel also relies on its friend for its political and diplomatic standing. The Jewish country can continue to count on the bounties of this friendship during negotiations, at the UN, and in manners of diplomacy only if America continues to carry its own weight.

Sustaining America first as the prerequisite for sustaining other countries is hardly the mark of a xenophobe. And it’s more than just the mark of an American patriot. It’s the mark of a patriot of the world.

About the Author
Sara Lehmann is an award-winning New York based columnist and interviewer. Before joining Hamodia in 2018, she was a columnist and interviewer for The Jewish Press. Her writings, which can be seen at saralehmann.com, have been published in The Jerusalem Post, JNS, Times of Israel, Arutz Sheva, The Daily Caller and other publications.
Related Topics
Related Posts
Comments