Donald Trump’s endorsement for extremist politics online could very easily spill over to the real world.

Most people would probably not have heard of Britain First before the U.S. president retweeted their deputy leader’s videos this week.

In effectively endorsing them to his 43 million followers on Twitter, he gave them the oxygen of publicity – he brought their views in from the fringe, to the centre.

He sanitised them, giving them mainstream publicity.

It is a group with virulently anti-Islamic views. Leader Paul Golding and deputy leader Jayda Fransen have both been arrested on countless occasions, charged with causing religiously aggravated harassment, threatening, abusive or insulting behaviour, causing criminal damage and assault.

And they’ve tried to court British Jews too, in an attempt to use our community as a proxy for their hate.

In 2015, Britain First offered “solidarity patrols” in parts of London with significant Jewish population, which was rejected by the community.  Dave Rich, of the CST called them a “far-right, nasty, racist group that intimidates minorities, especially Muslims,” adding that the “Jewish community should and will not have anything to do with them”.

They’re not a nice bunch.

So, Trump’s re-tweets are worrying, not just because he’s the president and should know better, but for Britain, we don’t want to see the likes of Britain First on our streets.

It was not long ago that member of parliament Jo Cox was murdered. She was stabbed and shot by Thomas Mair, who reportedly shouted “Britain First” or “put Britain First” as he killed her.

Following her murder, the group linked to Mair, National Action, was proscribed as a terror group. Shortly after that, Louise Haigh MP called for Britain First to be proscribed too and this led to her receiving death threats, as she described in a Commons debate:

“On Friday, an individual went through every one of my YouTube videos and said he would not rest until I was murdered. If that is not evidence that Britain First should be proscribed as a terrorist organisation, I am not sure what is.”

This is not a group the leader of the free world should be involved with, let alone endorse and give publicity too.

After his retweets, Fransen responded by thanking Trump: 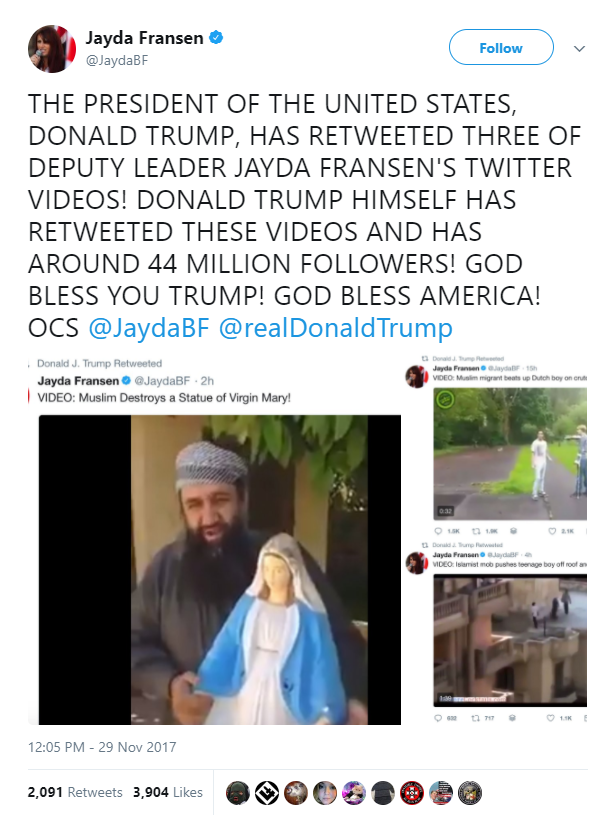 His actions directly and actively invigorate those who share far-right ideology, which in the U.K. can be illegal (incitement.)

They’re trying to become mainstream. And across Europe, far-right parties and aren’t just making noise (though they are doing that), they are challenging for power too.

In America, Donald Trump’s election has been the green light for extremists to come off the dark corners of the internet, and onto the street.

There was a series of ‘Unite the Right rally’ events last year which featured KKK and neo-Nazi sympathisers, particularly in Charlottesville. A protester and two state troopers were killed.

It’s not just some flippant or trivial issue that stays on the internet.

Extremist politics is trying to become part of conventional politics, and his implicit support for Britain First fuels that.

It’s not a game when you’re the most powerful man in the world, and there could be real repercussions of his normalisation of racist politics, if they feel emboldened to act.