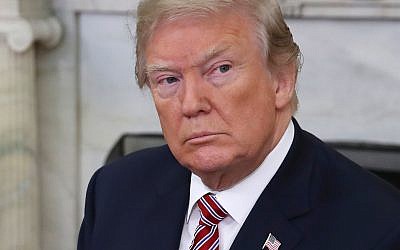 Let me start with a disclaimer: the unauthorized and non-verbalized yet Trump’s ideas that I am going to describe here has come to me not from Trump himself – they have come to me from the Somebody who is above Trump himself.

What is the Jewish interest?

Yes, we are making money, some of us are separated from the others and most of us cherish the democracy. However, we consider all that as the tools in strengthening the Judeo-Christian realm and in it – fostering the Jewish interest. In more concrete terms, it comes down to the following: preventing the Progressives’ morality from replacing the Judeo-Christian morality; creating an educational network of Jews and Christians teaching the wrongs of anti-Semitism; expanding spiritual, economic and scientific relations with the State of Israel; having the Arab countries establishing normal relations with the State of Israel.

Thus, if that is true that American President Donald Trump is considering the world strategic realignment, what it might be and how it affects the Jewish interest?

Why Donald Trump may be considering the strategic world realignment?

The need for a new strategic realignment is based on the realization that the existing after-WWII alignment aimed at defending the Western democracies from the military assaults of communists-alike nations and at assisting the dictator-ruled nations to become the democracies is not working anymore: the enemies of the past have changed, nowadays the Western democracies are threatened rather spiritually – not militarily, and the dictatorial non-Western nations have demonstrated their strong adherence to the government-tsar tradition.

The new Russia, the Russian federation, is not a modified version of the Stalin’s murderous Soviet Union – it is more like a modern version of the former Russian monarchy under the Tsars. The chief goal of the new Russia is to solidify, strengthen and (of course) expand the Russian civilization, as it is defined by the current Russian “tsar” Putin, in competitive but mutually beneficial collaboration with the Western civilization – not with the goal to defeat it as was in the Soviet times. The new Russia wants to advance its interests by its military strength and economic collaboration with the West – not through military confrontation. The new Russia has proved the American sanctions do not work as intended. The sanctions forced Russia to create its own agriculture and stop buying agricultural products abroad. The sanctions helped the Russian government to solidify for its population an image of the external enemy (the USA) who is trying to humiliate their nation – it helps the Russian government designate more money for the military and create more anti-American alliances. It has not created the discontent in the Russian society and has not forced the Russian government to change its policies.

The new China is not a modified version of the Mao-Zedong’s murderous China – it is more like the contemporary Russia with a similar goal to strengthen and possibly expand the Chinese civilization in their own definition – not with the goal to defeat us. They are doing all that by obtaining our technologies and know-hows (legally and illegally) and shaping our economic collaboration to their advantage. The new China, like the new Russia, wants to advance its interests by its military strength and economic collaboration with the West – not through military confrontation. And the new China would resist any Western interference into their internal affairs intended to infuse the Western concepts of human rights and social justice into the Chinese social realm – China has its own concepts on what is right and wrong.

The new Saudi Arabia, the most powerful Arab nation, is not trying anymore to eliminate the state of Israel as an infidel in the Arab midst – the new Saudi Arabia has realized it is impossible and even detrimental to the wellbeing of this nation. The new Muslim Saudi Arabia has realized there is a true her enemy and this enemy is Muslim Iran, and only reliable way to restrain this enemy is the collaboration with the USA and Israel. The new Saudi Arabia, like the new Russia and China, would resist any Western interference into their internal affairs intended to infuse the Western concepts of human rights and social justice into the Arab social realm – Saudi Arabia has its own concepts on what is right and wrong. The bloody Khashoggi affair is a result of the power fight between various families in the Saudi King’s court – of course, we do not like it but … this is their historic tradition.

The new Turkey is much worse to deal with since its president-sultan Erdogan transformed this country from a democratic one maintaining good relations with Israel to an Islamic enemy of Israel. However, is a very powerful country in the Middle East and therefore her interests must be addressed.

The new European Union is losing, or maybe has lost, its spiritual foundation – they are on the way to the Progressives’ utopia mixed with a peaceful Islamization. They are concerned with the internal problems and do not have any time to think about any strategic realignment.

What is a probable Trump’s world realignment?

Stop sanctioning various countries for violations of “human rights” or “corruption” or “brutality” or something else as all that is defined in America and in the Western civilization. In many other countries all that is considered as an assault on their established public order.
So, what to do? Probably, to create new strategic alliances with each country in the above, first of all with Russia and China, based not on the sanctions but rather on the economic and spiritual interests of those countries, based on the respect of the unique governing traditions of each country, based on the defined areas of the exclusive influence of each country and the areas of mutual influence, while maximizing the economic benefits for our own country and strengthening our own strategic leadership.

How the probable world realignment may affect the Jewish interest?

This strategic realignment might be of the true Jewish interest as described in the above since it is based on respecting the traditional moralities of different people; on restoring our own Judeo-Christian morality based on the Torah/Bible guidance; on acknowledging the right for all to manage their own internal affairs along the lines of their historic traditions; and on normalizing the Arab-World relationships.

About the Author
Vladimir Minkov graduated from the Naval Engineering Academy in the former Soviet Union, served in the Soviet Navy and there received his Ph.D. At the end of 1970s he immigrated to America where democracy and the Judeo-Christian spirituality of this country made it possible for him to actively defend both his scientific and spiritual ideas. In the USA he has found the place for his scientific public work in the spiritual realm of One God and Torah.
Comments