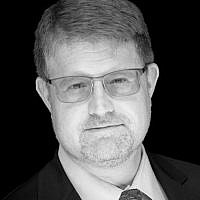 The Blogs
Shawn Landres
Connecting people, ideas, and resources - occasionally all three at once
Apply for a Blog
Please note that the posts on The Blogs are contributed by third parties. The opinions, facts and any media content in them are presented solely by the authors, and neither The Times of Israel nor its partners assume any responsibility for them. Please contact us in case of abuse. In case of abuse,
Report this post.

As early voting hits its stride, Jewish Americans who cast their ballots for former Vice President Joe Biden and Senator Kamala Harris are in good company. According to the latest pre-election polling by the American Jewish Committee, 75% of respondents intend to vote for Biden and Harris, while only 22% said they prefer President Donald Trump and Vice President Michael Pence.

But that’s only part of the story. Voting itself—the right to cast a secret ballot safely, without interference, and for that ballot to count—has been of profound importance to Jewish Americans since the dawn of the Republic. We have fought against religious and racial tests alike, and we have stood shoulder to shoulder with Black, Hispanic, and Asian Americans and with countless immigrant communities of all backgrounds and faiths, to ensure our right to be heard.

In these final days before November 3, Jewish American voters are watching with concern as cynical operatives leverage power to suppress the vote and undermine our democratic institutions even as countless political and community leaders work tirelessly to make sure every eligible voter can cast a ballot and trust that it will be counted. One presidential candidate actively promotes suspicion and division; the other candidate seeks unity and trust.

The question of trust is why the AJC poll matters. On every major issue of importance—including strengthening U.S.-Israel relations—American Jewry overwhelmingly trusts Biden more than Trump. We need not choose between standing up for Israel and representing our community’s values of tikkun olam, welcoming the stranger, and lovingkindness.  By substantial margins, Jewish voters simply trust Joe Biden more: whether on Israel, dealing effectively with Iran, and fighting antisemitism, or handling COVID, uniting the country, and handling crime.  While support for Israel remains strong among Democrats, Republicans, and independents alike, the AJC’s nonpartisan survey also highlighted that we primarily are concerned with the state of our Union, and we are voting accordingly. Our community trusts Joe Biden, because he has faith in America and in us.

We, and Joe Biden, know that trust begins with health and security. Like most Americans, Jewish voters have strong opinions about the President’s unforgiveable response to the COVID-19 pandemic, which has claimed nearly 230,000 American lives—more people than were killed in combat during the American Civil War. We worry about our parents’ safety and our children’s future in a post-COVID world and how we will recover from months of rampant unemployment and economic disruption. We want a president who himself trusts the scientific expertise we will need to build back our new normal.

Trust is about which candidate knows, as Joe Biden does, that “no one should fear for their rights, their freedoms or their lives because of who they are.” Since 2017, while President Trump has stood idly by (at best), antisemitism has become a life-or-death issue. For the first time on American soil, white supremacists have murdered Jews mid-prayer—twice. Antisemitic assaults are proliferating nationwide. It’s no surprise, then, that little more than a fifth of American Jews have any trust in the incumbent to address antisemitism, while 75%—more than three times as many—have confidence that Joe Biden will combat anti-Jewish hate and 72% trust Biden to do a better job of handling crime overall.  And this is not just about us: amidst our long overdue national conversation about racial injustice, 79% of Jewish voters believe Joe Biden will be better at uniting the country. We know that a Biden-Harris administration will ensure public safety and pursue justice for all.

What else—or whom else—do Jewish American voters know and trust? Joe Biden: senator, vice president, and mensch. We recognize his decades-long record of constructive partnership with every Israeli prime minister since Golda Meir.  While senator, Biden chaired the Senate Foreign Relations Committee, championed Israel’s qualitative military edge, and stood firmly against efforts to delegitimize Israel at the United Nations.  As vice president, he helped Israel secure an unprecedented $38 billion commitment of U.S. defense assistance, including the Iron Dome, David’s Sling, and Arrow 3 defense systems. He will continue to pursue a two-state solution while standing firm against attempts to delegitimize Israel, and, most importantly, in his own words: he will “never play partisan politics with the U.S.-Israel relationship.”

If “the Jewish story is the American story,” as Joe Biden says, then that story is one in which everyone, and every vote, truly matters. It will take more than a day or a week to ensure our votes will be accepted and tallied. But we know there is one candidate who wants every voice to be heard. For Jewish American likely voters, Biden is our preferred choice by a landslide. In a time of economic, social, and political uncertainty, our community believes that he and Kamala Harris have what it takes to build back a country reeling from economic disaster, inadequate healthcare, and a devastating pandemic, and to remind us and the world that every American counts.

About the Author
Shawn Landres PhD is an award-winning Jewish community leader and experienced municipal commissioner widely recognized for his work to restore public confidence in government as well as for his leadership and groundbreaking research in social innovation and charitable giving.
Comments