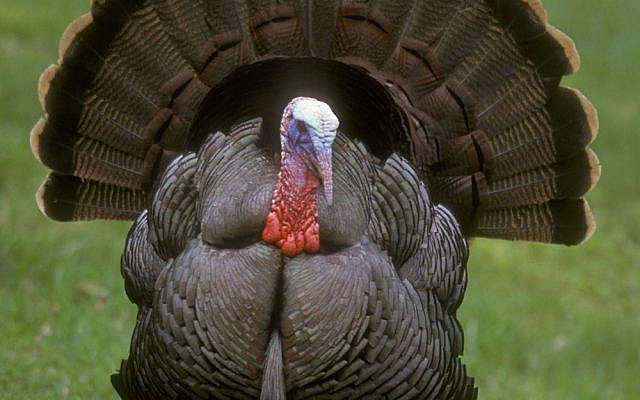 Once upon a time the turkey was a magnificent bird. Benjamin Franklin thought it a far better bird than the bald eagle. He wrote in a letter to his daughter, “For my own part I wish the Bald Eagle had not been chosen the Representative of our Country. He is a Bird of bad moral Character. He does not get his Living honestly.” He continued, “a much more respectable Bird, and withal a true original Native of America…He is besides, though a little vain & silly, a Bird of Courage.” Since 1942, a brand of Kentucky bourbon whiskey has been known as “Wild Turkey” with a picture of the proud bird adorning its bottle.

Yet today’s turkeys that are farmed and fed to the nation are bland, white and stupid. They have a reputation for drowning in a rainstorm because they leave their heads up to watch the raindrops. They look ridiculous and their “gobble gobble” sound is even worse. And they are no longer able to breed without human intervention.

How did the majestic wild turkey turn into the bird stuffed and eaten on Thanksgiving?

Let’s begin in the 18th century with Robert Bakewell. Bakewell was born in Dishley (near Loughborough) on May 23, 1725. His father (also Robert) was known as, “‘one of the most ingenious and able farmers of his neighborhood.” But with hindsight, his greatest contribution to the history of farming was allowing his son to travel throughout England, Ireland and Holland to learn about agriculture. 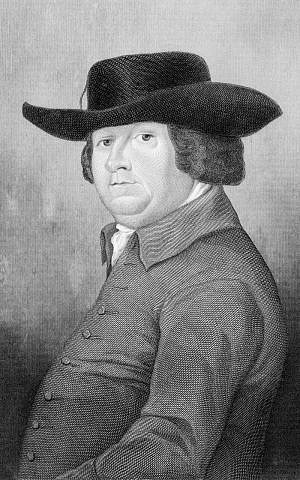 Blakewell (the son) inherited the 450-acre farm in 1773 on the death of his father. The farm had varied crops, including wheat, corn, turnips and cabbages. But Blakewell’s genius was in breeding animals.

At first, he worked to improve his stock of horses, cattle and pigs. But his ultimate success was in creating new, better breeds of sheep.

This was many decades before Gregor Mendel’s experiments with pea plants led him to discover the principles of genetics, and many years before Charles Darwin was born.

Until this time, breeders thought that the babies were influenced by what the parents saw at the time of conception (similar to the technique Jacob used when he bred Laban’s sheep). Or, following Plato (Republic Book 5), they thought the most important factor was the age of the father. Or that only one parent transmitted biological material to the offspring. Many farmers thought that the environment was the most important factor, leading them to slaughter the best animals which would fetch the best prices at market, and leave the weaker animals for breeding. Some cared mainly about the color of the animals.

More importantly, nobody kept records, so there was no way of empirically testing all these theories.

Bakewell changed that. He separated males and females, and carefully selected breeding pairs. He kept records of his animal husbandry. And he also kept records of things such as wool yield, meat quality and speed of maturity. His pupil George Culley wrote in 1771 that those:

that make themselves the soonest fat, were always most esteemed by himself, but are now liked by other people, that they now do not pay so much regard to horns, hydes, legs, &c. &c: but those are accounted best, that pay most money for their keep, that such as are descended from the best kinds generally prove best, but good backs, hips, form of the ribs, shoulder . . . &c. &c. are w[ha]t he [Bakewell] calls Essentials.

Bakewell believed that through selective breeding, animal stock could be improved. And he succeeded. He created the New Leicester breed of sheep, which were big and delicately boned, had good quality fleece and fatty forequarters. He also created a new breed of Longhorn cattle which produced a higher meat yield.

Darwin cited Bakewell in his 1842 “Sketch on Natural Selection”:

Remember how soon Bakewell on the same principle altered cattle and ⁠Western⁠, sheep carefully avoiding a cross with any breed.

In 1844, in ““On the tendency of species to form varieties; and on the Perpetuation of Varieties and Species by Natural Means of Selection” Darwin again referred to Blakewell:

Let this work of selection on the one hand, and death on the other, go on for a thousand generations, who will pretend to affirm that it would produce no effect, when we remember what, in a few years, Bakewell effected in cattle, and Western in sheep, by this identical principle of selection?

Following Bakewell, breeders gradually came to understand the best ways to develop new breeds that would best suit their purpose.

In the mid-19th century, kennel clubs were established, leading to the development of many new breeds. Stud books registered lineage and gave animals purebred status.

By the 1920s Americans wanted more protein. And by 1945, when World War II had ended and GIs were returning home, there was a greater demand for meat than ever before.

The Great Atlantic and Pacific Tea Company was, despite its name, the largest poultry retailer in the United States. Known as A&P, the company, in partnership with the USDA, sponsored a contest to produce the “Chicken of Tomorrow” – a new breed of chicken that would grow bigger, faster, and produce the kind of meat that people wanted to eat. 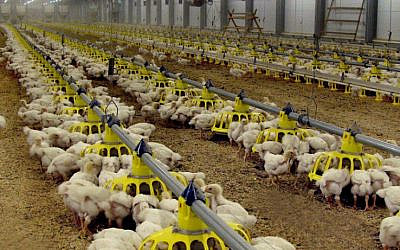 Many Mom and Pop retailers had been forced to close as A&P muscled in with their lower prices and high volume. So the “Chicken of Tomorrow’ was also about rebuilding the reputation of A&P.

Farmers from across the country took part in the contest. They sent their eggs to regional centers, where they were incubated and hatched. When the birds were 12 weeks old they were slaughtered, and the meat was judged on both quality and quantity.

The state and regional contests took place between 1946 and 1947. The final 40 finalists competed in 1948 and Arbor Acres White Rocks won the purebred category. These birds beat the Red Cornish hens into second place. Though soon, the two breeds were crossed, to create today’s chicken.

Similarly, the Beltsville Agricultural Research Center took the wild turkey and created the Beltsville White in 1934. This bird had more breast meat yet was small enough to fit into an icebox. It had pale flesh, which people saw as more appetizing than its predecessor, the Broad Breasted Bronze turkey. 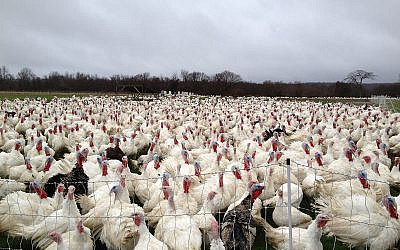 And the Beltsville White in turn, was bred into the Broad Breasted White turkey that dominates the market today. This bird develops quickly – females are slaughtered at only 14 weeks old, males at 18 weeks. It is an enormous bird that gives more meat than any other breed. True, it tastes bland compared to the wild turkey that the Pilgrims may have eaten, but it can be farmed cheaply and people buy them in vast quantities.

Because of the selective breeding, the birds often have joint problems, cardiac issues, skeletal weakness, and a limited immune response to pathogens. They are raised in vast quantities in tiny spaces. The turkey’s breast is so large that it is unable to reproduce naturally.

But Americans eat over 250 million of them every year. As a result of readily available meat, the US consumes 10 or 12 times as much meat as the average person in Mozambique or Bangladesh. They also eat almost twice as much as most people in other Western countries.

It seems that we don’t care where our meat comes from, or how it is produced. Many people feel repulsed when they see the conditions in which poultry and animals are bred, raised, slaughtered and packed. But all that really matters is that we have plenty of it and it is cheap so that we don’t have to work too hard to get it.

The Rabbis harshly criticize Esau for his behavior in this week’s Torah reading of Toledot.

He comes home tired from the field and all he wants to do is eat. Genesis 25:30 states that Esau tells his brother Jacob, “Pour into me some of this red stew, for I am tired.”

Rashi notes the word “pour” is an unusual way of describing eating. He cites Bereishit Rabba which says that Esau said he would open his mouth and just let Jacob pour the stew in. He didn’t care about the taste or the preparation. He just wanted the most food for the least effort.

Jacob realized that Esau’s behavior was not appropriate for him to be the future of the Jewish people, so he demanded Esau’s birthright in exchange for the food. Esau responded, “I am going to die, why do I need this birthright?” (Genesis 25:32). Esau only thought about the present. The future was irrelevant.

Unfortunately, too many of us today act similarly to Esau. We want the quickest, cheapest food with minimum effort. And we have no concern for the future. So what if the earth will soon become uninhabitable because of our eating habits? All we care about is right now.

Jacob bought Esau’s birthright because he looked to the future. He knew that hard effort would pay off in the long term. And he understood that living and eating just for the moment is not a realistic way to live.