Recently there have been press reports of Turkey establishing Uyghur settlements in Syria.

MEMRI TV translated a video from Beirut-based Al Mayadeen of how the Chinese militant group, Turkistan Islamic Party (TIP), is setting up training camp with their families, along with a new colony of 3,500 Uyghurs in a nearby village. This was also reported in September by another Arab source.

The video showed TIP flag flies in Jisr al Shughur in Idlib province that was just taken from Assad forces back in April, and noted that “after the raid, this Syrian city looks more like China than Damascus.” 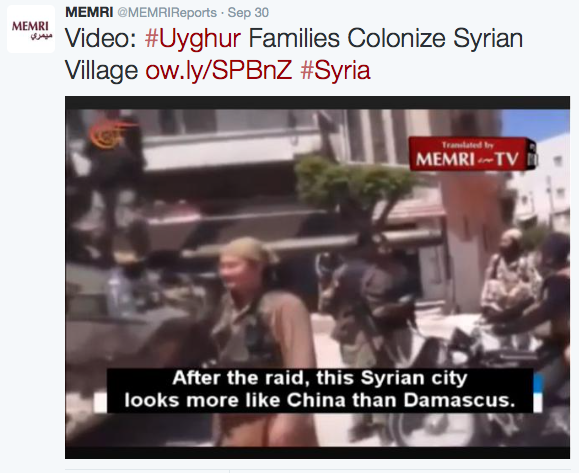 The video went on to say that “thousands of Chinese turkistanis” fleeing China were resettled in the area especially in the village of Zanbaq, and that Syrian demography is being targeted.

Here Al Mayadeen needs a word of exposition. It was established as an alternative to Qatar’s Al Jazeera and Saudi Arabia’s Al Arabiya reflecting Sunni Muslim viewpoints, and appears to be supportive of Assad. Nonetheless, while the exact number of Uyghurs residing in these camps and villages is unknown, other sources corroborate that TIP has indeed set up training camps in Syria and intends on eventually taking jihad back to China.

TIP released photos and videos of itself as a key player in the battle of Jisr al Shughur in April. Along with al Nusra in the Turkey-backed Army of Conquest, TIP has risen to prominence within the anti-Assad coalition and played a key role in defeating the Syrian army in Idlib earlier this year.

Its “Syria branch” spokesman Abu Ridha al-Turkistani. released videos of how he led fighters to take over a building, and climbed a clock tower to plant a black-and-white Jabhat al Nusra style flag on which “Turkistan Islamic Party” was written in Arabic. This flag planting was also showcased in the MEMRI video.

In September, Los Angeles Times reported that TIP and al Nusra captured the Syrian airbase Abu Duhur in Idlib and proceeded to execute 56 Syrian soldiers. With Al Qaeda in the mix of the Army of Conquest, LA Times cautioned that while “the Turkish government is a key backer of various Syrian rebel factions…hard-core Islamist groups now dominate the opposition forces fighting to oust the government of Syrian resident Bashar Assad.”

The Long War Journal later reported TIP photos  of its newly captured arsenal including MIG fighter jets as well as other advanced weaponry. Abu Duhur is a strategic airport about 35 miles southeast of Aleppo, and the last major government garrison in Idlib province.

TIP also released photos of its little jihadist “cubs” in Syria,  in parallel with the MEMRI video noting ISIS likewise recruited Uyghurs from Turkey, and settled them in Raqqa with jihadist cubs attending the schools of Abu Bakr al Baghdadi.

Terrorism Monitor noted in 2012, TIP fighters and their families in Syria were estimated to number 1,000, but with the steady stream of Chinese Uyghurs entering Syria via Turkey the past three years, the number now is likely higher.

Which brings us back to the China-Turkey tug-of-war over repatriation of Uyghurs in July. Since early this year, China Matters has been following the scandal of fraudulent Turkish passports showing up in the hands of Uyghur refugees. In April Today’s Zaman exposed how more than 100,000 fake Turkish passports were produced to assist fighters to join Syrian jihad, with each passport sold for $200.  It claimed more than 50,000 Chinese uyghurs came to Turkey via Thailand and Malaysia before proceeding to Syria.

While 50,000 may perhaps be an exaggerated number, since 2012 China has indeed been complaining of illegal immigration of Uyghurs to Syria. There was a flare up in China-Turkey relations over this issue in November 2014, when Beijing accused Ankara of promoting “illegal immigration” for Uyghur refugees caught in Thailand, which again culminated in Turkey’s violent anti-Chinese protest in July 2015 over the repatriation of Uyghurs to China.

Indeed over the years anti-Chinese and anti-Turkey rhetoric have been escalating in both the AKP as well as Chinese Communist Party mouthpieces. Beginning in 2009 when Erdogan called China’s Xinjiang crackdown as “genocide” and Beijing responded by naming Turkey an axis of evil, since eruption of the Arab Spring in 2011, Beijing has been issuing warnings to Turkey to crack down on Uyghur militants transiting its territory to train with Syrian jihadists. Titles like “War with Syria would be great mistake for Turkey”, “Take fight to ETIM before threat grows”, “Turks, Uyghurs held in smuggling, terrorism scheme”, “Turkey’s ambiguous policies help terrorists join IS jihadist groups” and “Turkey must distance itself from terrorists” abound.

With TIP’s increasing attacks on civilians in Chinese territory in 2013, and 2014, including the suicide bombing in Tiananmen Square, in early part of 2015 Chinese government officials including top intelligence bureaucrats traveled to Ankara to raise their concern regarding the illegal trafficking network of supplying Turkish passports to Uyghurs for jihad.

However, their pleas seem to be unheeded, prompting Chinese officials to finally come out publicly on this issue.  In July Tong Bishan from Ministry of Public Security said “Turkish embassies in Southeast Asia will give them proof of identity,” and once the Uyghurs arrive in Turkey they are sold as “cannon fodders” for $2,000 per person to extremist groups.

Reuters later interviewed some of the Uyghur refugees who confirmed they were given ID papers by Turkish embassy in Malaysia, after they were smuggled through Cambodia, Vietnam and Thailand.

China-Turkey relations in the shadow of Uyghurs

In 2010, understanding Uyghur is a hot button issue in Sino-Turkey relation, then President Abdullah Gul tried to improve ties with China and established a strategic partnership, as well as a mile stone joint air combat exercise in Anatolia. Xinjiang was designated as a friendship bridge, and Ankara hoped improving ties with China with support for the “One China Policy” would lead to better conditions for the Uyghurs.

However, after eruption of the Arab Spring and Erdogan’s Islamist agenda in Syria made an about face towards China, the misguided policy of recruiting fighters to topple Assad once again propelled Uyghur issue to the forefront of bilateral relations. By deliberately stoking China’s fear about increasing radicalization, thereby provoking Beijing to clamp down on Uyghurs and prompting their exodus to Turkey to join anti-Assad rebel groups in Syria, Abdullah Bozkurt of Today’s Zaman criticized Erdogan is actually exploiting the ethnic Uyghurs’ plight for his narrow Islamist agenda.

Others share this view. Peter Lee of China Matters in February disclosed the plight of Turkey’s 2,000 Chechens where private appeals to join jihad are backed up with government resource of threatening deportation. He cited an AI Monitor link revealing how “though Turkey tolerates the Chechen refugees, many lack residence permits and live in destitute conditions under a constant risk of deportation…this life in limbo led many Chechens to acquiesce to blackmail-like pressures to join the Syrian war.”

Lee observed how Turkey providing exiled Chechens as cannon fodder for its Syrian adventure might equally exploit the impoverished and desperate Uyghurs. The Chechens were coerced to join jihad or face deportation which would mean certain death, and “Individuals who were personally the subject [of such pressure] recount confidentially how certain people would come to convey them this message.”

This policy thus prompted Abdullah Bozkurt of Today’s Zaman to accuse Erdogan and Turkey’s Islamists of betraying the Uyghurs for its “misdirected cause.” And as Erdogan continues to stoke sectarian, religious, and ethnic strife by warring against Assad and Kurds; backing jihadi proxies that massacre Syrian Christians and Druze; arming Chinese and Russian militants that attack their homeland; goading US and NATO to be a cover for his misadventures—it looks as if Syria would descend into further chaos.

Now Beijing is being drawn in as Erdogan-backed TIP continues to gain power in Syria to attack China. Beijing has now signaled it would join the fight against ISIS and other Islamic extremists under a UN banner.  Besides damaging Sino-Turkey ties, in twisted irony, after years of adhering to a long-standing non-interference policy, Erdogan may in fact be credited as the one who finally provoked the Chinese dragon to abandon this policy in the Middle East.