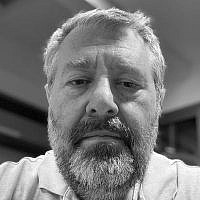 The Blogs
Andrew Besser
Apply for a Blog
Please note that the posts on The Blogs are contributed by third parties. The opinions, facts and any media content in them are presented solely by the authors, and neither The Times of Israel nor its partners assume any responsibility for them. Please contact us in case of abuse. In case of abuse,
Report this post.

As with all Jews, I have been trying to make sense as to why two of our most joyous days, Lag Ba’omer and Yom Yerushalayim should end up in such tragedy, one with the sad passing of 45 Jewish souls and the other throwing our beloved Jewish country into a state of warfare.

The answer that this is Hashem’s way is unsatisfactory because Hashem doesn’t act randomly. We know, as his people, what he expects from us. I believe we (and our religious leaders) therefore need to introspect, not from a sense of blame, but to try and understand what is expected of us and to know that we are doing our best.

I have concluded that for me the issue is around boundaries in behaviour.

It cannot be coincidental that these events have occurred during the period of Sefirat Haomer where we count the days from Pesach to Shavuot. We were constituted as a people when we left Egypt on Pesach, but we left with no rules or definition. The days of the counting, in the desert, on our journey from Egypt to Mt. Sinai, were our preparation to receive the Torah on Shavuot. The Torah defines us and our behaviours and sets out the boundaries of how we are expected by Hashem to live our lives, both communally (bein adam lechaveiro) and also religiously (bein adam lamakom).

The Torah instructs us in our ritual as well, how we should serve him, (in earlier days) through sacrifices (Korbanot)), the festivals etc., among other commandments. It also tells us that we shouldn’t do more or less than these instructions. (Devarim 13:1) – “Be careful to observe only that which I enjoin upon you: neither add to it nor take away from it (the bal tosif rule).”

This translation is interesting as it shows as an entreaty from Hashem, rather than just a commandment. It also contains a warning to be careful, implying a direct consequence. This is textually unusual.

We understand from many interpretations of the sad story of Nadav and Avihu (Vayikra 10), the two sons of Aaron who were consumed by fire for bringing “strange fire” into the Mishkan, that they were not acting in a ill way, but in an overexuberant way, trying to serve Hashem in a way other than, and in excess of, the way Hashem had wished.

There are many discussions of the practical effects of the bal tosif rule. Interestingly, a lot of these conversations related to the adding of extra festivals and whether these should be permitted and if permitted, how they should be observed.

And here is where I see an area for contemplation. In my view, the celebrations of Lag Baomer and Yom Yerushalyim are ill-defined.  Neither is a Chag in the true sense, there is no independent mitzvah, no sanctification (no Kiddush), no shecheyanu bracha, no kriat hatorah, even no agreed form of prayer in the  siddur.

In the case of Lag Baomer, is the annual behaviour at Meron really proportionate? Do the celebrants really know why they are there? Is this a tzanua (modest) way to behave? Are they behaving in a courteous way to each other? The answer, I am afraid, is no. Ironic, bearing in mind that the reason Rabbi Akiva’s students died, was that they did not show each other respect or possibly displayed disrespect.

In the case of Yom Yerushalayim, commemorating and celebrating a great event in our lifetimes, maybe even a miracle, (although noted that we don’t say a version of al hanisim or the bracha sheasah nisim), and for those who have that view, it is still only REISHIT tzmichat geulateynu, the beginning of the redemption. The job is not yet done. We do not have our third bet hamikdash yet. Is the level of celebration proportionate, compared with say Shavuot or Simchat Torah? Is this a tzanua (modest) way to behave? Are we behaving in a courteous way to each other and to those who live among us? Is our behaviour a Kiddush Hashem or a Chilul Hashem? We know the answer, I fear.

Do we acknowledge that there were losers too from our capturing of Jerusalem. Were we conscious of these sensitivities at the time of Ramadan?  We restrict our Hallel on Pesach because of the death of the Egyptian soldiers of Pharoah at the Red Sea.  Could our excess of celebration lead to an excess of hatred?

As I write, we are in shelters and maybe too emotionally charged to think rationally .

But these days will come around again next year. Before then, there will enquiries and reports and accusations about both events. In the meantime, let our religious leaders set some boundaries around these days, boundaries of tzniut, boundaries of understanding and boundaries of tefillot, so that we can all be wiser, safer and happier in our celebrations.

About the Author
Andrew Besser is a modern Orthodox Jew, a commercial lawyer by trade, enjoying the challenges of making sense of Orthodox Jewry and Israel in the modern world.
Related Topics
Related Posts
Comments