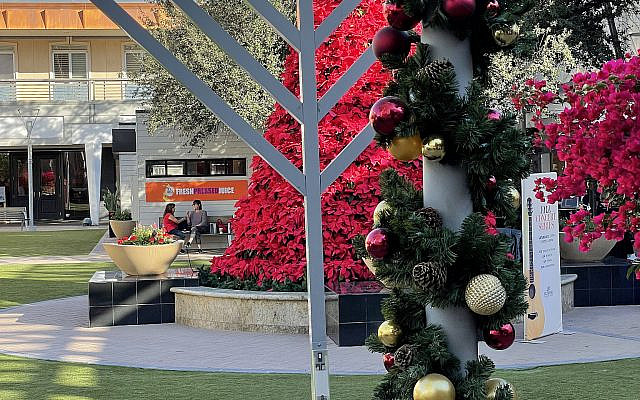 My neighbor gaily calls out as we pass each other walking our dogs.
Her gracious home is beautifully adorned, trees strung with twinkling white lights, lamp posts festooned with dark green garlands, the scent of pine in the air.
And I am touched by her greeting amidst the Christmasy splendor.

She must have glimpsed the electric menorah in our front window, one candle lit for each night. Or she noted that our home is the seemingly lone outlier on a street where most of the homes are bedecked for Christmas. So the cheery greeting, recognizing the difference in our holidays, and wishing me well on mine, made my day.

And it got me thinking again, about this holiday season, about what we share, and what we don’t.

I’m thinking about how religious belief springs from universal human yearnings for health, for happiness, for prosperity. How much of it comes from common purpose, to make the world a better place, to inspire, hope, love, and create peace. And how much of it reminds of our obligation to care for others, to give of ourselves, to shine a little more light to dispel life’s darkness.

The two holidays, Hanukkah and Christmas, both come as winter approaches, as the days shorten, as light ebbs, as nights with velvety star studded skies grow longer. And so it is that they both offer light-filled messages of faith and its promise.

There is the Christmas story of Christ’s miraculous birth, of the three wise men bearing gifts and the bright star that guides their way. There are Jesus’ teachings that bring comfort, his persecution at the hand of the Romans, his tortuous end on the cross and ascension to heaven.

The Hanukkah story tells of the Jews also persecuted for their beliefs, who refuse to compromise at the behest of their Greek overlords. It recounts the desecration of their holy temple and the miraculous vial of oil that was recovered to light the sacred menorah for eight days. It retells the final battle won to then assure their religious freedom.

The resonances are evident, but the history differs, the rituals are distinct, the meaning particular to each tradition.

And the tendency to conflate one holiday with the other, to celebrate shared values without recognizing their uniqueness misses the point.

Hanukkah is not the Jewish Christmas – nor its inverse — and as much as the holidays come at the same time of the year and are marked by joy, celebration and gift giving, they are not the same.

And yet, perhaps, that is precisely the point for us, living in a country founded on the revolutionary principle of freedom of religion, of the right of free exercise and the prohibition of religious establishment. Living in a land of immigrants, that has welcomed millions of others from a myriad of religious traditions and struggles to make room for them all.

It was a message that came home to me as the first candle was lit at a community Hanukkah celebration at a local shopping center. A menorah stood sentry over the convivial crowd, men and women kibbitzing, kids gobbling latkes and jelly donuts, faces smeared with sugar, hands sticky with oil, chasing each other across the grounds. And across from the giant candelabra, a striking tower of bright red poinsettias, beribboned pillars adorned with sparkling lights and luxe gold balls ringing the grassy enclave.

Elected officials greeted the throng with messages recalling Hanukkah as the feast of freedom, while a rabbi led the crowd in reciting the traditional blessings over the candles.

And, for me, perhaps, that’s the real meaning of the holiday season, and the warmth I felt at my neighbor’s greeting.

Only in America do we have the freedom to observe each in our own way, each in accordance with our beliefs, each according to our tradition.
And that alone is cause for celebration.