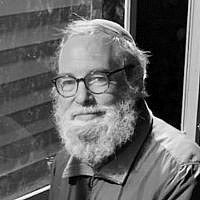 When my father, Seymour Hefter, a”h, passed away in March 2019, I decided to learn some additional Torah material each day in his memory.

My goal was to honor his first Yahrzeit with a Siyum ceremony. Matching the topic of the learning to a salient characteristic of my father seemed an appropriate objective for this study. Given my father’s dedication to davening with a minyan every morning, choosing the topic of Tefilah was first on my list.

I reached up to a shelf of Seforim at home and pulled out my copy of “Halichos Shlomo al HaTefilah”, a sefer assembled by the family and students of the great Rabbi Shlomo Zalman Auerbach, z”tl. 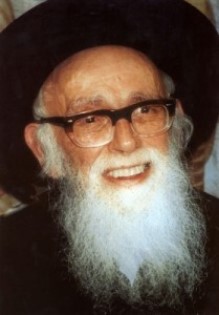 R. Auerbach, one of the greatest poskim/legal decisors of the twentieth century and a life-long resident of the Shaarei Chesed neighborhood of Yerushalayim, passed away in 1995. He published several Seforim during his lifetime; over the last 20 years, his descendants and students have collaborated to bring more of his Torah teachings to the broader Jewish world.

This particular sefer, published in 2000, explores dozens of topics on the subject of daily Jewish prayer including the kavana/focus required for proper praying, many of the core elements of our journey through the daily Siddur service, and ending with the berachot/blessings that we recite on certain special occasions. 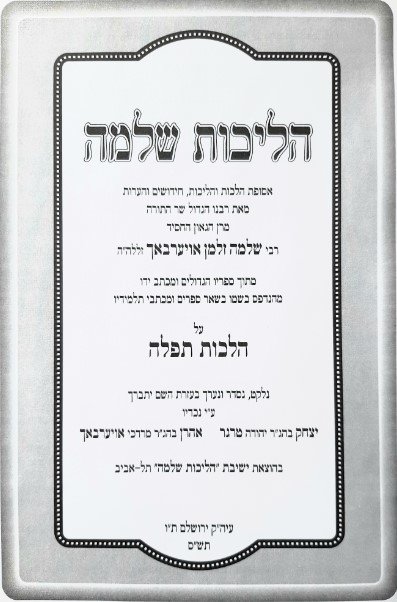 Recently, on the eve of the 20th of Adar, my dad’s first Yahrzeit, I was privileged to make that Siyum and complete R. Auerbach’s sefer. The final topic deals with an interesting question about blessings. We generally finish a blessing with a single idea (think wine, fruit, crackers, lulav, Hallel, etc.).  In these cases, it is easy to mentally focus on the single theme of the bracha when we begin the blessing, during the initial phrases of “Blessed One, You, God, our God, King of the Universe…”

But what do you do when you are faced with a situation where two blessings are warranted — do we merge the endings of the blessings together into one? As an example, if (in an earlier historical age) you found yourself in front of a king of Israel who also happened to be a Torah scholar would you conflate two blessing-endings after the generic blessing-introduction? Would you end the blessing with some combination of “who has shared of his Kavod/Honor with those who are in awe of Him” and “who has shared of his Chochmato/Wisdom with those who are in awe of Him”? And, if so, how would one be able to ably maintain a laser focus on both these different elements of the person while in front of them – on the Kavod and on the Chochma?

Answers R. Shlomo Zalman (Chapter 22, Halacha 42), you recite two independent blessings. While the two blessings share much in common, the dictum of Rav quoted in the Talmud Bavli Berachot 49a applies here – “Ain chosmin bishtayim” — in general, we do not conclude a blessing with two different ideas but give each its independence and unique focus, if even for the few seconds it takes to utter the introductory phrase of the beracha.

R. Shlomo Zalman then discusses several related scenarios to this case including whether to make one or two berachot when using a single piece of food for both an Eiruv Techumin and an Eiruv Chazerot – he leaves this issue as needing more analysis. His last observation relates to the long blessing-endings in our Amidah service of the High Holy Days and he posits that, in those cases, the themes of the endings are so intimately fused as an expression of kedusha/sanctity that they really do belong together. Even on our three Moadim, the common Amidah ending-beracha of “mekadesh Yisrael v’Hazmanim” (who sanctifies the people of Israel and the appointed holiday times) is singularly focused as it is only through the efforts and action of the Jewish people that the lunar calendar is maintained to generate the specific schedule on which our holidays can occur. As such, the ending-beracha presents an encapsulated, singular theme.

Such ends this sefer; but not the story of the Siyum for my father. In preparing the Siyum, I was curious about when R. Shlomo Zalman passed away, as in the actual Hebrew date. 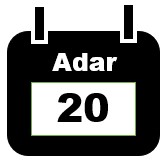 These two men share the same date of passage.

What are the chances that, of all the Seforim that I might have chosen to learn to honor my father and of all the days in the calendar that that author might have passed away, that it would be the very same day as my father and that I was steadily moving towards memorializing both individuals on the same night? I am astounded.

In the spring of 1995, Rabbi Emanuel Feldman, then the editor of Tradition, wrote as part of his eulogy to Harav Shlomo Zalman (in describing the sheer number and diversity in the hundreds of thousands of people who attended his levaya/funeral), “……people were responding to qualities which have grown increasingly rare; genuineness, wholeness, straightforwardness, impeccable integrity – what our tradition calls an ish emet.”

Those who knew my father, a”h, were also struck by his genuine interest in them and their welfare; his career in social work and Jewish communal service spanned over 60 years. He was a man who literally absorbed the flow of Jewish life and practice and shared his passion and love for living and doing Jewish with all with whom he interacted. He loved Eretz Yisrael and he loved gardens and the earth — it is no surprise that he developed a Haggadah for Tu Bishvat and led sedorim on this day for many years. He loved the United States of America – it is no surprise that he developed a Haggadah to celebrate July 4th, Independence Day. He and my mom merited to raise four children who built their own Jewish families both here in the United States and Eretz Yisrael and, over the years, have blessed my parents with many grandchildren and great-grandchildren.

Can I think of these two men, great in many different ways and yet both pure-hearted, calm in disposition, and wholly Jewish-intentioned at the same time? Can I be “chosmim bishtayim”? I passionately believe that, in this case, the non-coincidence of these two Yahrzeits suggest that I can. May we always associate blessing and kedusha/sanctity with their memories, and may their legacies be thoughtfully and consciously lived through their families and those they continue to inspire. Yehi zichram baruch.

About the Author
Jesse, a Ph.D. chemist/materials scientist, originally from Elizabeth, NJ, completed a 35-year career as a technologist at Verizon Communications where he retired as an Associate Fellow. He lives in Brookline, MA , where he attends the Maimonides Kehillah, built and manages the Boston Eruv, teaches a weekly Daf Yomi shiur, serves as the High Holiday Baal Tefilah at Congregation Kadimah Toras-Moshe, and is actively working to complete Semicha through Yeshiva Pirchei Shoshanim. He and his wife, Brenda, are parents to three and grandparents to eleven. He enjoys radio-control modeling, skiing, sailing, and tennis.
Related Topics
Related Posts
Comments