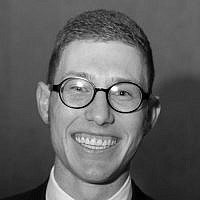 The Blogs
Noah Tradonsky
1st generation Jerusalemite; Old-souled Jew
Apply for a Blog
Advertisement
Please note that the posts on The Blogs are contributed by third parties. The opinions, facts and any media content in them are presented solely by the authors, and neither The Times of Israel nor its partners assume any responsibility for them. Please contact us in case of abuse. In case of abuse,
Report this post.

Tomorrow, at around 10am Jerusalem time, I will stand up from my seat and spend 2 minutes in solemn silence. The people around me will do the same, as we remember the 6 million Jews who were killed by the Nazis. If I am outside, I will likely be squinting because of the spring sun shining in my eyes, and I’ll be thinking that my mom was right when she said that I should always take a cap. But I’ll be thinking about something else as well, something that is much more troubling and concerning and which has plagued me for much longer than the 2 minutes of unprotected radiation. Who cares?

Who cares about the Holocaust? Who cares about the victims? Who cares about our obligation towards them? Their memory? Their individual dreams, ambitions and goals? And I don’t mean “care” in the sense of feeling the pain of another Jew or feeling intricately intertwined in the story of Jewish history – that is of utmost importance but also somewhat ambiguous and vague. I mean, “who cares enough about commemorating the Holocaust such that their grandkids will be inspired to commemorate it too?” And what are they doing that many people around them – myself included – are not?

I need to pause and be very clear for a second. Anyone who knows me knows that I ask these questions from a place of deep and genuine concern. I am very passionate about Holocaust education, and I am very involved with the March of the Living. I became religious through my experience on the March and – in fact – the last time I attended a public Yom HaShoah ceremony, I was speaking on the stage at Auschwitz-Birkenau, delivering the March of the Living 2019 Emerging Leaders Declaration against Antisemitism and Intolerance. I think that educating people about the Holocaust is one of the most important responsibilities of my generation. I believe that it will shape world Jewry – its relationship with and obligations towards its neighbors in the diaspora, the State of Israel, and itself – long after there are no more survivors to share their personal testimonies from the war.

The generation before mine could hardly forget the Holocaust. It shaped them and – in many cases – their connection to Judaism. Holocaust survivors became leaders and visionaries in many communities throughout the world. Many of them, particularly those who became very successful and were inspired to act by their experiences during the war, became founders and funders of schools, synagogues, summer camps and community centers. It was almost impossible for a Jew growing up in a Jewish community not to see the outsized impact of the Holocaust on post-war Jewry and of survivors on communal affairs. Holocaust education was all too relevant. There existed “real-life” survivors, and they spoke of a time only a few decades prior. The iron curtain was still down over half of Europe, and the effects of the war, even as the new millennium began, was obvious. Indeed, for many, the goal of the generation was to teach Jewish children about what happened, what once was and what was lost. And, for the most part, they succeeded. Millions of Jews in the diaspora and in Israel knew about the individuals and the communities that perished. And many developed a very strong bond to their community largely based on their common past of ghettos and gas chambers.

But that did not work as well for my generation, and it will likely be even less effective for my kids. In three generations from now, my grandkids may ask me why Holocaust education even exists as part of their curriculum, or why we stand for 2 minutes of silence in the hot sun once a year in the late spring. More likely, and more troublingly, they may not ask at all. They won’t be inspired to. It will be too distant, too unrelatable. The same way the Spanish inquisition and the Chmielnicki massacres are to me.

And so if we want our kids and grandkids to know why we stand for that siren, it seems that we may have to reframe the discussion. In the past two months, we have celebrated two Jewish holidays – Purim and Pesach. The appropriate parallel, it seems, to Yom HaShoah as a “Day of Remembrance”, is Purim. Both commemorate a one time event in which we – as a nation – underwent a traumatic and almost fatal experience. Both one-time events happened a long time ago, in what seems like a world very different from ours. And in both of those long-lost worlds, the Jews’ socio-political standing – barring a few exceptions – was far less privileged and opportunity-filled than that of Jews today.

Their enemies were different than ours. The Jews’ friends and foes, the extent to which they could help or harm the Jews, and the extent to which they did, seems more extreme and ruthless. We were more dependent on our neighbors. In 2022, we are blessed to be in control of an autonomous Jewish state, something that surely makes us more secure than Jews of yesteryear, and which makes it much harder for us to relate to the Jews of ancient Persia or 20th century Europe who lived by the will and whim of their non-Jewish leaders. We do experience Purim as far more than a day of commemoration, but that is largely due to its status as a Festive day as well as the obligations we have on that day to give extra charity, have a festive meal, and give gifts to friends and neighbors. Those obligations give the day a spirit of camaraderie and fraternity, and are crucial aspects of the day itself. Without such formal obligations, a day of remembrance, even a day of remembrance for an event as miraculous as Purim, would quickly fade into the annals of history. Seeing Yom HaShoah as a memorial day for that which once was will not inspire a new generation of Jews to learn the lessons that the Holocaust can and needs to teach them and which they need to learn.

Luckily, we also celebrated another holiday within the last month. If Yom HaShoah is not the Day of Remembrance, but the Day of Education, the Day of Insight, the day on which every Jew learns the lessons of the Holocaust and how they relate to his or her individual life, how they ought to illuminate his or her own world view; if Yom HaShoah is the day that we internalize that hatred and antisemitism does exist, that there are people who – as I write this – are plotting my demise and the demise of my family and friends, and that we are obligated – as a people who knows all too well the face of destruction and death – to take their threat seriously; if Yom HaShoah is the day on which we learn that values of tolerance and understanding – which coexist alongside values of Jewish pride and a sense of obligation to our people and our God – is not a contradiction in ideals but a delicate global outlook with which the modern Jew must live in order to survive and succeed, then we need look no further than the educational masterpiece that is Leil Seder as a guide on how to transmit these messages to a generation of Jews increasingly disconnected from its past.

In the Hagaddah, the liturgical text that Jews read as they sit around the Seder table commemorating the Exodus from Egypt, the following passage is written: “And regarding the son who doesn’t know to ask, you will open the conversation for him. As it is stated (Exodus 13:8), “And you will speak to your son on that day saying, for the sake of this, did the Lord do this for me in my going out of Egypt… ‘for the sake of this’ means when this (Matzah and Maror) are resting in front of you (ie, on Leil Seder)”. Many commentaries understand that we celebrate the Pesach Seder to commemorate the Exodus from Egypt. But the reverse is equally true – we were taken out of Egypt in order so that we would celebrate the Pesach Seder. The Exodus from Egypt was the necessary preparatory step to enable us to experience and celebrate this, this Main Event, this Leil Seder, when Matzah and Maror are placed before us.

The Seder Night is the ultimate paradigm of how to effectively educate a generation on the meaning and relevance of an event that happened long, long ago in a land far, far away. The story of the Exodus is certainly important in its own right, but equally important is the extent to which we take its lessons and apply them to our own lives. “In each and every generation a person must view himself as though he personally left Egypt.”

Perhaps, going forward, this is the goal towards which Holocaust education should strive. Remembering the Jews who were murdered, the communities that were destroyed, and the world that was lost, is certainly of paramount importance. But for my generation to listen, for my grandchildren to listen, they will need to be taught lessons that are relevant to their own lives. Namely, that evil exists and must be taken seriously, that we – as a people – need to look after each other and should not expect that anyone else will, and that no matter how devastating a situation may seem, there is often a bright light at the end of the dark tunnel. Just to name a few.

About the Author
I am a proud Jew who lives in Jerusalem. After finishing high school in Johannesburg, South Africa, I spent 2 years at Yeshivat Har Etzion, followed by 3 years at Yeshiva University in New York. After graduating in June 2021, I made Aliyah in the hope that I could do my part in helping to settle the Land and make a difference. We can always hope!
Related Topics
Related Posts
Comments