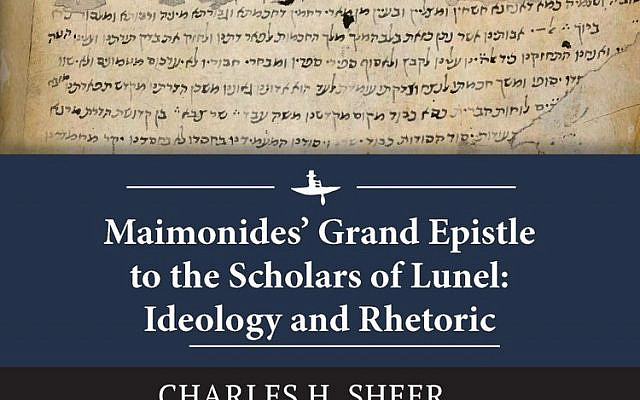 We live in an era of short attention spans, where an in-depth article cannot be read due to “tl;dr.” (too long; didn’t read). The art of patience and the ability to read in depth seems to be a lost art. When Maimonides penned his “Mishneh Torah,” this masterpiece was read in depth by the greatest scholars of the generation.

One group of scholars in southern France, in the city of Lunel, wrote Maimonides 24 scholarly questions. They did not get a response, so they ended up writing a few more letters to him. After the fourth request, Maimonides finally did pen a reply. In the reply was a poem written to the scholars of Lunel.

In “Maimonides’ Grand Epistle to the Scholars of Lunel: Ideology and Rhetoric,” Charles Sheer has written a most interesting monograph that translates and explains this unique poem of Maimonides.

A fascinating part of the poem, as Sheer brings out, is that the poem was both complementary to the scholars of Lunel, while being somewhat of an explanatory and autobiographical account on the part of Maimonides.

With modern technology, it is possible to get real-time answers, even when the parties are worlds apart. The response from Maimonides took several years to reach France. As Sheer notes, Maimonides may never have replied had it not been for a French rabbi who settled in Egypt, who pressed Maimonides to pen a response.

While Maimonides lived over 800 years ago, his poem describes a tension that many of us deal with today—the challenge of balancing work, Torah and other knowledge. His poem, which Sheer so clearly explicates, details his struggles and challenges. Furthermore, Sheer shows that this ancient poem is still quite relevant today.

The Rambam (Maimonides) wrote “Sefer Hamitzvot,” “Mishneh Torah,” “Guide for the Perplexed” and a commentary on the Mishnah. For any one of those alone, he would have had a lasting impact on the Jewish faith. However, with all that, he never wrote a direct commentary on the Chumash. Nevertheless, if one reviews his works, there is easily enough commentary to fill a book.

That is precisely what Rabbi Alec Goldstein did in “The Biblical Maimonides on Exodus.” In this interesting book, Goldstein has created a most useful resource that allows the reader to see how Maimonides interpreted both philosophical and legal passages from the book of Exodus.

While Goldstein has gathered a significant amount of commentary, there are gaps as not every verse is commented on. The author has also added some of his own ideas, in addition to showing how Maimonides differed in his approach to other medieval commentators.

Although he wrote extensively on the topic, it is a shame that Maimonides never left us with a full commentary on the Chumash. Goldstein has traversed through much of the writings of Maimonides and gathered what he did write on Exodus. As we begin the weekly reading this week, “The Biblical Maimonides” is a book you should have by your side for the next 11 weeks.