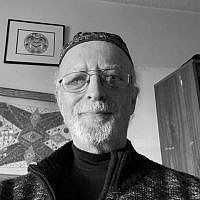 The Blogs
Jay Wax
A face to add kavvanah to words.
Apply for a Blog
Advertisement
Please note that the posts on The Blogs are contributed by third parties. The opinions, facts and any media content in them are presented solely by the authors, and neither The Times of Israel nor its partners assume any responsibility for them. Please contact us in case of abuse. In case of abuse,
Report this post.

“But if you pay close attention you will see that the most masculine man has a feminine soul, and the most feminine woman has a masculine soul.”

In a theological discussion, especially when interacting with the delicate mentalities in the global community, the presentation of evil, as anger and violence would best be left out of the question altogether. Thus an interested reader of theology is likely looking for comfort, healing and peaceful communication. However in this world, religions have very much been interactive with various forms of violence, in dramatic forms, in historical realities, in present day contests for supremacy. An exception is Buddhism, which has kept to a path of ahimsa, non-violence in the heart of the meditation. However Buddhism as it remains has been heavily tainted with the evils of meat eating, lack of vision and a vast conflicting array of schools of thought and practice. My attachment to Tzionism, that is the belief that the Jewish nation is entitled to a country of their own, is largely due to the fascinating and compassionate attempt to merge theology and religion with the practical history and fate of real people. The unfortunate forms in which Tzionism finds expression, particularly in modern day Israel, this year of 2022, is that of any other nation whose history incorporates incredible amounts of suffering inflicted on the native citizens, and also directed on real or perceived enemies. Thus most people in the world forum likely see the struggle of Tzionist Israel as that of any other country, with only token claims to a spiritual identity and fate.

I have come to believe otherwise. Now acquainted with ideas around Tzionism among such noble souls as Rabbi Kook, Z. L. first chief Rabbi of Israel, (among many others), the scientist Albert Einstein and the writer/philosopher Jean-Paul Sartre (focusing more on antisemitism than Tzionism), the later of the mid-1900’s, I believe there is an eternal spiritual force in Tzionism. This vision first revealed to Moshe Rebbeinu on the mountain of Tzion, also known as Mount Sinai has in common the aspirations of the other religious leaders, such as Mahatma Gandhi, Mohammed peace be upon him, and the Apache chief Geronimo. It is important also to keep in mind, that once our mission is complete, god willing, and we join in the world to come, or heaven, the Torah says we will no longer be seen as Jews, that is as a people fundamentally different than any other good people. Ultimately all those inspired will have completed the same mission, though called by different names.

The Torah says god created the world to include the attributes of kindness and mercy as in the name YHVH along with name of justice intended in the name El-heem. Torah commentary says the world will not last or stand with justice and strength alone as represented in the name El-heem. So too Zionism will not stand based on Zayin alone, ז, that is on strength or power but must remember and honor the original versions of Tzion, ציונות, as צִיּ֖וֹן in the Torah, spelled with the Hebrew letter tzaddi and its 2 prongs צ to include multi-diaspora and inter-Israeli diversity.

Similarly Judaism itself also will falter based solely in the name Hashem Eloheem unless we incorporate with the Eternal Love of ChaviYAH as a feminine form of YHVH, as part of the Name Ail YetzirAh ChaviYAH, Yisbaruch Sh’mo.

The so called war of the sexes, that is mainly a history of men having derogatory ideas about women which they put into action in daily life and laws, also extends into our relationship to god in our religious practices. These ways of thinking, as pointed out by the German/Jewish Carl Marx, the economist and philosopher of the 1800’s, first found realization in human institutions with prostitution, whereby women were treated as capital, that is as physical objects to be sold. (Male prostitutes must have existed also, perhaps in small numbers). In corrupt forms of ancient religions, a man could offer a slave or relative to a priest as a prostitute to supposedly get some boon or blessing. Women also at times develop unconditional hatred of men, whether from a history of personal abuse, or an evil inclination. In trying to amend out attitudes toward Tzion and toward god by remembering the feminine aspects, the human race may evolve more strongly toward the correct balance of women and men, and inner femininity and masculinity. A way of thinking from top to down, suggests that as we correct our thinking about our religious and national relation to god, so too the healing will filter down into human everyday life, god willing.

I am introducing this topic with some of the key concepts. I have much more to learn among the many volumes and scriptural understandings of the history and fate of the Jewish people, and our relationships with other noble peoples and enemies. I hope that I have made it clear that Tzionism was never meant to assert an identity of superiority and self-importance, but rather is meant to find fulfillment in common with a world consciousness for the goodness of all earth and heaven bound living beings.

Within the limitations of human thought that necessarily creates duality engendering conflicts and paradox, I will remind us; Sh’ma Yisrael, Adonai Elohainu, Adonai Echad. Here and listen, people of the nation and land of Israel, our god and our Benevolent Master is One and Unique, the Unique One. May god be my Judge.

Note – The modern Israeli Hebrew of using זיון as a curse, is a perversion of the English translation of Tzion, commonly mis-spelled Zion mostly due to the lack of no direct way of representing tzaddi in English. I believe versions of Tzion with the original meaning spelled with the Zayin occurs in the Torah and older Rabbinic commentaries, for Zion to denote the same intent as Tzion.

About the Author
Jay is a 68 year old man from Toronto, Canada of Jewish and Aboriginal ancestry. He is a student of Torah and practitioner of Judaism, in harmony with world faiths. He supports Tzionism as a community member of Times of Israel, along with NGO's in Israel such as Women of The Wall and Women Wage Peace. He is a music composer, artist and writer in a variety of capacities. His works are featured in SoundCloud, ReverbNation and DeviantArt. He also self-promotes his creations on Facebook.
Related Topics
Related Posts