The Blogs
Daniel S. Mariaschin
Apply for a Blog
Advertisement
Please note that the posts on The Blogs are contributed by third parties. The opinions, facts and any media content in them are presented solely by the authors, and neither The Times of Israel nor its partners assume any responsibility for them. Please contact us in case of abuse. In case of abuse,
Report this post. 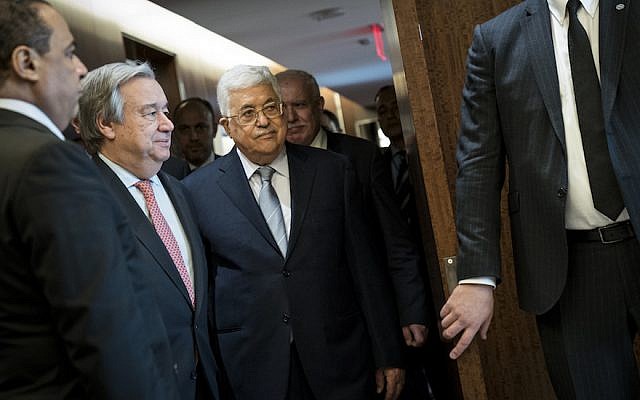 Mahmoud Abbas, he of Holocaust denial fame, was saved by the bell last week, when Kuwait, a non-permanent member of the United Nations Security Council, prevented a US-sponsored condemnatory statement of the Palestinian leader for his anti-Semitic comments from moving forward.

Kuwait cited an apology by Abbas as mitigating any action against the president of the Palestinian Authority. It also called the measure “one-sided,” which, given the anti-Semitic tropes put forward by Abbas in a “history lesson” speech in Ramallah, it certainly was — against Jews.

The Security Council statement, introduced by US Ambassador Nikki Haley, called out Abbas for “vile anti-Semitic slurs and baseless conspiracy theories, and do not serve the interests of the Palestinian people or peace in the Middle East.”

Given Abbas’ history of Holocaust denial and minimization, his remarks came as less a surprise than a confirmation that his views about history’s worst crimes have not changed. He said very clearly that Jews had brought the Holocaust on themselves. He then leavened his remarks with other charges that have increasingly been a part of his public utterances, including Israel being a “colonialist” enterprise, and that Ashkenazi Jews are interlopers, and not real Jews.

To be sure, Abbas’ comments, when they became known, were roundly criticized. Britain’s top foreign office official called them “deeply disturbing,” while Germany’s new foreign minister issued a strong statement, calling Abbas’ “anti-Semitic remarks” unacceptable; the new UNESCO secretary general termed “all forms of anti-Semitism, including Holocaust denial and relativization unacceptable.” Even the New York Times Editorial Board, which in the past had promoted Abbas as a worthy partner for peace, said that “by succumbing to such dark, corrosive instincts, he showed that it is time for him to leave office.”

Which brings us back to the stymied effort to adopt a Security Council statement. Kuwait cited Abbas’ May 3rd “apology” as the principal reason for tossing the US effort aside. As a statement of contrition, the apology was rather boilerplate: “If people were offended,” said Abbas, “especially people of the Jewish faith, I apologize to them.” He pledged “full respect for the Jewish faith and other monotheistic faiths.”

“If” people were offended?

The Abbas apology had the look and feel of a quickly-done throw-away that could have come from a damage control team at a public relations firm. For 50 years, he has been dismissing the Jewish people’s connection to its historic homeland, encouraging his minions to utilize the United Nations and its agencies to erase Jewish history (next up: the Dead Sea Scrolls, whose ownership will be challenged at the World Heritage Committee next month); allowing Palestinian schools to inculcate raw hatred against Jews; and minimizing the number of Jews killed in the Holocaust. Indeed, his now well-publicized doctoral dissertation on the subject seems to have been nothing but a warm-up for his most recent barrage of offensive comments.

For decades, many of the same folks who finally saw fit to criticize Abbas were mum on years of anti-Jewish incitement from the official Palestinian camp. It was either written off as just rhetoric for home consumption, or ignored altogether. Abbas is not the first Palestinian leader to engage in this kind of language; Yasser Arafat, his predecessor and mentor at the Palestine Liberation Organization, was a full-time peddler of revisionist history and inflammatory rhetoric.

But Abbas has repeatedly been presented as the last, best hope for peace and a partner on the way to a two-state solution. Over the decades, as each attempt at effectuating an agreement fell by the side of the road, international opprobrium has largely been heaped on Israel. Like Arafat, who is said to have told US President Bill Clinton that the Jews have no connection to the Temple Mount, Abbas has for years made the same kinds of outrageous comments, which have repeatedly fallen on deaf ears in the international community, and been left off the hook.

If you deny the Holocaust, or say Jews brought it on themselves because of their “social behavior;” if you allow children to be taught that Jews are hiding behind rocks and trees waiting to kill Palestinians; if you write Jews out of their own history because you say your narrative in the region is the only one that counts; and if, after being caught in public saying all of this for the umpteenth time, you then “apologize” to those who might be offended, then what kind of partner for peace can you be?

Shame on the other members of the Security Council for trying to wish this all away by accepting Abbas’ hollow apology.

The statement introduced by Haley called for a “firm and unequivocal rejection of anti-Semitism and Holocaust denial,” and demanded that Abbas “refrain from anti-Semitic comments.”

Why would one now believe this apology after a lifetime of engaging in this type of rhetoric? The only difference is, this time he got caught. The Security Council should not have let him off the hook.

Was that too much to ask?

Daniel S. Mariaschin is Executive Vice President and CEO of B’nai B’rith International. He directs and supervises B’nai B’rith programs, activities and staff around the world.