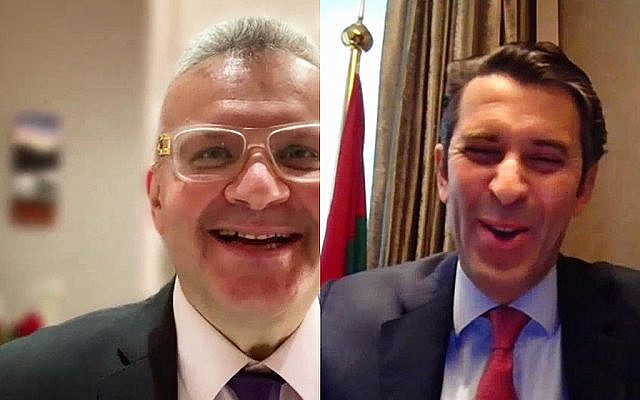 “Normalization” is possibly the most understated word to describe the seismic changes triggered by the signings of the Abraham Accords.

Israel, the United Arab Emirates and Bahrain entered a new era of peace and understanding, brokered by President Donald Trump’s US Administration and signed at the White House in September.

But the speed at which the peoples of Israel and the UAE are realising the opportunities made possible by diplomacy is quite breathtaking.

Expressions of religious similarity and mutual understanding, physical and economic links and recognition of multiple opportunities deliver hourly headlines across the world.

Including my podcast interview with His Excellency, Ambassador Mansoor Abulhoul, recorded just as the Knesset in Israel ratified the treaties.

“Now we can truly understand what Israel means to the UAE, to the Arab world and Muslim community. To move from decades of general indoctrination, to remove those ideological restraints to actually build bridges on multiple levels and tackle some of the pressing issues through dialogue”, Mr. Abulhoul told me.

It was a conversation of warmth and hope which wouldn’t have been possible even a month ago.

“The diplomatic breakthrough was a pleasant surprise”, said His Excellency although a warming relationship between the two countries has been brewing for some time.

And maybe this is the kicker to explain all of this, the key which has unlocked the sudden change of political temperature in the region.

In my interview with Jason Greenblatt, President Trump’s former chief Middle East negotiator, himself an Orthodox Jew, told me he believed his religious beliefs were actually a benefit not a hindrance in a region where religion is so important.

The UAE’s Minister of State for youth affairs, Shamma Sohail Al-Mazrui made a memorable comparison between the Jewish Shabbat and the Muslim prophet Mohammed’s call for a regular renewal of peaceful values in a Zoom conversation to the Emirati Jewish community.

Mr. Abulhoul has strong personal ties to the UK. His mother, who has lived in the UAE since 1968, was born in Britain, she’s from Cambridge. He also attended school in the UK and Leeds University where he studied Arabic and politics.

“On so many levels, the UK and the Emirates have a wonderful connection”, the Ambassador told me.

But what of the Palestinians? What difference to their future can normalization provide? Can this peace create positive leverage in the face of Palestinian rejectionism?

The Ambassador disagreed with this characterisation of the Palestinians, calling theirs a “just cause” and pointing out the Abraham Accords halt annexation (as he called it) of the West Bank.

Mr. Abulhoul’s been in office since 2019 and a priority for his diary will be to meet Israel’s new UK Ambassador, Tzipi Hotevely, who has just arrived in London to replace the outgoing Mark Regev, who returned to Jerusalem as Prime Minister Benjamin Netanyahu’s senior advisor.

His Excellency called the UAE “a peace-building nation” and pledged to join the Israeli embassy in the UK’s own commitment to eradicating antisemitism from Britain.

The move towards a Middle East 2.0 has since been extended. Jordan, who already signed up for peace with Israel in 1994, take that deal a step further, allowing flights to cross each other’s airspace. The agreement will significantly shorten the length of flights from Israel to the Gulf and East Asia, cutting the time it takes to travel between countries and cutting fuel costs and pollution.

Whispers of feverish diplomacy involving Sudan and speculation that the Saudis will sign up to normalization with Israel if Donald Trump beats Joe Biden to win a second term as US president show that amid lockdowns and international Covid paralysis, there is a vision to cooperation, peace and understanding.

Jonny Gould’s Jewish State podcast is available wherever you get your podcasts.

Watch the video of this interview on Jonny’s YouTube channel.