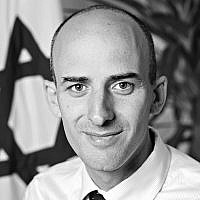 The Blogs
Yiftah Curiel
Apply for a Blog
Please note that the posts on The Blogs are contributed by third parties. The opinions, facts and any media content in them are presented solely by the authors, and neither The Times of Israel nor its partners assume any responsibility for them. Please contact us in case of abuse. In case of abuse,
Report this post.

Media coverage of Israel abroad is one of our favorite topics of complaint as Israelis; the story goes that we’re given a bad rap by ignorant journalists who are biased or unprofessional or anti-Semitic, or all of the above. But does this sentiment stand up to serious scrutiny?

One of the first things I encountered when I started my four-year posting as our embassy’s spokesperson in London, is the incredible interest in Israel among British journalists: Our hi-tech and entrepreneurship skills, our strategies for fighting terror and developing cyber are all well-covered, and this trend has only increased as the realisation sets in that Israel today shares more challenges with its European partners than ever before.

Major news organizations such as BBC and SKY employ thousands of journalists with divergent opinions. Mistakes are made but are generally corrected swiftly; guidelines on Mideast coverage should definitely be improved, but on the whole, I believe that Israel today is covered in a more nuanced, contextual manner by the mainstream broadcast media.

However, turn your head to the left-of-center media landscape, and the difference is stark: Here, the Guardian and Independent lead an ideological world view that isn’t even centered on Israel, but on the belief that the West is responsible for the world’s woes. This outlook, combined with a patronizing, dismissive attitude towards the peoples of the Middle-East, is the lens through which Israel’s actions are scrutinized, using a custom built magnifying glass which is never applied elsewhere, least of all on our neighbors.

One of the most fitting metaphors for this phenomenon is the play “My name is Rachel Corrie”, which is being staged again in London this summer, more than a decade after its original debut. It tells the story of an American ISM activist killed in a tragic accident in Rafah in 2003, after stepping out in front of an IDF bulldozer in a closed military combat zone. The play is constructed from excerpts of Corrie’s diary, as edited by the Guardian’s current editor, Katherine Viner.

In the play’s final scenes, Israel’s actions in Gaza as described as “truly evil”, while shortly afterwards, the “truly evil” becomes reality, as an account of Corrie’s colleague is read out, recounting how an IDF bulldozer intentionally ran her over and killed her. No matter that this account is a fabrication; no matter that Israel’s District and Supreme Courts rejected this story based on the testimony of independent experts – including those representing the Corrie family – and the IDF’s own original radio recordings of the incident, which proved beyond doubt that the Bulldozer operator had not and could not have seen Corrie, and that her death was a tragic accident. No matter, because this isn’t a court case but a work of art, a play.

Yet the irony is that the Guardian’s coverage of Israel, which I’ve followed closely these past four years, bears a striking resemblance to this fictional description exemplified in the play produced by its now-editor: An emotional, subjective reading of reality, in which Israel is not merely in the wrong, but exceptionally and irredeemably evil, a place where a journalistic “state of exception” exists and objective truth can be bent or disregarded altogether.

This attitude, together with a disproportionate focus on Israel which can only be described as an obsession, is why the country whose territory on the world’s atlas is too small to write its name inside it (to borrow a euphemism from Efraim Kishon) is still too often the subject of endless diatribes, selective scrutiny and double standards.

Still, I’m ending my term and going home this summer with an optimistic feeling, having seen throughout these four years how journalists and media organisations are discarding outdated worldviews, looking instead at what Israel offers the region and beyond. Meanwhile, the absurdity of the left-wing media’s outlook has been laid bare; even as the rise of ISIS, the growing menace of Iranian influence, and the horrors perpetrated in Syria, have not bumped forward their broken record, still stuck on one word: Israel, Israel, Israel.