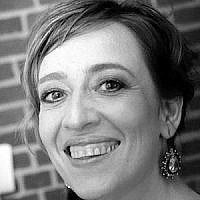 The Blogs
Izabella Tabarovsky
Apply for a Blog
Advertisement
Please note that the posts on The Blogs are contributed by third parties. The opinions, facts and any media content in them are presented solely by the authors, and neither The Times of Israel nor its partners assume any responsibility for them. Please contact us in case of abuse. In case of abuse,
Report this post.

Virtually lost behind the headlines, last week marked the 74th anniversary of the Babi Yar massacre. On September 29-30 of 1941, nearly 34,000 Jewish residents of Kyiv were murdered in the Babi Yar ravine on the outskirts of Kyiv. It was the largest massacre of the Holocaust to date, and it remained among the largest ones at the conclusion of the war. At least one member of my own family, the matriarch of a once-large clan, perished in Babi Yar in those first two days. But the violence didn’t end there. The site continued to be used until 1943, witnessing an estimated 100,000-150,000 deaths, among them Jews, Roma, members of Ukrainian nationalist movement, prisoners of war, Orthodox clergy, the mentally ill, and other “undesirables.”

Ukraine hasn’t had the easiest time confronting the problem of the Holocaust. It is estimated that over 1,000 Holocaust sites in Ukraine remain undocumented. And in a country where close to one million Jewish citizens were systematically murdered there still isn’t a Holocaust museum.

To some extent, Ukraine’s unease with the subject can be attributed to its Soviet past. The Holocaust was not part of the Soviet history curriculum. Soviet historians treated Nazi atrocities as violence perpetrated equally against all Soviet citizens as a matter of policy, without identifying Jews as having been singled out for annihilation. This policy is reflected in the inscription on the monument installed by the Soviets at Babi Yar in 1976. The statue is dedicated first and foremost to “Soviet citizens and prisoners of war and officers of the Soviet army who were shot by German fascists in Babi Yar.” Jewish citizens are mentioned, but only further down the line on the inscription.

I could see this reflected in many conversations I had on the subject during a recent visit to Ukraine. I spoke with senior staff of one of Kyiv’s museums and asked her about the possibility of a Holocaust-related exhibition. She demurred, suggesting that it would be better to have an uplifting show on Jewish culture. Ukraine has experienced so much tragedy, she said; it would be better to do something positive. In virtually every conversation, I noticed that my interlocutors would point out that Babi Yar hadn’t been just a Jewish tragedy: so many people of all ethnic groups died there. This is undoubtedly true, and yet this subtle shift in emphasis draws attention away from the fact that the Holocaust was specifically about the annihilation of Jews as an ethnic and religious group.

Against this background, the recent announcement by the Ukrainian government of a planned high-profile commemoration of the 75th anniversary of Babi Yar stands out as an opportunity to move forward the national conversation about this painful subject. The initiative, signed into law by President Petro Poroshenko on August 12, is intended “to unite the [Ukrainian] society’s efforts to prevent the repetition of crimes against humanity, to unite the people around the idea of building in Ukraine a rights-based state that is able to protect all its citizens.” The effort is to be overseen at the highest level by the Ukraine’s Prime Minister and head of Presidential Administration.

Preparations are already under way. Peter Zalmayev, Executive Director of the Eurasia Democracy Initiative and board member of the New York chapter of the American Jewish Committee, who is involved in the project, told me that the Ukrainian government is trying to decide on the best way to commemorate the event. The government is planning to commission new artwork, conduct a series of educational initiatives and invite a scholarly conference to commemorate the event. It also appears that the commissioning of a new monument may be under consideration. Local and international Jewish organizations are expected to play a prominent role.

The commemoration will have an important symbolic value. From the time of the 2014 Euromaidan revolution, the Kremlin has frequently flung accusations of anti-Semitism at Ukraine. Both the government and Ukraine watchers have consistently rebuffed these as provocations. And the truth is that the number of anti-Semitic incidents in Ukraine remains very low in comparison with many other countries. Instances of desecration of Jewish sites persist (Babi Yar alone has been vandalized six times this year), and there is no doubt that even a single anti-Semitic incident is one too many. But just to put things into perspective, there were 851 anti-Semitic incidents in France in 2014 – twice as many as in 2013. The UK similarly saw the number of incidents double, to reach 1,168 in 2014. And in its survey of the United States, the Anti-Defamation League referred to 2014 as a “particularly violent year for Jews”: that year saw a 21 percent increase of incidents in the U.S., from 751 in 2013 to 912 in 2014.

In contrast, there were 23 such incidents in Ukraine in 2014. Even assuming massive underreporting, the difference in scale is striking. The government has consistently demonstrated its eagerness to investigate the incidents and to work with representatives of the Jewish community to address them appropriately. And there is a wide-spread view that many of the anti-Semitic incidents occurring in Ukraine are sponsored by the Kremlin to discredit Ukraine’s image. Mr. Zalmayev, who spoke at a conference on Ukraine’s national minorities held last week in Washington, DC, said that the Kremlin had “gambled from the beginning on the Jewish card.” Moscow worked with diaspora communities in the U.S. and Israel, he said, “to play up the card of Ukraine being run by a fascist junta.”

Representatives of Ukraine’s Jewish community I’ve spoken with have consistently emphasized the absence of overt anti-Semitism in Ukraine. So have the Israelis I’ve talked to who frequently travel to Ukraine. In fact, what I saw in Ukraine, if anything, was admiration for Israel and an increasing sense of kinship toward a country that, similarly to Ukraine, faces an existential threat. I have to admit that, contrary to my own original skepticism, I left Ukraine with a distinct feeling that at a time of growing anti-Israel rhetoric worldwide, Ukraine might just be the one place where Israel is supported fully and wholeheartedly.

The planned commemoration of the 75th anniversary of the Babi Yar tragedy will help to communicate this message to the world. But if Ukraine is to achieve real and long-lasting value from this opportunity, the government should seek to go beyond the symbolic. This is an opportunity to break through the fears surrounding frank discussion about the Holocaust and develop a national conversation that will lead to a deeper understanding and, ultimately, greater national unity. It should involve educators with experience in communicating information about the Holocaust to different age groups and people from different walks of life. Experts on peace and reconciliation should also be invited to participate. Rather than limiting the commemoration to events surrounding the immediate date of the tragedy, the government should use this as a chance to plant seeds that will continue to bear fruit far beyond that date.

About the Author
Izabella Tabarovsky is passionate about Jewish life and Israel. She grew up in Russia, has lived in the U.S. for over 25 years, and travels frequently to Israel. She works at the Kennan Institute in Washington, DC, where she focuses on the politics of historical memory of the Holocaust and Stalin's repressions in the former Soviet Union. Her writings have appeared in Newsweek, The Tablet Magazine, Times of Israel, Jerusalem Post Ivrit, The Wilson Quarterly, Kennan Cable, Russia File, and Science and Diplomacy, among others. The views expressed here are her own.
Comments