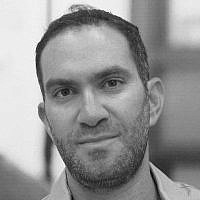 The Blogs
Ami Steinberger
Apply for a Blog
Please note that the posts on The Blogs are contributed by third parties. The opinions, facts and any media content in them are presented solely by the authors, and neither The Times of Israel nor its partners assume any responsibility for them. Please contact us in case of abuse. In case of abuse,
Report this post.

Covid-19 has wreaked havoc on all of our lives and institutions. Nonetheless, some blessings have come of it as well.

Two such blessings can be found in the ulpan-benefits package of Misrad Haklita (the Ministry of Immigrant Absorption): 1. Private-ulpan courses can now take place online (not just in-person), and 2. People who made aliyah anytime in the past 10 years (not just in the past 18 months) can take advantage.

That means that Sheila (not her real name) who made aliyah nine years ago to Mitzpeh Ramon (where Ulpan La-Inyan doesn’t have a branch) can finally learn Hebrew in a government-sponsored course of just four students, while stargazing from her מרפסת-mirpeset (balcony) overlooking the crater.

But what’s this private-ulpan benefit anyway? A little history:

1949 – Reviving the Hebrew language had been a mission for Zionists already for decades, but when the State of Israel was founded and Jews started making aliyah in the hundreds of thousands, the government decided to found an institution that would end up earning the admiration of countries around the world. Thus was born Ulpan (literally, studio), where new immigrants learn the Hebrew language, itself a uniting factor for people from remarkably diverse backgrounds, as well as a foundation for their common peoplehood.

In the first few decades of the State, Ulpan as a public institution met an urgent need. But over time its methods became a bit antiquated, and its highly-demanding class schedule of 5 days a week for 5 months, 5 hours a day (plus homework), left little time for any other occupation. But more problematic was the fact that it wasn’t working optimally: its industrial class size of 25 or more left many students behind, not really picking up the language.

2015 – Seeing the need for something more suitable for the modern oleh, Misrad Haklita launched the private ulpan benefit with a pilot program serving olim from countries then suffering from heightened antisemitism – France, Belgium and Ukraine. Private ulpan (now not just for people from those countries) enables olim to attend a half-year course at a qualifying private institution, where they learn Hebrew in a small-group setting of 4-8 students. Classes take place at a convenient schedule and are fully-reimbursable by the Israeli government. Olim have the ability to take advantage of both this benefit as well as public ulpan.

But since she made aliyah from Australia, Sheila had to make do with her very rudimentary Hebrew in her small Negev town.

2017 – Misrad Haklita extended the private ulpan benefit to include olim from any country in the world. At that time Ulpan La-Inyan started offering its courses to English-speaking olim with a guaranteed refund from the Israeli government. But regulations required that students and teacher meet at a physical location, so olim who lived in the periphery or were homebound could not take advantage of this benefit. And since the benefit applied to olim from the past 18 months only, so many people who had made aliyah earlier – like our friend Sheila – were missing out.

2020 – The pandemic forced Misrad Haklita to allow private-ulpan courses to take place online (I hope this will continue beyond the pandemic, but that remains to be seen). Then, in November, Misrad Haklita took another major step in cementing private ulpan as a government policy: it extended the private-ulpan benefit to people who made aliyah anytime in the past 10 years.

So now, Sheila meets online twice a week with her friends Betty from Zichron Yaakov, Aaron from Jerusalem and Jacob from Tel Aviv (all fictional characters). Their Intermediate Hebrew course led by one of Ulpan La-Inyan’s fantastic teachers takes place 7-9 PM, so Betty can come home from work and decompress a bit before class, and Jacob can put the kids to sleep. As they progress with the course material that feels more like a brain (and mouth) workout than a traditional lesson, their ability to speak Hebrew with confidence grows from meeting to meeting, thanks to Ulpan La-Inyan’s Pimsleur-based methodology.

If you made aliyah in the past 10 years, you may be eligible for this extended private-ulpan benefit. Click here to see.

About the Author
Ami is the founder and CEO of Ulpan La-Inyan (ulpan.com), which teaches people to speak Hebrew with confidence in various locations throughout Israel as well as online. Ami publishes “Your Daily Dose of Hebrew”, a free service that allows English speakers around the globe to amass a knowledge of Hebrew one dose at a time.
Related Topics
Related Posts
Comments