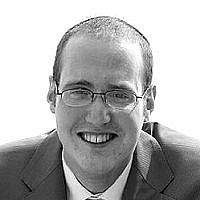 The Blogs
Simon Levy
Apply for a Blog
Please note that the posts on The Blogs are contributed by third parties. The opinions, facts and any media content in them are presented solely by the authors, and neither The Times of Israel nor its partners assume any responsibility for them. Please contact us in case of abuse. In case of abuse,
Report this post.
I’m pretty certain that I’m not alone in watching videos, seeing pictures and reading stories of the hundreds of people attempting to reach Uman this Rosh Hashana, and being left completely perplexed by their actions. This is meant in no way to impugn the memory or indeed Torah of Rabbi Nahman of Breslov, but to question, in no uncertain terms, the behaviour of those who claim to be following some religious instruction. Because when we investigate the matter a little closely, there are all manners of issues that people claim to have with the “pilgrimage”, but there’s one major one that seems to be lost in the vitriol hurled about this emotive issue. And it’s emotive because there’s something that many of us feel has been completely missed by those heading to Uman, instead of heading to a very different location.
And we only need look in a number of historical sources, spanning many centuries, to understand this visceral reaction. In our travels through dafyomi recently, we’ve seen the gemara discuss a special leniency enacted for wells found within public thoroughfares, whereby small corner boards are able to in effect create a boundary within which people can provide water for their animals, and in some cases even themselves, from the well. The gemara (Eruvin 20b) explains why these wells were deemed so necessary by the Sages, stating that, “Upright boards surrounding wells were only permitted to Festival pilgrims.”
The entire concept of aliya l’regel, whereby the entire community (at least the males) abandons their towns and cities and relocates en masse to Jerusalem for the entire duration of each and every festival (Devarim 16:16-7), is fascinating. Interestingly, we don’t see a practical example of this commandment having been performed in the times of the Written Torah, but we have some fascinating sources to demonstrate how this commandment maintained a place in the Jewish calendar long after the Temple was destroyed.
There’s a famous story, recorded in Sefer Hasidim, that states as follows:
“Rav Hai Gaon would ascend to Jerusalem from Babylonia every year on Sukkot. He would encircle the Mount of Olives on Hoshana Rabba (the last intermediate day of Sukkot) 7 times whilst reciting Psalms. In front of him would walk Kohanim wearing their finery, and behind him would walk many people.”
Now Rav Hai Gaon lived in the 10th/11th century, 1000 years after the destruction of the 2nd Temple, yet still felt the calling of our spiritual capital of Jerusalem once a year.
Another 300 years later, and the Tashbetz relates how in his day, the famous miracle that when the Jewish People came to Jerusalem there was always space for them, was once again realised. On Shavuot, there were over 300 people in “The Beit Knesset” in Jerusalem, and yet there was sufficient room for all of them.
And some 200 years later, at the start of the 17th century, the Maharil (I 134) writes that those Jews who continued to ascend to the Land of Israel every year demonstrated their love of the land (חיבוב ארץ ישראל).
So not withstanding the question of whether such a pilgrimage has any halakhic significance in the absence of a Temple, and our continued inability to bring a sacrifice, we have several major halakhic and religious leaders extolling the actions of those people who choose to travel to the Land of Israel, and in some cases, joining the pilgrimage themselves. The innate understanding that a regular journey to our physical and spiritual capital, Jerusalem, was a necessary part of one’s religious existence can be starkly contrasted with the erroneous belief that leaving the Land of Israel to journey to a far-flung grave site has similar merit.
And perhaps this explains our instinctive opposition to people, who in their thousands, choose to leave the Land of Israel for the festivals. It’s not that they’re leaving families behind, many of us do that for work and other reasons. It’s that they’ve somehow forgotten that the only place they should be is here in Israel, instead of gallivanting around Eastern Europe on a bizarre attempt to find a spiritual connection, instead of realising they’ve abandoned the one place where such a connection is guaranteed.
About the Author
Before making aliya, Simon worked in many roles within Jewish Education in the UK, including as the National Director of Bnei Akiva UK, teaching Jewish Studies and heading Mizrachi UK. In Israel, he has continued in the world of education, including as the Director of Education for Lavi Olami, an educational consultant for the National Library of Israel and Director of Educational Projects for the Shabbat Project. He writes in a personal capacity.
Comments