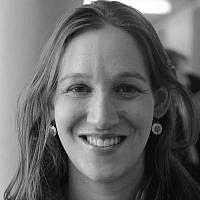 The Blogs
Rachel Fish
Apply for a Blog
Advertisement
Please note that the posts on The Blogs are contributed by third parties. The opinions, facts and any media content in them are presented solely by the authors, and neither The Times of Israel nor its partners assume any responsibility for them. Please contact us in case of abuse. In case of abuse,
Report this post. 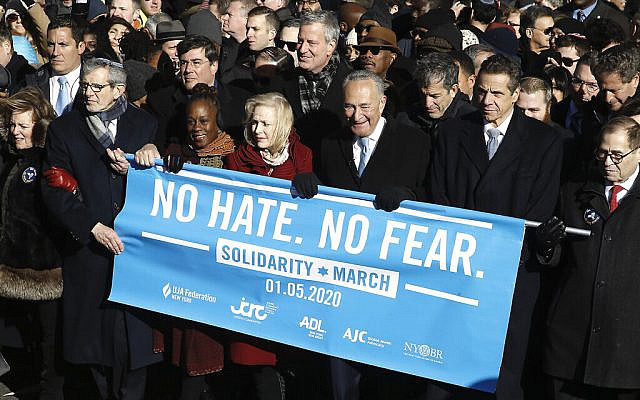 From right: Rep. Jerrold Nadler, Gov. Andrew Cuomo, Sen. Chuck Schumer, Mayor Bill de Blasio and Sen. Kirsten Gillibrand hold a banner at the march against anti-Semitism in New York City, Jan. 5, 2020. (John Lamparski/Echoes Wire/Barcroft Media via Getty Images) As anti-Semitic incidents have increased in New York City as well as the United States, demonstrators held no hate no fear solidarity march. Representatives from various Jewish organisations as well as marchers from around the country joined the New Yorkers to call for an end to religious bigotry.

“There she is!” he exclaimed, as he waved looking out toward the horizon. “Who?” I asked. “Lady Liberty,” his sweet voice responded. My soon-to-be 7-year-old was ecstatic to see her even from a distance as we marched with 25,000 people in New York City. What does the Statue of Liberty represent to you, Nadav? “Freedom!” he answered.

It is January 2020 and for most Jews living in America we didn’t believe that Jew-hatred would rear its ugly head in such a way. We must ask ourselves, are we truly free?

Sometimes Jew-hatred is explicit and unabashed while on other occasions it is cloaked in the dominant language of the age; religion, “scientific racism,” and now human rights and political correctness. The proponents of hatred therefore cannot be categorized in simplistic ideological or communal terms. This hatred traverses religious, racial, ideological, economic and sociological boundaries. Americans, and in particular, its Jews, are facing this challenge, but with too much hand wringing and consternation.

Jews historically are the first to be blamed during times of societal discontent and unrest. Scapegoating and the “othering” are clear signs of the fraying of democratic ideals, values and practices. Jews must take our collective experiences seriously and recognize the situation today from the venomous outbreaks on college campuses to the threatening attacks on identifiably traditional Jewish communities. We must ask ourselves how has this social disease remained socially acceptable in the 21st century in the most modern democracy to exist. In an age in which there are trigger warnings and micro-aggressions at every corner, how has Jew-hatred persisted?

Too often silence reverberates as Jews await protests from fellow citizens. The March was a response to that silence. Jews from all parts of the community joined to identify with the Haredi community in Brooklyn that has born the brunt of anti-Jewish violence in New York. The March was an expression of this shared sense of oneness.

But it was not the only expression. Last week, Jews around the world joined to celebrate the Siyum Ha-Shas, a ceremony at the culmination of studying daf yomi, the daily study of the Talmud. The 2,711 pages of rabbinic text takes seven and a half years to complete, and some 90,000 Orthodox Jews gathered at MetLife Stadium to rejoice in this accomplishment, in the most visible of ways.

It is estimated that some 300,000 Jews worldwide, from all communities and backgrounds, participated in the daily study. But only in America (and Israel) could one imagine such a public gathering of thousands of Jewish men and women proudly demonstrating their dedication to Jewish learning.

These two events, one somber and one joyous, are the bookends not only to the weekend but to the Jewish experience as a whole, standing up to hatred and rejoicing in deep engagement with our cherished texts. This is the reality Jews have always had to navigate. We must always be at the ready to ensure our survival and be prepared to denounce the hatred we know exists. Yet we cannot allow Jew-hatred to define our lives.

In last week’s Shabbat Haftorah, Ezekiel chapter 37 we read Ezekiel’s prophecy to unite two separate “sticks” or branches, Judah and Joseph, bringing them together into one. It is this unification — unabashed pride and defense of identity combined with the preservation of Jewishness through ritual practice, pursuit of literacy, the joy of living Jewishly, and the deep commitment to a sense of peoplehood. Each branch is necessary but alone neither is sufficient. In the previous chapter of Ezekiel, we also recall the image of the dry bones rising up and rejoining to return to life. So perhaps we need to remember that even we appear to be reaching a low in American Jewish history, from this position of despair, we have the ability for resurrection. Rather than feeling small and despair we must resurrect and not be afraid to show with pride our full Jewish identities.

Last night, I asked Nadav, “What was memorable to you?”

“The Statue of Liberty; she is freedom.”

“And what is freedom to you, Nadav?”

“Freedom means the Jews are free from hate. We marched but one march doesn’t change anything.”

“We keep marching! And learning!”

About the Author
Dr. Rachel Fish is a celebrated academic with 20 years of experience in the fields of Israeli history, Zionist thought, and Middle Eastern Studies. Recognized for her teaching prowess and pedagogical approaches, Dr. Fish has published extensively and is frequently called upon to advise on community interventions to reclaim an Israel discourse that is nuanced and complex while remaining accessible to a broad audience.
Related Topics
Related Posts
Rachel Fish
Comments