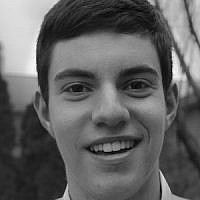 What is Israel advocacy? What does it mean to be an advocate for Israel? While the dictionary defines advocacy as to publicly recommend or support, I embrace Israel advocacy by educating about and discussing the Jewish state in a positive light, an honest light.

Although anyone can call him or herself an Israel advocate, to be an effective one requires courage and conviction built on a bedrock of clarity and facts, as noted by my friend Daniel Mael. With those tools and a pinch of charisma, truly anybody can be successful advocate for Israel.

But where? To whom? All good questions–allow me to backtrack a bit. A few years ago, inspired by Humans of New York, I started my very own people oriented photoblog: People of Boston. It encapsulated all I’d ever loved: people and their stories. I would approach people of all sorts: anyone from a fetid man asleep on the filthy subway ground, to prominent businessmen at important business meetings, to mesmerized lovers laying the grass in a world in which time was nothing more than a concept. This blog served to heighten my awareness, but more importantly break that invisible barrier between strangers that somehow always seeps into us, acting as a deterrent to strike up a conversation.

With that barrier broken, I now have the world at my fingertips. Every irrelevant stranger has become relevant, a potential friend. I often seize that potential with two primary purposes. The first a tad selfish: for my enjoyment, I’m an extrovert. The second is to advocate for Israel. Having consistently accumulated information about Israel since my semester there on AMHSI, I’m able to relate Israel to virtually any topic of conversation, including exploring the inter-cultural variance in haircut style (specifically payos) with my barber, expounding upon the incredible lengths the Israeli military goes to protect civilian lives in my History class, and even explaining the correct way to pronounce choomoos to the cashier at the supermarket.

Though some of these examples, certainly the last one, may appear to be mere joking they frequently initiate questions about Israel which may establish a meaningful dialogue.

And then—a crazy thing happens. Next time you get a haircut, your barber asks about a terrorist attack he saw on CNN last night. Or your History teacher asks you to teach the class about the 1967 war. And after that presentation, a student approaches you asking how he can get involved. And with that, the snowball begins to roll down the mountain.

About the Author
Andrew Jacobson is a first-year student at Brandeis University and passionate Israel activist. He is involved with AIPAC and was formerly an MZ-Teen Intern at StandWithUs and a Diller Teen Fellow.
Comments