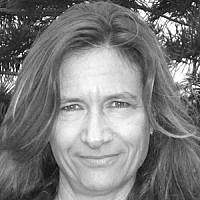 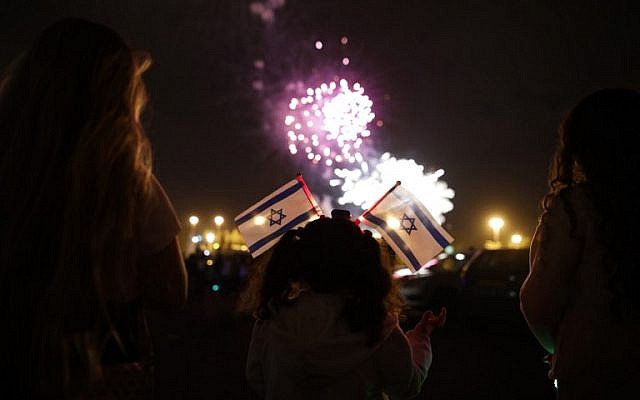 Israelis watch fireworks in the sky over Mount Herzl at the end of Israel's Memorial Day and at the start of Israel's 69th Independence Day celebrations, in Jerusalem, late on May 1, 2017. (AFP PHOTO / MENAHEM KAHANA)

It has been an accepted Israeli tradition: No sooner do Memorial Day ceremonies fade out with the singing of the “El Maleh Rachamim” prayer and wreaths laid on multiple graves of the fallen, then the shopping, partying and fireworks begin for Independence Day. Much has been written in praise of tying together the remembrance of those who died defending the nation with the celebration of the nation’s birthday.

But there are some Israelis for whom this coupling is painful, disrespectful and unnecessary. These Israelis, many of whom lost relatives in the military, would like to see Memorial Day separated from Independence Day.

“We should create a boundary between memorial and independence days so that the change from grief from celebration is not so dramatic,” said Yosef Tamir, a leader in this cause. “We human beings are not machines and need to have a pause between these events.”

Tamir, a Tel Aviv lawyer, speaks from personal experience. His father was Shmuel Tamir who devoted his life to government service, including as minister of justice in the government of Menachem Begin. When David, Shmuel’s son and Yosef’s older brother, was killed in a military helicopter crash in 1971, the family could not make the quick transition from grieving to celebrating the birth of the nation.

Both Tamir, and his nephew, Shmuel, who is named in honor of his late grandfather, propose that Independence Day is held a “a day or two” separately from Memorial Day. They suggest this is first tried on a trial basis and then reevaluated.

Tamir believes there is national support for such a change. He cites recent polls by a siblings’ bereavement organization and Walla showing that 70 percent of Israelis favor the untying of these holidays. An online petition has garnered more than 13,000 signatures.

Changing such a date would require a decree passed by the Knesset committee dealing with ceremonies and symbols. But although the Tamirs have been trying to call attention to this cause for several years they have failed to find a politician to take the initiative.

“It’s a very delicate and sensitive issue and I don’t see any politician willing to fight for it. You need to have a lot of courage to try to change,” said Tamir.

An attempt to generate interest within the Ministry of Defense also failed when supporters encountered the opposition of Asa Kasher, a prominent professor of Philosophy and of Ethics and author of the IDF Code of Conduct. Kasher, whose son was killed in the army, has written about the importance of combining these events:

“Sometimes, people tell us that it is hard for them to cross from Memorial Day into Independence Day. This testimony, however, is built on a misunderstanding. The combination of the two is not from all sorrow into all joy. Crossing from Memorial Day to Independence Day is like passing weight from one leg to another. From the leg that stands on grief, to the leg that stands for responsibility. And on both days, one leg stands here, and one leg stands there.”

Tamir believes the major obstacle is nothing more than an unwillingness to change something that has historically been a tradition. It is a tradition, that in his view, defies logic and sensitivity.

“We [the bereaved families] don’t need these two dates to have such a proximity to know that the death of our beloved ones led to the founding of Israel,” he said.

The Tamirs have not established an organization to fight this cause but describe themselves as a “working group of people united around a cause.” Among those involved is Yossi, 51, a teacher who as an army officer in an intelligence unit was called upon to preside over services at military ceremonies. He recalls one year being at Har Herzl, officiating by the gravesite of a soldier, and afterward being asked by his wife to buy milk at a supermarket.

“The transition from the gravesite filled with thousands of people mourning into a supermarket filled with people shopping for Independence Day was extremely painful and disorienting,” said Yossi. “Over 23,000 people gave their lives for Israel. Each one of them has parents, siblings, friends, sometimes a wife and kids who are mourning form them. We open their wounds every year, and then expect them to celebrate Independence Day a few hours later.”

He said he now makes it a rule not to do any shopping on that day, but to observe the “dignity and solemnity” of Memorial Day as a full day.

As for Tamir, he will spend Memorial Day with his family at Tel Nof base where they have an “impressive” ceremony. On Independence Day, he might go out to do something with his young daughters but in a “half-hearted way.”

“It feels awkward to participate in all these celebrations and doesn’t make any sense to me,” he said. “I prefer to stay at home.”